The turnkey contract was awarded t h r o u g h Morrison-Knudsen, acting as agent for the pipeline company.

The two SPMs will be built by EMH at the Tamese yard in Spain and installed off the East Coast of Panama in mid-1982.

According to Jean Alleaurre, EMH president, his firm already is building two CALM units similar to those ordered by PtP. 0:ie will be installed late in 1981 in the Rospo Mare field in the Adriatic for ELF-Italiana. A second buov is being constructed for Total-ABK and will be installed off Abu Dhabi in the Abu A1 Bu Khoosh field.

The PtP project will improve the distribution link between the North Coast Alaska oil fields and Atlantic ports. Currently, Alaska crude is shipped by supertanker to the Pacific terminus of the Panama Canal, transferred to c a n a l - s i z e t a n k e r s , shipped through the canal, then retrans- ferred to large tankers f o r transport to the final destination.

When the pipeline is operational, the crude will be pumped overland at a rate of approximately 800,000 bpd, bypassing the Canal completely. There will be tank farms at both ends of the pipeline, dock-unloading facilities at the Pacific terminus, and the EMH-built buoys on the Atlantic side.

EMH also has under construction a fixed-column SPM — Single Point Mooring — that will be installed at Cayo Areas off the Mexican Coast late in 1981. Operated by PEMEX, it will load tankers of up to 350,000 dwt. 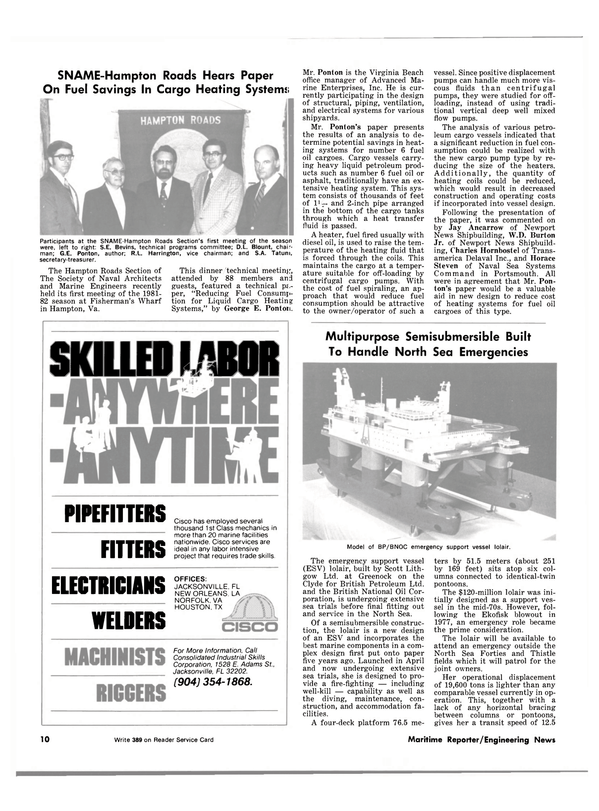