Forty years ago, the American Waterways Operators, Inc., was founded for the purpose of representing the national interests of the inland and coastal marine transportation industry. AWO was incorporated in 1944. On March 3-4, this premier organization will hold its Annual Meeting in Washington, D.C.

AWO's members include not only domestic waterways carriers and tugboat operators, but also the medium and small size shipyards throughout the country which construct and repair all types of equipment for the shallow- draft sector.

AWO closely follows developments that could impact on the industry, and provides its members with timely reports on issues of concern. The association also speaks out on legislative and administrative proposals of interest to the industry. In this regard, AWO places great emphasis on anticipating governmental actions and providing input during the developmental stages.

The primary objective of AWO is to promote the advantages of barge transportation — a safe, fuel-efficient and cost-effective mode — and to inform policymakers and the public of the vital role the industry plays in the nation's integrated transport system.

As everyone in the industry is well aware, two legislative areas of major importance to the waterways industry in the recent past deal with "user charges" and the future of the Title XI program. In addition, there is the ever-present competition from the less efficient rail and trucking sectors.

The collective efforts of AWO, along with those of other organizations within the industry, have contributed immensely to the success of the fight to save the Title XI program.

Title XI The Committee For Title XI Vessel Financing, not a part of AWO, is one such group that has worked diligently over the past months to create a more favorable attitude towards Title XI on the part of the government. Ben E. Fellows, president of Twin City Barge, Inc., of St. Paul, Minn., serves as president of the Committee. This group has succeeded admirably in prohibiting the Executive Department from arbitrarily limiting the amount of guarantees which can be issued and limiting the types of vessels which qualify for Title XI financing.

In a recent news brief, the Committee reported that Congress has prohibited Office of Management and Budget (OMB) ceilings or restrictions on vessel type f o r Title XI financing.

Thanks largely to Senator Robert Packwood (R-Ore.), the tax/ highway repair bill, which was signed into law recently, contained an amended section 1103(f) of Title XI to provide that: "No additional limitations may be imposed on new commitments to guarantee loans for any fiscal year, except in such amounts as established in advance in annual authorization Acts. No vessel eligible for guarantees under this title shall be denied eligibility because of its type." Senator Packwood, chairman of the Merchant Marine Subcommittee's parent Commerce Committee, is also on the Finance Committee. When the Gas Tax Bill came over from the House, he tacked on the amendment to Title XI. His amendment survived all the parliamentary permutations of the Gas Tax Bill, which was the last measure passed by the Senate before it shut down, December 23. The Title XI amendment was also the only piece of substantive maritime legislation enacted this session.

No longer can the Executive Department unilaterally and arbitrarily decree how much Title XI loan guarantee authority shall be released each fiscal year nor exclude vessels by type such as drilling rigs. The regulating mechanism as to the amount of Title XI financings will be an annual a u t h o r i z a t i o n act, first passed by Congress. In the absence of an authorization act (the condition now obtaining for FY 1983), the entire unobligated Title XI statutory authority — roughly $1.3 billion—is available for release. There is thus adequate authority available for the remainder of FY 1983 and part of FY 1984, but the program will have to be enhanced or it will die soon thereafter.

As a practical matter, the market probably will not absorb more than $900 million Title XI authority next year, coincidentally the amount approved by President Reagan at the Cabinet Council last August 5. But, the principle has been specifically embedded into law that Congress —not OMB— will have a say in determining the annual level of Title XI utilization . . . one of the T i t l e XI Committee's major goals.

As far as other legislation is concerned, final passage of both the Maritime Deregulatory Bill and the MarAd Authorization Bill was blocked in the last week of the 79th Congress by Senator Howard Metzenbaum (D-Oh.), who threatened a filibuster if either were brought up.

House and Senate conferees on the MarAd Bill had earlier met December 10 and agreed to: 1) extend "build foreign" for one year, and 2) release $950 million Title XI authority for FY 1983.

Unofficially, Senate staffers had offered their House counterparts $3 billion in new Title XI authority in exchange for a three-year "build foreign" provision. Because the House Merchant Marine Committee wants to force the Administration to propose an overall maritime program next year, the offer was turned down.

Although the MarAd Conference Report became moot after Senator Metzenbaum's refusal to let it come to the Senate floor, the negotiations did illustrate that Title XI had built up much support in both Houses.

One of the real spill-outs of Title XI Committee's lobbying effort this past year has been the C a r d education of staffers, members of Congress, Administration officials, who previously had only the vaguest notion of Title XI's mechanics and industry significance.

They have now an enormously better understanding and appreciation of the program.

Unfortunately the attention span of the Congress is short on any given issue. It is simply in the nature of things, with so many items clamoring for prominence and action. Persistent pressure of some sort is necessary to keep an idea alive; otherwise it just fades into oblivion.

All of which will confront Title XI Committee members with the question of whether they should now disband (as was the intent when the Committee was originally formed) and trust to luck, or should they maintain their cohesion in order to continue the push to extend Title XI's life.

It appears the recent successes call for more of the same from these dedicated individuals.

User Taxes An excellent summary of the situation regarding user taxes was contained in an article by Thomas L. Gladders, chairman of the board of AWO and president of G.W. Gladders Towing Company, Inc., which appeared in the January 1, 1983 issue of MARITIME REPORTER.

Mr. Gladders stated: "We first have to gain recognition by the policy makers in Washington, D.C., that the barge industry is an important link in the system.

We need a national policy that recognizes each mode of transportation has certain advantages, and that maximum benefits accrue from a system of diverse and highly competitive carriers — railroads, trucks, barges and pipelines.

"And to the extent that the federal government decides to recover, through user taxes, its investment in the transportation system, it naturally follows that all modes must be treated equitably.

To do otherwise gives the favored industries an unfair advantage that upsets the competitive balance.

"Fairness in cost recovery also requires that the Corps of Engineers and the Coast Guard allocate their expenditures not only to commercial vessel operators, but also among the many other beneficiaries of navigation programs. Frequently overlooked, however, is the fact that these two agencies also perform military and emergency preparedness missions. Their organizational structures and staffing levels exceed the requirements of peacetime operation of the inland waterways system, and certainly should not be subject to cost recovery.

"In fact, it would be wise for the government to consider transferring some federal responsibilities to the private sector to achieve better cost effectiveness.

Possibilities include maintenance dredging, aids to navigation and operation of locks. In this vein, the Coast Guard and the American Bureau of Shipping signed an agreement last year to accept ABS inspection of many vessel components.

"Finally, the federal government must continue its recent initiatives to reduce the regulatory burden on industry. This is particularly crucial in the area of dredging permits, where the process can hold up development for years on end due to paperwork delays and jurisdictional disputes among agencies." In his article, Mr. Gladders discussed the inland waterways improvement needs, and stated these should be viewed from three perspectives—needed structural improvements—federal polcies which should be pursued for a healthy waterways industry — and how to best achieve the type of waterways system we should have.

To achieve these goals, Mr.

Gladders urged: • First, continue to raise public awareness of our industry and the essential services it provides.

The barge industry suffers from a low level of public visibility and some gross public misconceptions regarding its operations, facilities and economic performance.

The American Waterways Operators has been attacking that problem through an improved publications program, a first-time ever series of radio spots, expanded press contacts, participation in a filmmaking project and an expanded speaker's bureau.

• Second, build even stronger alliances with associated industries, particularly those that depend on waterborne transportation for cost effective movement of their goods. The agriculture industry has been one of the barge industry's strongest supporters in the fight against waterway user taxes.

• Third, continue to participate more actively in the regulatory process, making our views known to federal agencies well before final rules are published.

• "Last, and certainly not least, is that old saw about getting involved in the political process. It may be an old saw, but for only for those of you who think I'm just talking about visiting the voting booth once every four years.

"The rest of you know I'm talking about personal visits to Members of Congress — wellplanned visits supported by logical factual material designed to help the legislator make an informed decision on key issues.

To supplement the periodic visits made by some of our members, our association has organized 'Congressional Visitation' programs during our Washington meetings the last two years. In each case, more than 70 personal visits were held with Senators, Congressmen and key staffers.

"I'm also talking about financial contributions to political candidates, personally and through political action committees. Contributions do not 'buy votes,' but they do help secure access to Members of Congress. And you need that access to effectively voice your concerns about legislative issues." AWO Structure The structure of AWO is provided by the Association's strong system of conferences and committees.

These groups lend focus and direction to AWO's efforts, and provide the industry expertise necessary to make those efforts a success.

The committees include officers and key professional employees of AWO member companies. Each member offers a high degree of interest in, and technical knowledge of, the particular issues facing the committee.

Committee appointments are made by the new Chairman of the Board following the AWO annual meeting in March. Terms are staggered so that only about one-third of each committee is replaced each year. Unless the subject matter is unique to a geographic area, all AWO regions normally are represented on each committee.

Most AWO committees meet often and rotate the meeting site to different cities. They keep abreast of developments in their fields, and bring them to the attention of the Board of Directors and members. The committees also draft, for Board approval, industry positions on important issues.

Special and ad hoc committees are organized to meet specific needs in technical or specialized areas, frequently f o c u s i n g on temporary problems. Special committees are terminated at the end of the year unless reinstated by the Board.

In recent years, three AWO conferences have been formed to strengthen Association activities in certain major areas. In 1978, the American Waterways Shipyard Committee was reorganized into a conference. And, in 1979, a Temporary Conference on Tank Barge Construction Standards was formed to address the Coast Guard's proposal to require double hulls on tank barges. Each of these conferences has its own committee structure. 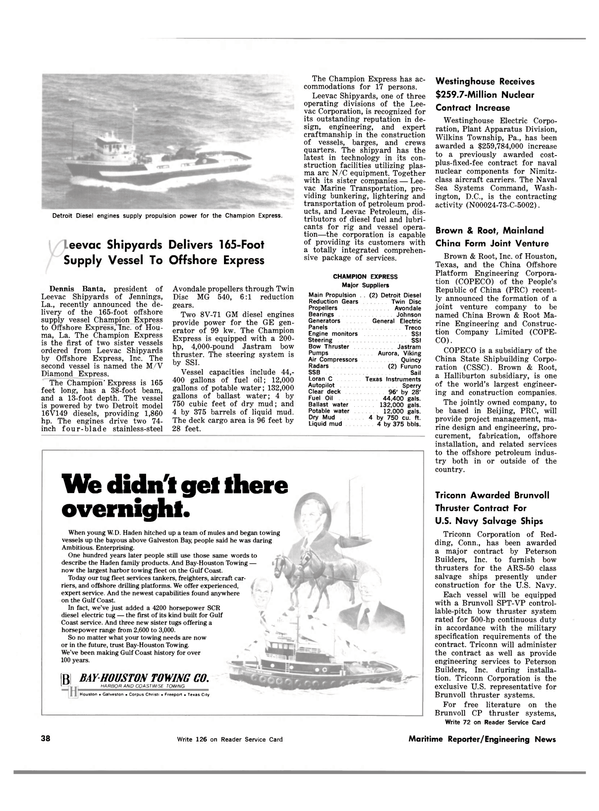