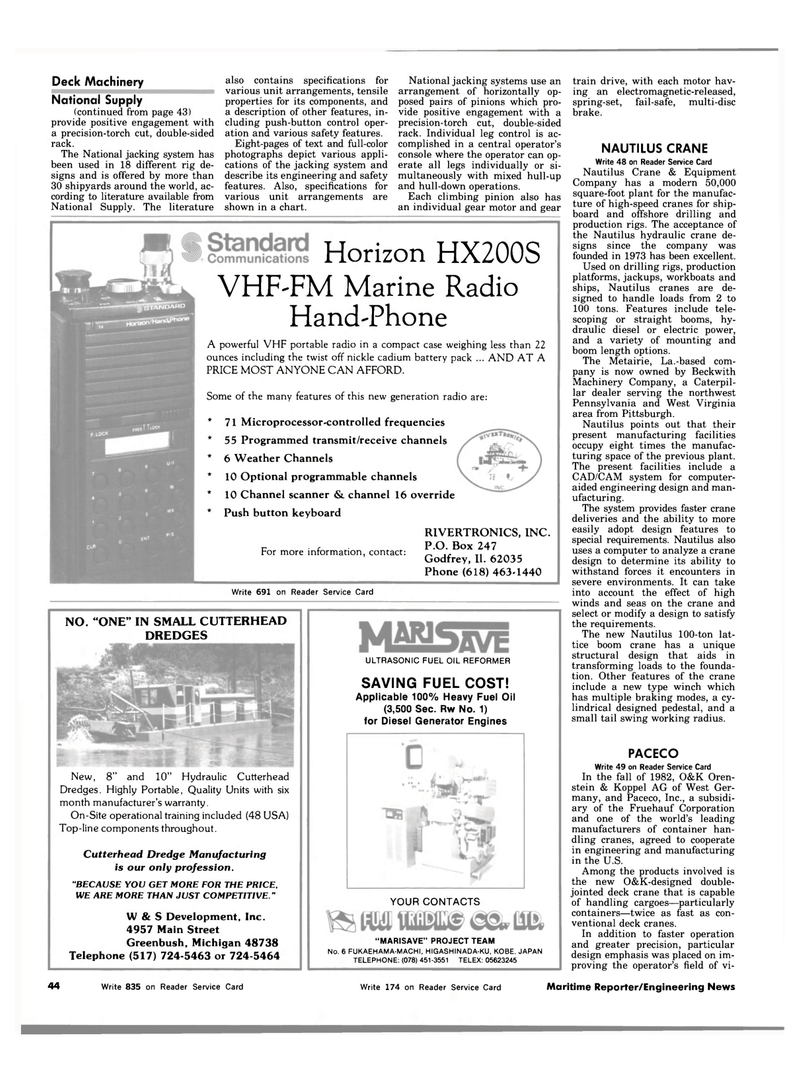 The National jacking system has been used in 18 different rig de- signs and is offered by more than 30 shipyards around the world, ac- cording to literature available from

National Supply. The literature also contains specifications for various unit arrangements, tensile properties for its components, and a description of other features, in- cluding push-button control oper- ation and various safety features.

Eight-pages of text and full-color photographs depict various appli- cations of the jacking system and describe its engineering and safety features. Also, specifications for various unit arrangements are shown in a chart.

National jacking systems use an arrangement of horizontally op- posed pairs of pinions which pro- vide positive engagement with a precision-torch cut, double-sided rack. Individual leg control is ac- complished in a central operator's console where the operator can op- erate all legs individually or si- multaneously with mixed hull-up and hull-down operations.

Each climbing pinion also has an individual gear motor and gear train drive, with each motor hav- ing an electromagnetic-released, spring-set, fail-safe, multi-disc brake.

Company has a modern 50,000 square-foot plant for the manufac- ture of high-speed cranes for ship- board and offshore drilling and production rigs. The acceptance of the Nautilus hydraulic crane de- signs since the company was founded in 1973 has been excellent.

Used on drilling rigs, production platforms, jackups, workboats and ships, Nautilus cranes are de- signed to handle loads from 2 to 100 tons. Features include tele- scoping or straight booms, hy- draulic diesel or electric power, and a variety of mounting and boom length options.

The Metairie, La.-based com- pany is now owned by Beckwith

Nautilus points out that their present manufacturing facilities occupy eight times the manufac- turing space of the previous plant.

The present facilities include a

The system provides faster crane deliveries and the ability to more easily adopt design features to special requirements. Nautilus also uses a computer to analyze a crane design to determine its ability to withstand forces it encounters in severe environments. It can take into account the effect of high winds and seas on the crane and select or modify a design to satisfy the requirements.

The new Nautilus 100-ton lat- tice boom crane has a unique structural design that aids in transforming loads to the founda- tion. Other features of the crane include a new type winch which has multiple braking modes, a cy- lindrical designed pedestal, and a small tail swing working radius.

In the fall of 1982, O&K Oren- stein & Koppel AG of West Ger- many, and Paceco, Inc., a subsidi- ary of the Fruehauf Corporation and one of the world's leading manufacturers of container han- dling cranes, agreed to cooperate in engineering and manufacturing in the U.S.

Among the products involved is the new O&K-designed double- jointed deck crane that is capable of handling cargoes—particularly containers—twice as fast as con- ventional deck cranes.

In addition to faster operation and greater precision, particular design emphasis was placed on im- proving the operator's field of vi-

A powerful VHF portable radio in a compact case weighing less than 22 ounces including the twist off nickle cadium battery pack ... AND AT A

PRICE MOST ANYONE CAN AFFORD.

NO. "ONE" IN SMALL CUTTERHEAD

Cutterhead Dredge Manufacturing is our only profession. "BECAUSE YOU GET MORE FOR THE PRICE,

WE ARE MORE THAN JUST COMPETITIVE. "