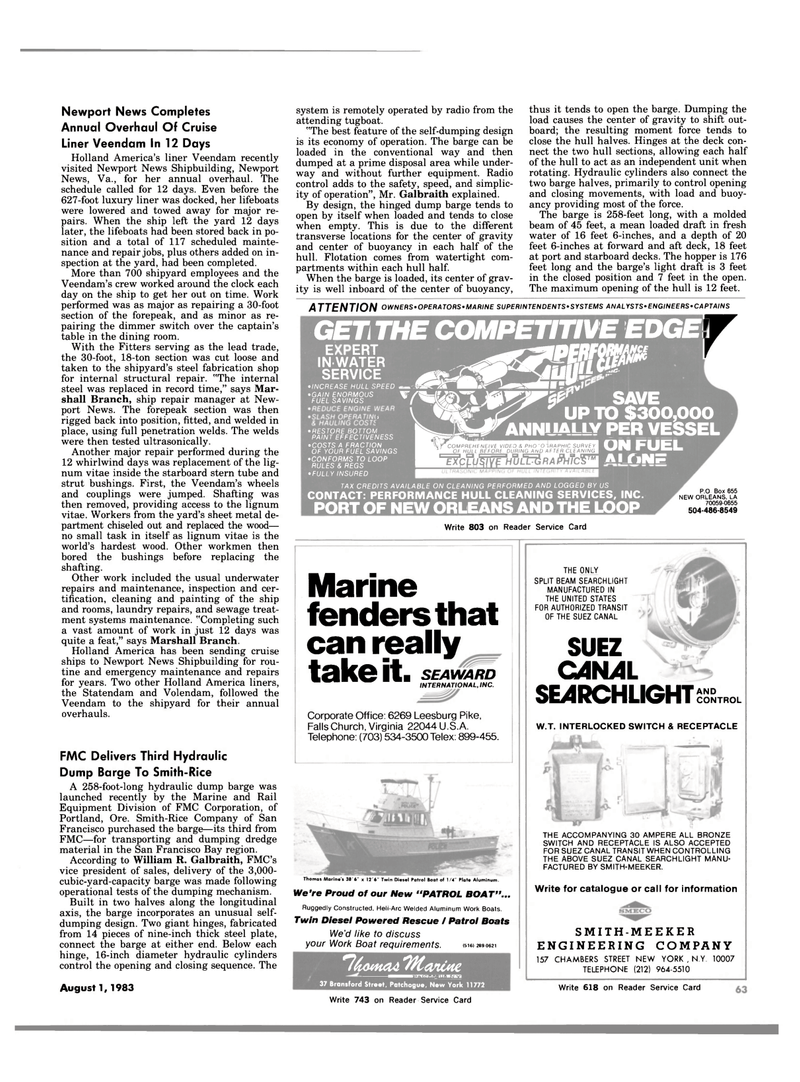 News, Va., for her annual overhaul. The schedule called for 12 days. Even before the 627-foot luxury liner was docked, her lifeboats were lowered and towed away for major re- pairs. When the ship left the yard 12 days later, the lifeboats had been stored back in po- sition and a total of 117 scheduled mainte- nance and repair jobs, plus others added on in- spection at the yard, had been completed.

More than 700 shipyard employees and the

Veendam's crew worked around the clock each day on the ship to get her out on time. Work performed was as major as repairing a 30-foot section of the forepeak, and as minor as re- pairing the dimmer switch over the captain's table in the dining room.

With the Fitters serving as the lead trade, the 30-foot, 18-ton section was cut loose and taken to the shipyard's steel fabrication shop for internal structural repair. "The internal steel was replaced in record time," says Mar- shall Branch, ship repair manager at New- port News. The forepeak section was then rigged back into position, fitted, and welded in place, using full penetration welds. The welds were then tested ultrasonically.

Another major repair performed during the 12 whirlwind days was replacement of the lig- num vitae inside the starboard stern tube and strut bushings. First, the Veendam's wheels and couplings were jumped. Shafting was then removed, providing access to the lignum vitae. Workers from the yard's sheet metal de- partment chiseled out and replaced the wood— no small task in itself as lignum vitae is the world's hardest wood. Other workmen then bored the bushings before replacing the shafting.

Other work included the usual underwater repairs and maintenance, inspection and cer- tification, cleaning and painting of the ship and rooms, laundry repairs, and sewage treat- ment systems maintenance. "Completing such a vast amount of work in just 12 days was quite a feat," says Marshall Branch.

Holland America has been sending cruise ships to Newport News Shipbuilding for rou- tine and emergency maintenance and repairs for years. Two other Holland America liners, the Statendam and Volendam, followed the

Veendam to the shipyard for their annual overhauls.

Equipment Division of FMC Corporation, of

Francisco purchased the barge—its third from

According to William R. Galbraith, FMC's vice president of sales, delivery of the 3,000- cubic-yard-capacity barge was made following operational tests of the dumping mechanism.

Built in two halves along the longitudinal axis, the barge incorporates an unusual self- dumping design. Two giant hinges, fabricated from 14 pieces of nine-inch thick steel plate, connect the barge at either end. Below each hinge, 16-inch diameter hydraulic cylinders control the opening and closing sequence. The

August 1, 1983 system is remotely operated by radio from the attending tugboat. "The best feature of the self-dumping design is its economy of operation. The barge can be loaded in the conventional way and then dumped at a prime disposal area while under- way and without further equipment. Radio control adds to the safety, speed, and simplic- ity of operation", Mr. Galbraith explained.

By design, the hinged dump barge tends to open by itself when loaded and tends to close when empty. This is due to the different transverse locations for the center of gravity and center of buoyancy in each half of the hull. Flotation comes from watertight com- partments within each hull half.

When the barge is loaded, its center of grav- ity is well inboard of the center of buoyancy,

Marine fenders that can really take it. seaward

We'd like to discuss your Work Boat requirements. tsisi as-oeji

Hfi/Mttu tttcwivie ^^MJIO,,.,-!,!.,.^ 37 Bransford Street, Patchogue, New York 11772 thus it tends to open the barge. Dumping the load causes the center of gravity to shift out- board; the resulting moment force tends to close the hull halves. Hinges at the deck con- nect the two hull sections, allowing each half of the hull to act as an independent unit when rotating. Hydraulic cylinders also connect the two barge halves, primarily to control opening and closing movements, with load and buoy- ancy providing most of the force.

The barge is 258-feet long, with a molded beam of 45 feet, a mean loaded draft in fresh water of 16 feet 6-inches, and a depth of 20 feet 6-inches at forward and aft deck, 18 feet at port and starboard decks. The hopper is 176 feet long and the barge's light draft is 3 feet in the closed position and 7 feet in the open.

The maximum opening of the hull is 12 feet.

PORT OF NEW ORLEANS AND THE LOOP

THE ACCOMPANYING 30 AMPERE ALL BRONZE

SWITCH AND RECEPTACLE IS ALSO ACCEPTED

FOR SUEZ CANAL TRANSIT WHEN CONTROLLING

THE ABOVE SUEZ CANAL SEARCHLIGHT MANU-

Write for catalogue or call for information

OF THE SUEZ CANAL