The Desire To Reduce Shipyard Production Manhours Leads Avondale To Production-Line Ship Construction During World War II, ships were built in the United States at a rate which may well have been the most productive in terms of ships per day being produced that has ever been accomplished. A major reason for that productivity was that many ships of the same type were constructed one after another in a given shipyard. This allowed utilization of special tooling and allowed personnel to become proficient in accomplishing the same task over and over again. In many ways, production-line techniques could be, and were, utilized in the construction. Another significant advantage was the ability to make large quantity procurements of equipment and materials. After World War II, the shipbuilding practices which had been common prior to the war became common again.

During the ensuing 20 years, shipyards in other countries, such as Japan and in Europe, were developed or modernized using upto- date production engineering principles. By the early 1970s it was clear that most shipbuilding in the world was being accomplished outside the United States.

One of the most notable efforts was the then new shipyard at Pascagoula, Miss., established by Litton/ Ingalls. It was based largely around automated machinery, a good flow of materials into the areas where fabrication took place, and a concept of building ships in large sections which were outfitted as they were being built. These sections were then welded together and launched, using a launch platform. These were very innovative steps which were well suited to building runs of several ships.

For another example, Avondale Shipyards (ASI) sent a team of engineers to Japan and to Europe as early as 1972 to investigate the techniques used by Japanese and European shipbuilders. Somewhere in that time frame, as the world demand for ships decreased, some of the Japanese companies decided that it was to their advantage to begin to export the technology which they had been using to build ships so effectively. The combination of these several efforts resulted, at Avondale, in a commitment by Avondale management to have a Japanese company, Ishikawajima-Harima Heavy Industries Co. (IHI), make an indepth study of the way Avondale was building ships and make recommendations to Avondale for things which could be done to improve productivity.

Consequently, a contract was signed in 1974 which resulted in five Japanese engineers being assigned by IHI to Avondale Shipyards.

These men have been participating directly with Avondale employees in the planning and construction of a new class of product carriers which Avondale had contracted to build for Exxon.

Recognizing the potential advantage to Exxon, as well as to Avondale, of the new techniques Avondale was trying to use, Exxon participated fully with Avondale in studies of the details of the ship design and with modifications to the ship design. This degree of involvement between the owner and the shipbuilder at this stage of the design process was unprecedented in ASI's commercial experience.

The result was a period of about six months prior to the actual award of the construction contract during which Avondale and Exxon engineers went through the design to identify to the maximum extent possible all major items of equipment and the system design of all systems which would be installed in the ship. The goal was to have a completely defined package decided upon prior to the award of the contract to build that package.

Although the design changes were important, the primary emphasis of this first effort at Avondale was directed at the production effort—at reducing production manhours. There are three major conceptual approaches which, in combination, have effected an entirely different approach to building ships at Avondale.

At each position, certain types of work are accomplished. After work on a unit is completed at one position, the unit is moved to another position for additional types of work to be done.

This results in many units of the ship being constructed simultaneously in different parts of the shipyard. Only after each unit is complete is it moved to the shipbuilding ways for assembly into the ship itself. Of course, we do erect these units on the ways, from the keel up and from the machinery space forward and aft, but the pieces which we erect are whole units of the ship with as much piping and equipment already installed as it is economical to do.

The process begins with an analysis of the entire structure of the ship, breaking it down into units which are suitable for handling with the shipyard cranes and other facility capacities. Under the tutelage of our Japanese advisors, Avondale production personnel classified each portion of the hull into one of six different categories, depending on the complexity of each category to be built. The simplest category is one constructed of flat pieces of material welded together. Fortunately, more than half of the units of the ship are constructed of these relatively easy-to-build units.

At least part of the. art of breaking the ship up into units is to select as many units as possible which can be constructed using the techniques associated with the less complicated categories. Then, again under the guidance of IHI advisors, Avondale set aside certain areas of the shipyard where this type of construction would be carried out exclusively.

The result is that in the areas where this type of construction is accomplished, the workers accomplish exactly the same kind of work each day. As they complete one section, the ship section moves to the next work site, and another section is constructed at the first site by the same people using exactly the same techniques. This then leads to the description of this process as a "production-line shipbuilding technique." Outfitting The second major change in technique is the installation of piping, ventilation and other systems on each of these units as they are being constructed. Thus, after one unit of the hull reaches the appropriate level of construction, it will be moved to a location in the shipyard where the pipefitters and ventilation people and other system installers will take over and install their systems. This is called "outfitting" the unit.

Following outfitting, the section of hull may go to a different spot in the shipyard where another piece of plate will be added to cover up that area that has just been worked on. In this way, each system is installed at the point of construction where it is most easily installed. One essential point to note at this point of construction is that the design of the entire piping system in that portion of the ship must already have been completed.

Thus, by the time the entire unit is ready to be erected at the erection site, the majority of all the internal work has already been accomplished. All that remains to be done is to join the piping systems in one unit to the piping systems in another unit with short lengths of pipe called connecting pieces. The wireways for electrical installations will be installed during this period but the cables actually are run after the units have been assembled.

Packaging The third major difference in construction technique involves utilization of so-called "package units." The package unit is a combination of related equipment, such as pumps, controllers, gageboards, etc., constructed and installed on their foundations and all piped and wired. It is completed as a package with the entire system constructed and tested before installation.

Engineering Now, concerning the engineering efforts. This requires a considerably different effort on the part of the design and engineering personnel in order to effect these savings for production personnel.

The entire design must be virtually complete before production can efficiently start. For example, the first production effort related to most pieces of steel structure is to cut the piece out of a larger piece. That is also the most efficient point of construction to cut all of the holes which must be cut in that piece. However, in order to know where to cut all the holes, the detailed design and routing of every piece of piping, or ducting, or electrical cable which will finally pass through that piece of steel must be complete.

The result of these many changes was a considerably larger engineering effort on this first project, compared to the "conventional" technique. However, the payoff was in the many fewer hours spent in production correcting the interferences between the larger and the smaller sections of piping.

In order to minimize the wastage of time it is mandatory that we know precisely what pumps, what engines, what gear, etc., will be installed in the ship as soon as possible after the design effort begins.

The results to date have been very satisfying to Avondale's management.

Needless to say, Avondale is not alone. Most other shipyards in this country are adopting the majority of these concepts in their building process today. So we can definitely say that the productivity of U.S.

Of course, production and engineering labor costs are not the whole cost story. Analyses of shipbuilding, whether in the U.S. or abroad, have demonstrated that approximately half of the cost of a commercial ship is in material.

Thus, even if we were to reduce manhours in half, we will still not be as competitive in the world market as we want to be until the material and equipment costs can be made competitive. 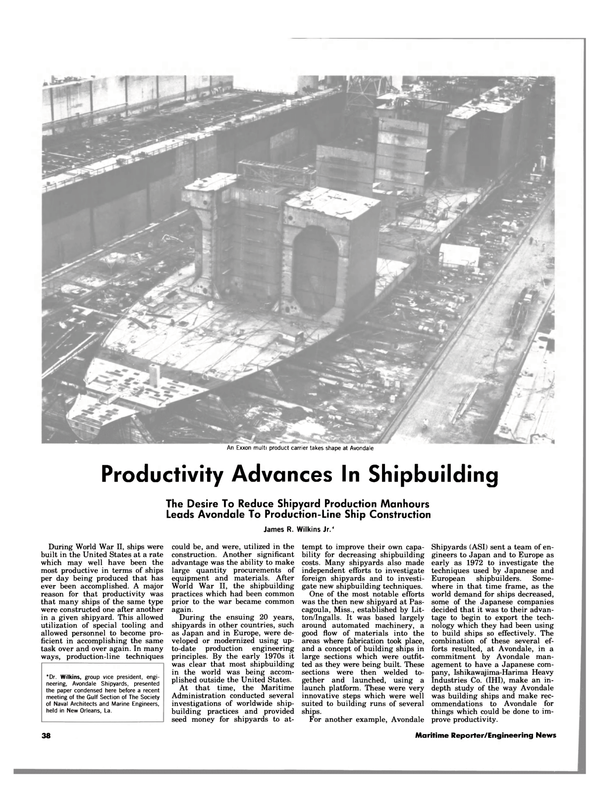