The crane ship Titan-1 (shown above) was delivered recently at the Wartsila Turku Shipyards in Finland.

Ordered by Sudoimport as the first in a series of four identical vessels, the Titan-1 is said to be the world's biggest catamaran ship, and is intended for hoisting and installation duties in the offshore oil fields.

She is a single-deck vessel, with engine room, accommodations, and bridge located far forward, and propulsion motor rooms, diving station, and workshops aft.

The propulsion machinery is dieselelectric.

Total output of the three diesel engines manufactured at the Wartsila Vasa factory is 7,550 bhp; output of two electric propulsion motors is 3,400 kw, and that of the two bow thrusters 800 kw. The vessel's speed is 11 knots.

Unlike most of the large offshore cranes today, the crane of the Titan- 1, manufactured by Kone Oy, is the center-pillar type, partly because it is situated on one of the hulls and because of the very high free space requirement under the boom. The capacity of the two main hooks is 300 tons each; together they lift 600 tons at an outreach of 128 feet, or 150 tons at 226 feet. Total installed power of the all-electric crane is 2,350 kw.

The vessel is equipped with complete offshore construction equipment, including steam hammer, pile-boring gear, automatic flame cutting and welding equipment, platform leveling equipment, and a diving station with decompression chamber for three divers and one doctor. The craneship, with its eight 10-ton anchors, can be moored in water depths of up to about 650 feet.

When hoisting, the catamaran concept is advantageous due to its inherent good stability. As the world's largest catamaran, the Titan- 1 was a formidable challenge to the Turku Shipyards. New calculation methods had to be developed as there were available neither classification society rules nor ready-to-use calculation methods concerning the seakeeping characteristics and the hull strength of a catamaran vessel of this size.

Two of the vessels in this series of four will be delivered in sections for assembly at a Soviet shipyard under Wartsila supervision. The transport will take place via the Volga waterway, the hulls separately and the deck and deckhouse in sections. 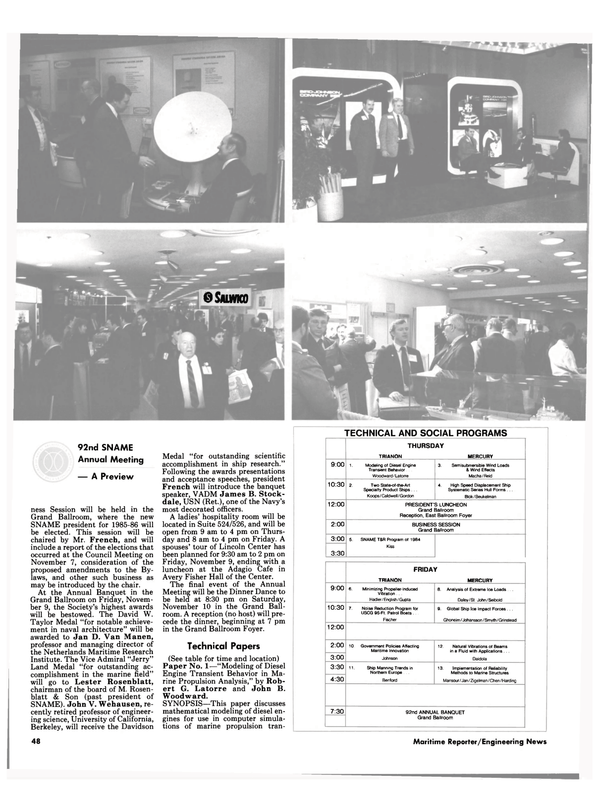