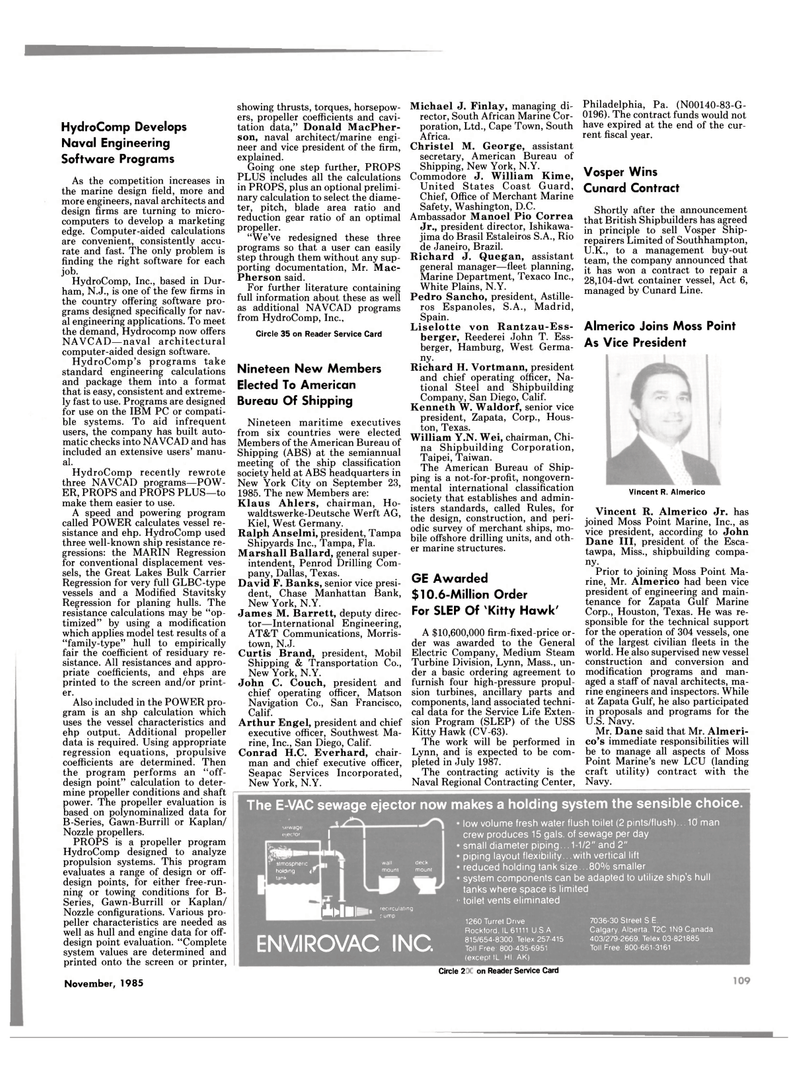 As the competition increases in the marine design field, more and more engineers, naval architects and design firms are turning to micro- computers to develop a marketing edge. Computer-aided calculations are convenient, consistently accu- rate and fast. The only problem is finding the right software for each job.

HydroComp, Inc., based in Dur- ham, N.J., is one of the few firms in the country offering software pro- grams designed specifically for nav- al engineering applications. To meet the demand, Hydrocomp now offers

HydroComp's programs take standard engineering calculations and package them into a format that is easy, consistent and extreme- ly fast to use. Programs are designed for use on the IBM PC or compati- ble systems. To aid infrequent users, the company has built auto- matic checks into NAVCAD and has included an extensive users' manu- al.

ER, PROPS and PROPS PLUS—to make them easier to use.

Regression for very full GLBC-type vessels and a Modified Stavitsky

Regression for planing hulls. The resistance calculations may be "op- timized" by using a modification which applies model test results of a "family-type" hull to empirically fair the coefficient of residuary re- sistance. All resistances and appro- priate coefficients, and ehps are printed to the screen and/or print- er.

Also included in the POWER pro- gram is an shp calculation which uses the vessel characteristics and ehp output. Additional propeller data is required. Using appropriate regression equations, propulsive coefficients are determined. Then the program performs an "off- design point" calculation to deter- mine propeller conditions and shaft power. The propeller evaluation is based on polynominalized data for

PROPS is a propeller program

HydroComp designed to analyze propulsion systems. This program evaluates a range of design or off- design points, for either free-run- ning or towing conditions for B-

Nozzle configurations. Various pro- peller characteristics are needed as well as hull and engine data for off- design point evaluation. "Complete system values are determined and printed onto the screen or printer,

PLUS includes all the calculations in PROPS, plus an optional prelimi- nary calculation to select the diame- ter, pitch, blade area ratio and reduction gear ratio of an optimal propeller. "We've redesigned these three programs so that a user can easily step through them without any sup- porting documentation, Mr. Mac-

For further literature containing full information about these as well as additional NAVCAD programs from HydroComp, Inc.,

Members of the American Bureau of

For SLEP Of xKitty Hawk'

The contracting activity is the

Shortly after the announcement that British Shipbuilders has agreed in principle to sell Vosper Ship- repairers Limited of Southhampton,

U.K., to a management buy-out team, the company announced that it has won a contract to repair a 28,104-dwt container vessel, Act 6, managed by Cunard Line.

Prior to joining Moss Point Ma- rine, Mr. Almerico had been vice president of engineering and main- tenance for Zapata Gulf Marine

Corp., Houston, Texas. He was re- sponsible for the technical support for the operation of 304 vessels, one of the largest civilian fleets in the world. He also supervised new vessel construction and conversion and modification programs and man- aged a staff of naval architects, ma- rine engineers and inspectors. While at Zapata Gulf, he also participated in proposals and programs for the

Mr. Dane said that Mr. Almeri- co's immediate responsibilities will be to manage all aspects of Moss