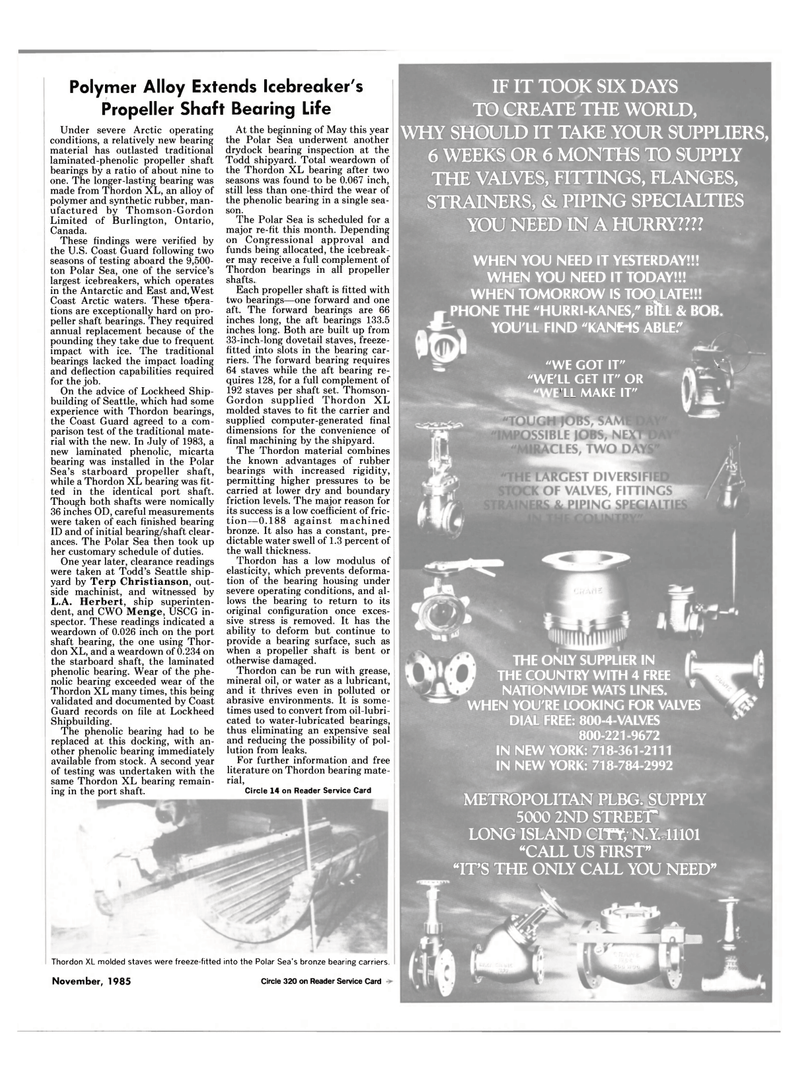 IF IT TOOK SIX DAYS

TO CREATE THE WORLD,

WHY SHOULD IT TAKE YOUR SUPPLIERS, 6 WEEKS OR 6 MONTHS TO SUPPLY

WHEN YOU NEED IT YESTERDAY!!!

WHEN YOU NEED IT TODAY!!!

WHEN TOMORROW IS TOO LATE!!!

THE ONLY SUPPLIER IN

THE COUNTRY WITH 4 FREE

WHEN YOU'RE LOOKING FOR VALVES

Under severe Arctic operating conditions, a relatively new bearing material has outlasted traditional laminated-phenolic propeller shaft bearings by a ratio of about nine to one. The longer-lasting bearing was made from Thordon XL, an alloy of polymer and synthetic rubber, man- ufactured by Thomson-Gordon

These findings were verified by the U.S. Coast Guard following two seasons of testing aboard the 9,500- ton Polar Sea, one of the service's largest icebreakers, which operates in the Antarctic and East and. West

Coast Arctic waters. These Opera- tions are exceptionally hard on pro- peller shaft bearings. They required annual replacement because of the pounding they take due to frequent impact with ice. The traditional bearings lacked the impact loading and deflection capabilities required for the job.

On the advice of Lockheed Ship- building of Seattle, which had some experience with Thordon bearings, the Coast Guard agreed to a com- parison test of the traditional mate- rial with the new. In July of 1983, a new laminated phenolic, micarta bearing was installed in the Polar

Though both shafts were nomically 36 inches OD, careful measurements were taken of each finished bearing

ID and of initial bearing/shaft clear- ances. The Polar Sea then took up her customary schedule of duties.

One year later, clearance readings were taken at Todd's Seattle ship- yard by Terp Christianson, out- side machinist, and witnessed by

L.A. Herbert, ship superinten- dent, and CWO Menge, USCG in- spector. These readings indicated a weardown of 0.026 inch on the port shaft bearing, the one using Thor- don XL, and a weardown of 0.234 on the starboard shaft, the laminated phenolic bearing. Wear of the phe- nolic bearing exceeded wear of the

Thordon XL many times, this being validated and documented by Coast

Guard records on file at Lockheed

The phenolic bearing had to be replaced at this docking, with an- other phenolic bearing immediately available from stock. A second year of testing was undertaken with the same Thordon XL bearing remain- ing in the port shaft.

Todd shipyard. Total weardown of the Thordon XL bearing after two seasons was found to be 0.067 inch, still less than one-third the wear of the phenolic bearing in a single sea- son.

The Polar Sea is scheduled for a major re-fit this month. Depending on Congressional approval and funds being allocated, the icebreak- er may receive a full complement of

Thordon bearings in all propeller shafts.:

Each propeller shaft is fitted with two bearings—one forward and one aft. The forward bearings are 66 inches long, the aft bearings 133.5 inches long. Both are built up from 33-inch-long dovetail staves, freeze- fitted into slots in the bearing car- riers. The forward bearing requires 64 staves while the aft bearing re- quires 128, for a full complement of 192 staves per shaft set. Thomson-

Gordon supplied Thordon XL molded staves to fit the carrier and supplied computer-generated final dimensions for the convenience of final machining by the shipyard.

The Thordon material combines the known advantages of rubber bearings with increased rigidity, permitting higher pressures to be carried at lower dry and boundary friction levels. The major reason for its success is a low coefficient of fric- tion—0.188 against machined bronze. It also has a constant, pre- dictable water swell of 1.3 percent of the wall thickness.

Thordon has a low modulus of elasticity, which prevents deforma- tion of the bearing housing under severe operating conditions, and al- lows the bearing to return to its original configuration once exces- sive stress is removed. It has the ability to deform but continue to provide a bearing surface, such as when a propeller shaft is bent or otherwise damaged.

Thordon can be run with grease, mineral oil, or water as a lubricant, and it thrives even in polluted or abrasive environments. It is some- times used to convert from oil-lubri- cated to water-lubricated bearings, thus eliminating an expensive seal and reducing the possibility of pol- lution from leaks.