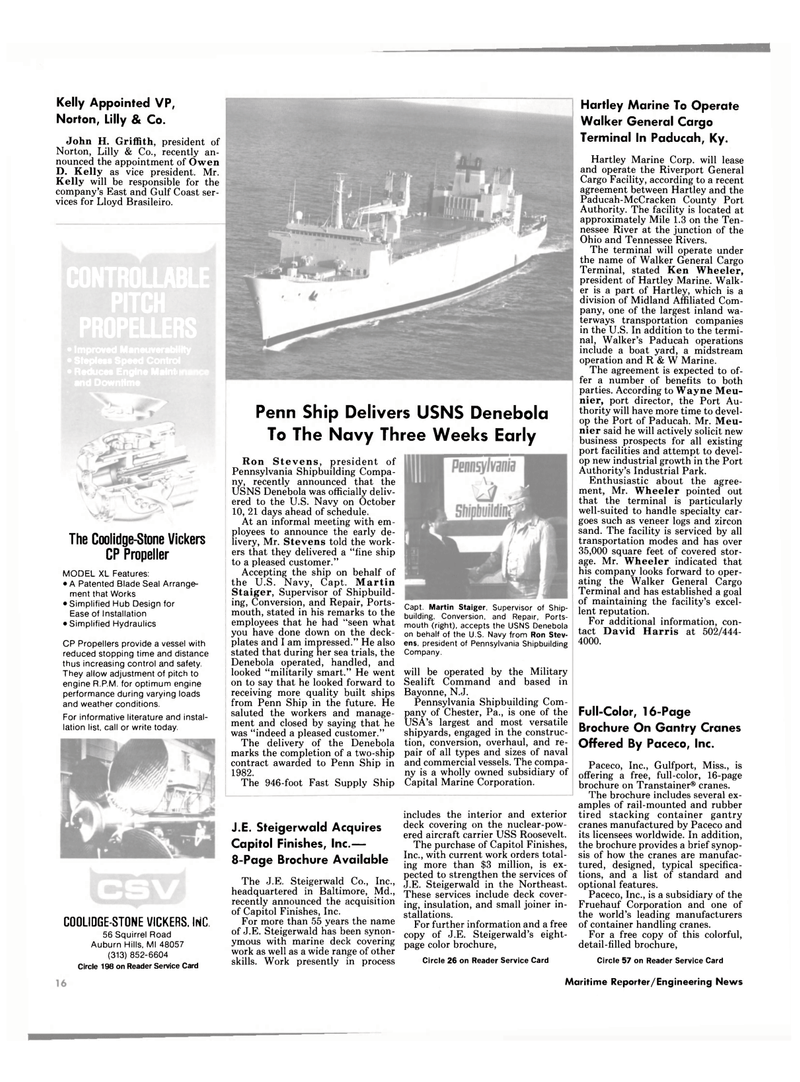 Norton, Lilly & Co., recently an- nounced the appointment of Owen

Kelly will be responsible for the company's East and Gulf Coast ser- vices for Lloyd Brasileiro.

To The Navy Three Weeks Early

USNS Denebola was officially deliv- ered to the U.S. Navy on October 10, 21 days ahead of schedule.

At an informal meeting with em- ployees to announce the early de- livery, Mr. Stevens told the work- ers that they delivered a "fine ship to a pleased customer."

Accepting the ship on behalf of the U.S. Navy, Capt. Martin

Staiger, Supervisor of Shipbuild- ing, Conversion, and Repair, Ports- mouth, stated in his remarks to the employees that he had "seen what you have done down on the deck- plates and I am impressed." He also stated that during her sea trials, the

Denebola operated, handled, and looked "militarily smart." He went on to say that he looked forward to receiving more quality built ships from Penn Ship in the future. He saluted the workers and manage- ment and closed by saying that he was "indeed a pleased customer."

The delivery of the Denebola marks the completion of a two-ship contract awarded to Penn Ship in 1982.

Company. will be operated by the Military

Sealift Command and based in

Pennsylvania Shipbuilding Com- pany of Chester, Pa., is one of the

USA's largest and most versatile shipyards, engaged in the construc- tion, conversion, overhaul, and re- pair of all types and sizes of naval and commercial vessels. The compa- ny is a wholly owned subsidiary of

For more than 55 years the name of J.E. Steigerwald has been synon- ymous with marine deck covering work as well as a wide range of other skills. Work presently in process includes the interior and exterior deck covering on the nuclear-pow- ered aircraft carrier USS Roosevelt.

The purchase of Capitol Finishes,

Inc., with current work orders total- ing more than $3 million, is ex- pected to strengthen the services of

J.E. Steigerwald in the Northeast.

These services include deck cover- ing, insulation, and small joiner in- stallations.

Hartley Marine Corp. will lease and operate the Riverport General

Cargo Facility, according to a recent agreement between Hartley and the

Authority. The facility is located at approximately Mile 1.3 on the Ten- nessee River at the junction of the

The terminal will operate under the name of Walker General Cargo

Terminal, stated Ken Wheeler, president of Hartley Marine. Walk- er is a part of Hartley, which is a division of Midland Affiliated Com- pany, one of the largest inland wa- terways transportation companies in the U.S. In addition to the termi- nal, Walker's Paducah operations include a boat yard, a midstream operation and R & W Marine.

The agreement is expected to of- fer a number of benefits to both parties. According to Wayne Meu- nier, port director, the Port Au- thority will have more time to devel- op the Port of Paducah. Mr. Meu- nier said he will actively solicit new business prospects for all existing port facilities and attempt to devel- op new industrial growth in the Port

Enthusiastic about the agree- ment, Mr. Wheeler pointed out that the terminal is particularly well-suited to handle specialty car- goes such as veneer logs and zircon sand. The facility is serviced by all transportation modes and has over 35,000 square feet of covered stor- age. Mr. Wheeler indicated that his company looks forward to oper- ating the Walker General Cargo

Terminal and has established a goal of maintaining the facility's excel- lent reputation.

The brochure includes several ex- amples of rail-mounted and rubber tired stacking container gantry cranes manufactured by Paceco and its licensees worldwide. In addition, the brochure provides a brief synop- sis of how the cranes are manufac- tured, designed, typical specifica- tions, and a list of standard and optional features.

Paceco, Inc., is a subsidiary of the

Fruehauf Corporation and one of the world's leading manufacturers of container handling cranes.

For a free copy of this colorful, detail-filled brochure,