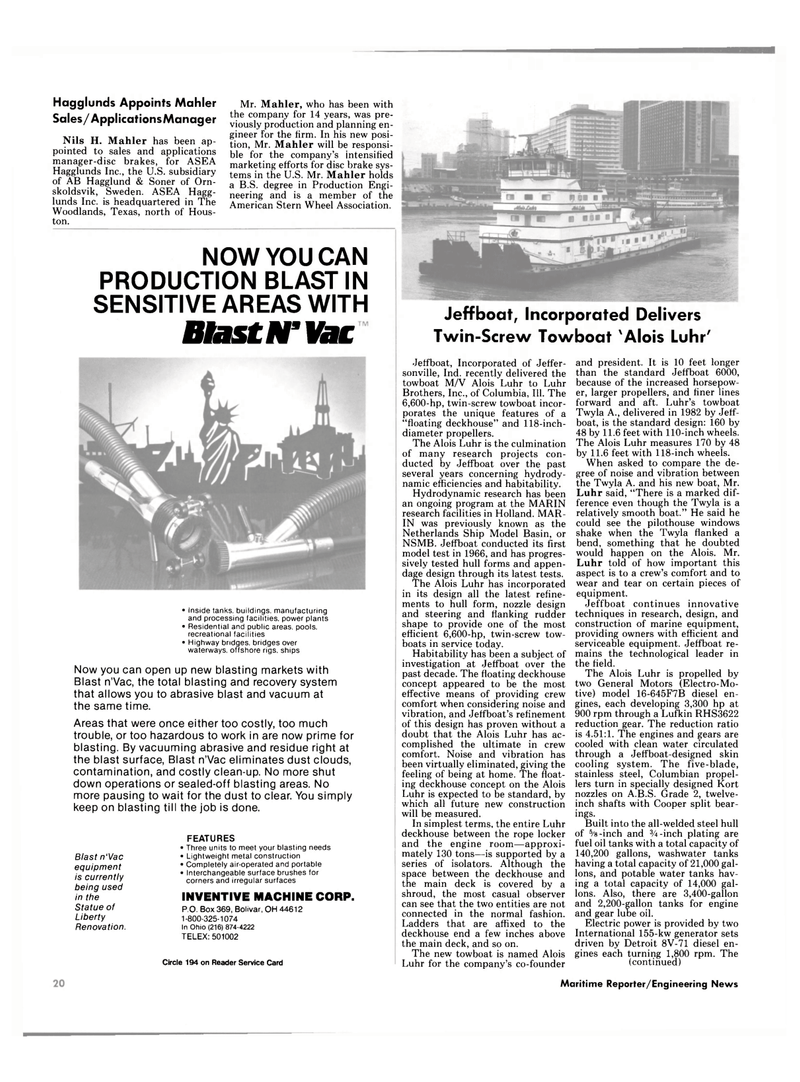 Nils H. Mahler has been ap- pointed to sales and applications manager-disc brakes, for ASEA

Mr. Mahler, who has been with the company for 14 years, was pre- viously production and planning en- gineer for the firm. In his new posi- tion, Mr. Mahler will be responsi- ble for the company's intensified marketing efforts for disc brake sys- tems in the U.S. Mr. Mahler holds a B.S. degree in Production Engi- neering and is a member of the

Now you can open up new blasting markets with

Blast n'Vac, the total blasting and recovery system that allows you to abrasive blast and vacuum at the same time.

Areas that were once either too costly, too much trouble, or too hazardous to work in are now prime for blasting. By vacuuming abrasive and residue right at the blast surface, Blast n'Vac eliminates dust clouds, contamination, and costly clean-up. No more shut down operations or sealed-off blasting areas. No more pausing to wait for the dust to clear. You simply keep on blasting till the job is done.

Blast n'Vac equipment is currently being used in the

The Alois Luhr is the culmination of many research projects con- ducted by Jeffboat over the past several years concerning hydrody- namic efficiencies and habitability.

Hydrodynamic research has been an ongoing program at the MARIN research facilities in Holland. MAR-

IN was previously known as the

NSMB. Jeffboat conducted its first model test in 1966, and has progres- sively tested hull forms and appen- dage design through its latest tests.

The Alois Luhr has incorporated in its design all the latest refine- ments to hull form, nozzle design and steering and flanking rudder shape to provide one of the most efficient 6,600-hp, twin-screw tow- boats in service today.

Habitability has been a subject of investigation at Jeffboat over the past decade. The floating deckhouse concept appeared to be the most effective means of providing crew comfort when considering noise and vibration, and Jeffboat's refinement of this design has proven without a doubt that the Alois Luhr has ac- complished the ultimate in crew comfort. Noise and vibration has been virtually eliminated, giving the feeling of being at home. The float- ing deckhouse concept on the Alois

Luhr is expected to be standard, by which all future new construction will be measured.

In simplest terms, the entire Luhr deckhouse between the rope locker and the engine room—approxi- mately 130 tons—is supported by a series of isolators. Although the space between the deckhouse and the main deck is covered by a shroud, the most casual observer can see that the two entities are not connected in the normal fashion.

Ladders that are affixed to the deckhouse end a few inches above the main deck, and so on.

The new towboat is named Alois

Luhr for the company's co-founder and president. It is 10 feet longer than the standard Jeffboat 6000, because of the increased horsepow- er, larger propellers, and finer lines forward and aft. Luhr's towboat

When asked to compare the de- gree of noise and vibration between the Twyla A. and his new boat, Mr.

Luhr said, "There is a marked dif- ference even though the Twyla is a relatively smooth boat." He said he could see the pilothouse windows shake when the Twyla flanked a bend, something that he doubted would happen on the Alois. Mr.

Luhr told of how important this aspect is to a crew's comfort and to wear and tear on certain pieces of equipment.

Jeffboat continues innovative techniques in research, design, and construction of marine equipment, providing owners with efficient and serviceable equipment. Jeffboat re- mains the technological leader in the field.

Electric power is provided by two