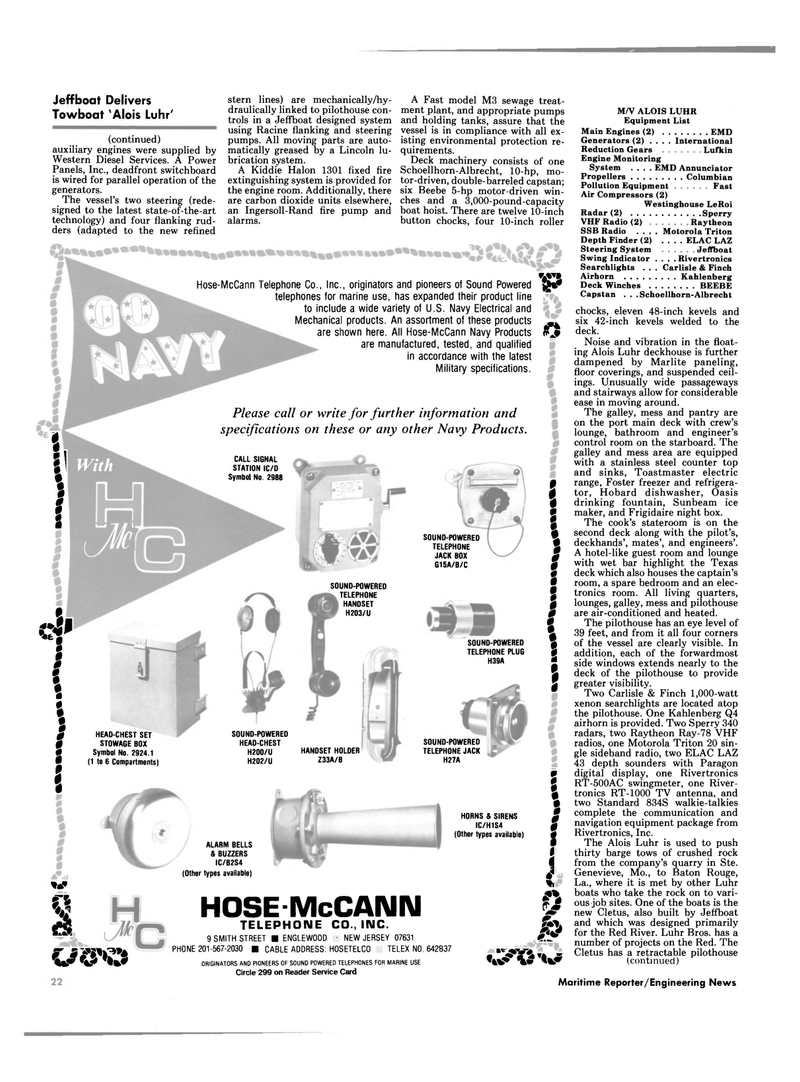 Panels, Inc., deadfront switchboard is wired for parallel operation of the generators.

A Kiddie Halon 1301 fixed fire extinguishing system is provided for the engine room. Additionally, there are carbon dioxide units elsewhere, an Ingersoll-Rand fire pump and alarms.

A Fast model M3 sewage treat- ment plant, and appropriate pumps and holding tanks, assure that the vessel is in compliance with all ex- isting environmental protection re- quirements.

Deck machinery consists of one

Hose-McCann Telephone Co., Inc., originators and pioneers of Sound Powered telephones for marine use, has expanded their product line to include a wide variety of U.S. Navy Electrical and

Mechanical products. An assortment of these products are shown here. All Hose-McCann Navy Products are manufactured, tested, and qualified in accordance with the latest

Please call or write for further information and specifications on these or any other Navy Products.

ORIGINATORS AND PIONEERS OF SOUND POWERED TELEPHONES FOR MARINE USE

The cook's stateroom is on the second deck along with the pilot's, deckhands', mates', and engineers'.

A hotel-like guest room and lounge with wet bar highlight the Texas deck which also houses the captain's room, a spare bedroom and an elec- tronics room. All living quarters, lounges, galley, mess and pilothouse are air-conditioned and heated.

The pilothouse has an eye level of 39 feet, and from it all four corners of the vessel are clearly visible. In addition, each of the forwardmost side windows extends nearly to the deck of the pilothouse to provide greater visibility.

The Alois Luhr is used to push thirty barge tows of crushed rock from the company's quarry in Ste.

La., where it is met by other Luhr boats who take the rock on to vari- ous job sites. One of the boats is the new Cletus, also built by Jeffboat and which was designed primarily for the Red River. Luhr Bros, has a number of projects on the Red. The

Cletus has a retractable pilothouse (continued)