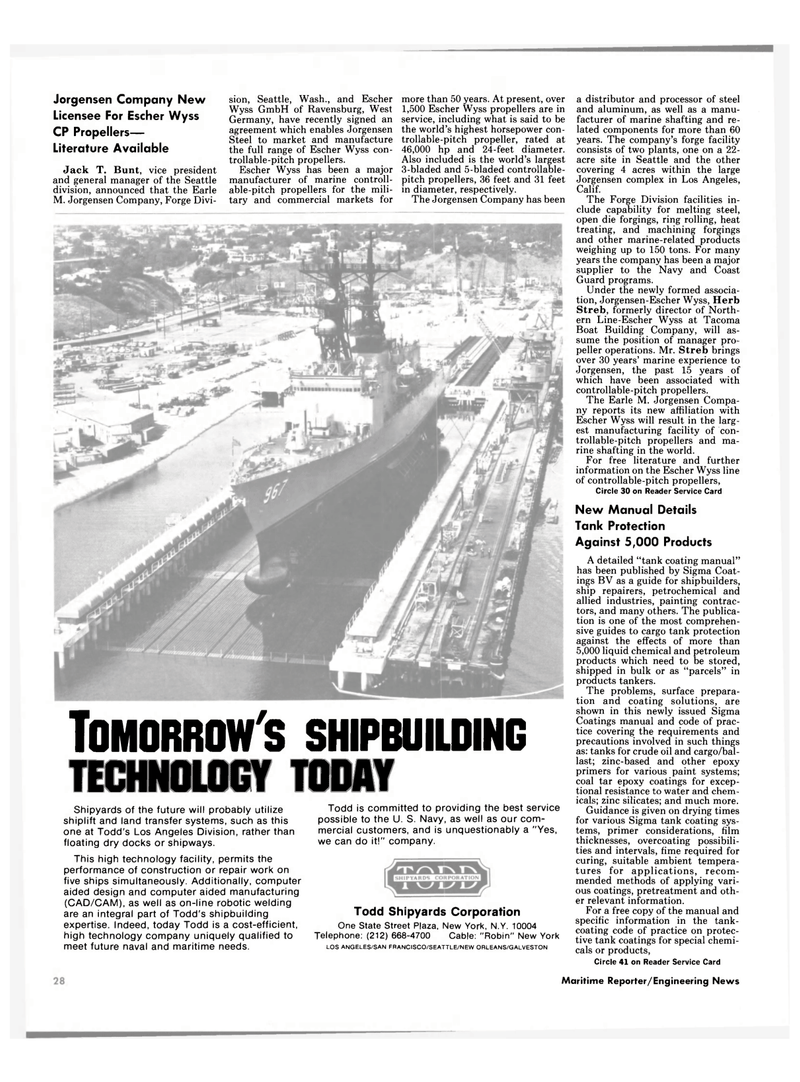 Jack T. Bunt, vice president and general manager of the Seattle division, announced that the Earle

Germany, have recently signed an agreement which enables Jorgensen

Escher Wyss has been a major manufacturer of marine controll- able-pitch propellers for the mili- tary and commercial markets for more than 50 years. At present, over 1,500 Escher Wyss propellers are in service, including what is said to be the world's highest horsepower con- trollable-pitch propeller, rated at 46,000 hp and 24-feet diameter.

The Jorgensen Company has been

Shipyards of the future will probably utilize shiplift and land transfer systems, such as this one at Todd's Los Angeles Division, rather than floating dry docks or shipways.

Todd is committed to providing the best service possible to the U. S. Navy, as well as our com- mercial customers, and is unquestionably a "Yes, we can do it!" company.

LOS ANGELES/SAN FRANCISCO/SEATTLE/NEW ORLEANS/GALVESTON a distributor and processor of steel and aluminum, as well as a manu- facturer of marine shafting and re- lated components for more than 60 years. The company's forge facility consists of two plants, one on a 22- acre site in Seattle and the other covering 4 acres within the large

The Forge Division facilities in- clude capability for melting steel, open die forgings, ring rolling, heat treating, and machining forgings and other marine-related products weighing up to 150 tons. For many years the company has been a major supplier to the Navy and Coast

Jorgensen, the past 15 years of which have been associated with controllable-pitch propellers.

Escher Wyss will result in the larg- est manufacturing facility of con- trollable-pitch propellers and ma- rine shafting in the world.

For free literature and further information on the Escher Wyss line of controllable-pitch propellers,

A detailed "tank coating manual" has been published by Sigma Coat- ings BV as a guide for shipbuilders, ship repairers, petrochemical and allied industries, painting contrac- tors, and many others. The publica- tion is one of the most comprehen- sive guides to cargo tank protection against the effects of more than 5,000 liquid chemical and petroleum products which need to be stored, shipped in bulk or as "parcels" in products tankers.

The problems, surface prepara- tion and coating solutions, are shown in this newly issued Sigma

Coatings manual and code of prac- tice covering the requirements and precautions involved in such things as: tanks for crude oil and cargo/bal- last; zinc-based and other epoxy primers for various paint systems; coal tar epoxy coatings for excep- tional resistance to water and chem- icals; zinc silicates; and much more.

For a free copy of the manual and specific information in the tank- coating code of practice on protec- tive tank coatings for special chemi- cals or products,