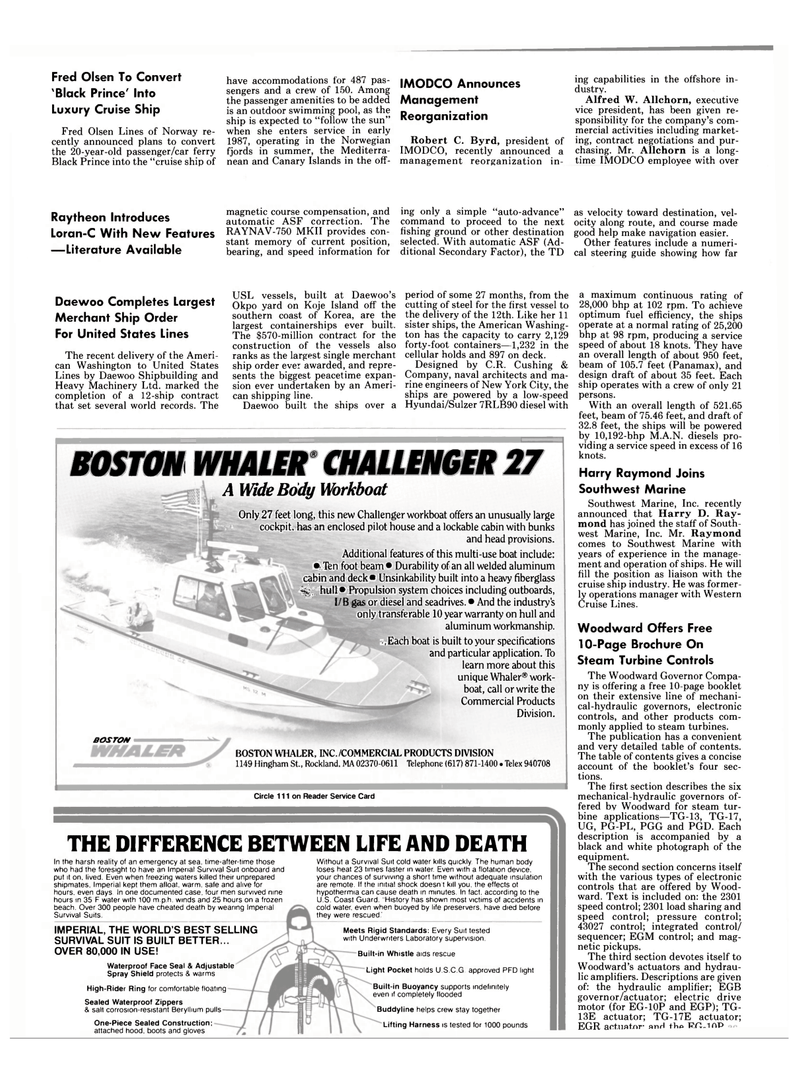 Black Prince into the "cruise ship of have accommodations for 487 pas- sengers and a crew of 150. Among the passenger amenities to be added is an outdoor swimming pool, as the ship is expected to "follow the sun" when she enters service in early 1987, operating in the Norwegian fjords in summer, the Mediterra- nean and Canary Islands in the off-

IMODCO, recently announced a management reorganization in- ing capabilities in the offshore in- dustry.

Alfred W. Allchorn, executive vice president, has been given re- sponsibility for the company's com- mercial activities including market- ing, contract negotiations and pur- chasing. Mr. Allchorn is a long- time IMODCO employee with over

RAYNAV-750 MKII provides con- stant memory of current position, bearing, and speed information for ing only a simple "auto-advance" command to proceed to the next fishing ground or other destination selected. With automatic ASF (Ad- ditional Secondary Factor), the TD as velocity toward destination, vel- ocity along route, and course made good help make navigation easier.

Other features include a numeri- cal steering guide showing how far

The recent delivery of the Ameri- can Washington to United States

Lines by Daewoo Shipbuilding and

Heavy Machinery Ltd. marked the completion of a 12-ship contract that set several world records. The

Okpo yard on Koje Island off the southern coast of Korea, are the largest containerships ever built.

The $570-million contract for the construction of the vessels also ranks as the largest single merchant ship order ever awarded, and repre- sents the biggest peacetime expan- sion ever undertaken by an Ameri- can shipping line.

Daewoo built the ships over a period of some 27 months, from the cutting of steel for the first vessel to the delivery of the 12th. Like her 11 sister ships, the American Washing- ton has the capacity to carry 2,129 forty-foot containers—1,232 in the cellular holds and 897 on deck.

Company, naval architects and ma- rine engineers of New York City, the ships are powered by a low-speed

Hyundai/Sulzer 7RLB90 diesel with a maximum continuous rating of 28,000 bhp at 102 rpm. To achieve optimum fuel efficiency, the ships operate at a normal rating of 25,200 bhp at 98 rpm, producing a service speed of about 18 knots. They have an overall length of about 950 feet, beam of 105.7 feet (Panamax), and design draft of about 35 feet. Each ship operates with a crew of only 21 persons.

Southwest Marine, Inc. recently announced that Harry D. Ray- mond has joined the staff of South- west Marine, Inc. Mr. Raymond comes to Southwest Marine with years of experience in the manage- ment and operation of ships. He will fill the position as liaison with the cruise ship industry. He was former- ly operations manager with Western

The Woodward Governor Compa- ny is offering a free 10-page booklet on their extensive line of mechani- cal-hydraulic governors, electronic controls, and other products com- monly applied to steam turbines.

The publication has a convenient and very detailed table of contents.

The table of contents gives a concise account of the booklet's four sec- tions.

UG, PG-PL, PGG and PGD. Each description is accompanied by a black and white photograph of the equipment.

The second section concerns itself with the various types of electronic controls that are offered by Wood- ward. Text is included on: the 2301 speed control; 2301 load sharing and speed control; pressure control; 43027 control; integrated control/ sequencer; EGM control; and mag- netic pickups.

The third section devotes itself to

THE DIFFERENCE BETWEEN LIFE AND DEATH

In the harsh reality of an emergency at sea, time-after-time those who had the foresight to have an Imperial Survival Suit onboard and put it on, lived. Even when freezing waters killed their unprepared shipmates, Imperial kept them afloat, warm, safe and alive for hours, even days. In one documented case, four men survived nine hours in 35 F water with 100 m.p.h. winds and 25 hours on a frozen beach. Over 300 people have cheated death by wearing Imperial

Without a Survival Suit cold water kills quickly The human body loses heat 23 times faster in water. Even with a flotation device, your chances of surviving a short time without adequate insulation are remote. If the initial shock doesn t kill you, the effects ot hypothermia can cause death in minutes In fact, according to the

U.S. Coast Guard. History has shown most victims of accidents in cold water, even when buoyed by life preservers, have died before they were rescued.'

Lifting Harness is tested for 1000 pounds

Only 27 feet long, this new Challenger workboat offers an unusually large cockpit, has an enclosed pilot house and a lockable cabin with bunks and head provisions.

Additional features of this multi-use boat include: • Ten foot beam • Durability of an all welded aluminum cabin and deck® Unsinkability built into a heavy fiberglass fgj. hull• Propulsion system choices including outboards, ; or diesel and seadrives. • And the industry's only transferable 10 year warranty on hull and aluminum workmanship. >,Each boat is built to your specifications and particular application. To learn more about this unique Whaler® work- boat, call or write the