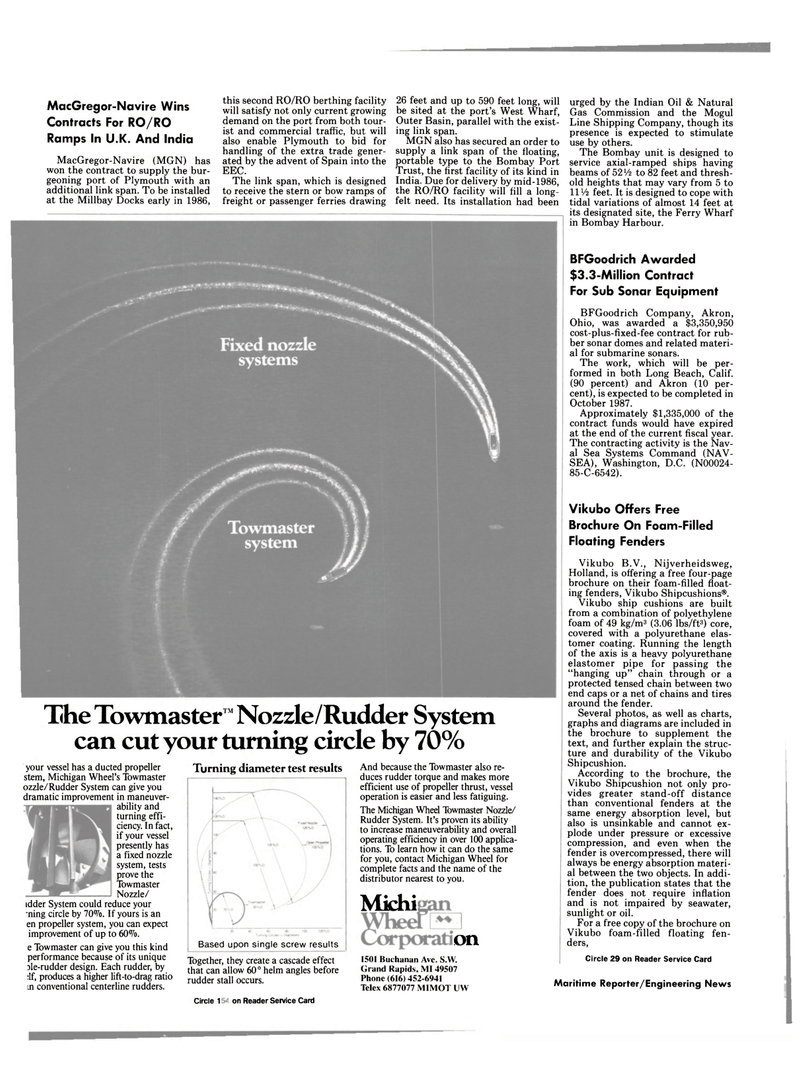 Ramps In U.K. And India

MacGregor-Navire (MGN) has won the contract to supply the bur- geoning port of Plymouth with an additional link span. To be installed at the Millbay Docks early in 1986, this second RO/RO berthing facility will satisfy not only current growing demand on the port from both tour- ist and commercial traffic, but will also enable Plymouth to bid for handling of the extra trade gener- ated by the advent of Spain into the

The link span, which is designed to receive the stern or bow ramps of freight or passenger ferries drawing 26 feet and up to 590 feet long, will be sited at the port's West Wharf,

MGN also has secured an order to supply a link span of the floating, portable type to the Bombay Port

Trust, the first facility of its kind in

India. Due for delivery by mid-1986, the RO/RO facility will fill a long- felt need. Its installation had been

Nozzle/ idder System could reduce your -ning circle by 70°7o. If yours is an en propeller system, you can expect improvement of up to 60%. e Towmaster can give you this kind performance because of its unique

Based upon single screw results

And because the Towmaster also re- duces rudder torque and makes more efficient use of propeller thrust, vessel operation is easier and less fatiguing.

Rudder System. It's proven its ability to increase maneuverability and overall operating efficiency in over 100 applica- tions. To learn how it can do the same for you, contact Michigan Wheel for complete facts and the name of the distributor nearest to you.

Together, they create a cascade effect that can allow 60° helm angles before rudder stall occurs. 1501 Buchanan Ave. S.W.

Gas Commission and the Mogul

Line Shipping Company, though its presence is expected to stimulate use by others.

The Bombay unit is designed to service axial-ramped ships having beams of 52 Vi to 82 feet and thresh- old heights that may vary from 5 to 11V2 feet. It is designed to cope with tidal variations of almost 14 feet at its designated site, the Ferry Wharf in Bombay Harbour.

The work, which will be per- formed in both Long Beach, Calif. (90 percent) and Akron (10 per- cent), is expected to be completed in

Approximately $1,335,000 of the contract funds would have expired at the end of the current fiscal year.

Vikubo ship cushions are built from a combination of polyethylene foam of 49 kg/m3 (3.06 lbs/ft3) core, covered with a polyurethane elas- tomer coating. Running the length of the axis is a heavy polyurethane elastomer pipe for passing the "hanging up" chain through or a protected tensed chain between two end caps or a net of chains and tires around the fender.

Several photos, as well as charts, graphs and diagrams are included in the brochure to supplement the text, and further explain the struc- ture and durability of the Vikubo

According to the brochure, the

Vikubo Shipcushion not only pro- vides greater stand-off distance than conventional fenders at the same energy absorption level, but also is unsinkable and cannot ex- plode under pressure or excessive compression, and even when the fender is overcompressed, there will always be energy absorption materi- al between the two objects. In addi- tion, the publication states that the fender does not require inflation and is not impaired by seawater, sunlight or oil.

For a free copy of the brochure on