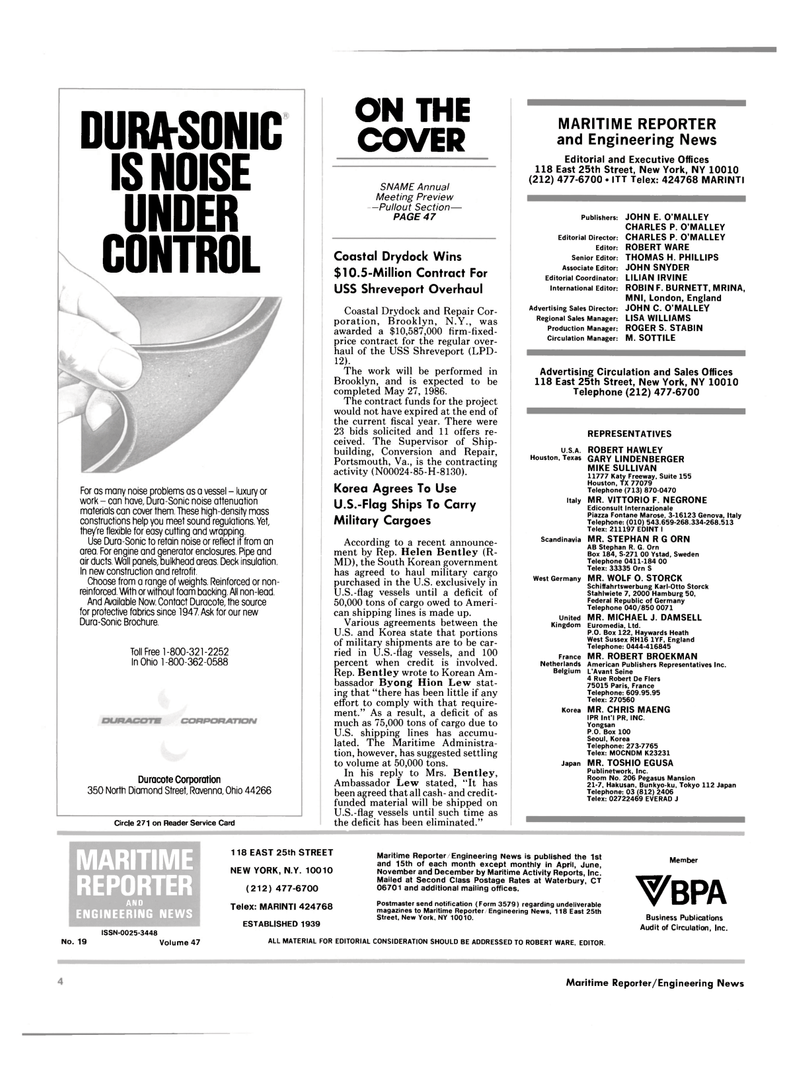 For as many noise problems as a vessel - luxury or work - can have, Dura-Sonic noise attenuation materials can cover them. These high-density mass constructions help you meet sound regulations. Yet, they're flexible for easy cutting and wrapping.

Use Dura-Sonic to retain noise or reflect it from an area. For engine and generator enclosures. Pipe and air ducts. Wall panels, bulkhead areas. Deck insulation.

In new construction and retrofit.

Choose from a range of weights. Reinforced or non- reinforced. With or without foam backing. All non-lead.

And Available Now. Contact Duracote, the source for protective fabrics since 1947. Ask for our new

Coastal Drydock and Repair Cor- poration, Brooklyn, N.Y., was awarded a $10,587,000 firm-fixed- price contract for the regular over- haul of the USS Shreveport (LPD- 12).

The contract funds for the project would not have expired at the end of the current fiscal year. There were 23 bids solicited and 11 offers re- ceived. The Supervisor of Ship- building, Conversion and Repair,

Korea Agrees To Use

According to a recent announce- ment by Rep. Helen Bentley (R-

MD), the South Korean government has agreed to haul military cargo purchased in the U.S. exclusively in

U.S.-flag vessels until a deficit of 50,000 tons of cargo owed to Ameri- can shipping lines is made up.

Various agreements between the

U.S. and Korea state that portions of military shipments are to be car- ried in U.S.-flag vessels, and 100 percent when credit is involved.

Rep. Bentley wrote to Korean Am- bassador Byong Hion Lew stat- ing that "there has been little if any effort to comply with that require- ment." As a result, a deficit of as much as 75,000 tons of cargo due to

U.S. shipping lines has accumu- lated. The Maritime Administra- tion, however, has suggested settling to volume at 50,000 tons.

In his reply to Mrs. Bentley,

Ambassador Lew stated, "It has been agreed that all cash- and credit- funded material will be shipped on

U.S.-flag vessels until such time as the deficit has been eliminated."

Maritime Reporter/Engineering News is published the 1st and 15th of each month except monthly in April, June,

No. 19 Volume 47 ALL MATERIAL FOR EDITORIAL CONSIDERATION SHOULD BE ADDRESSED TO ROBERT WARE, EDITOR.