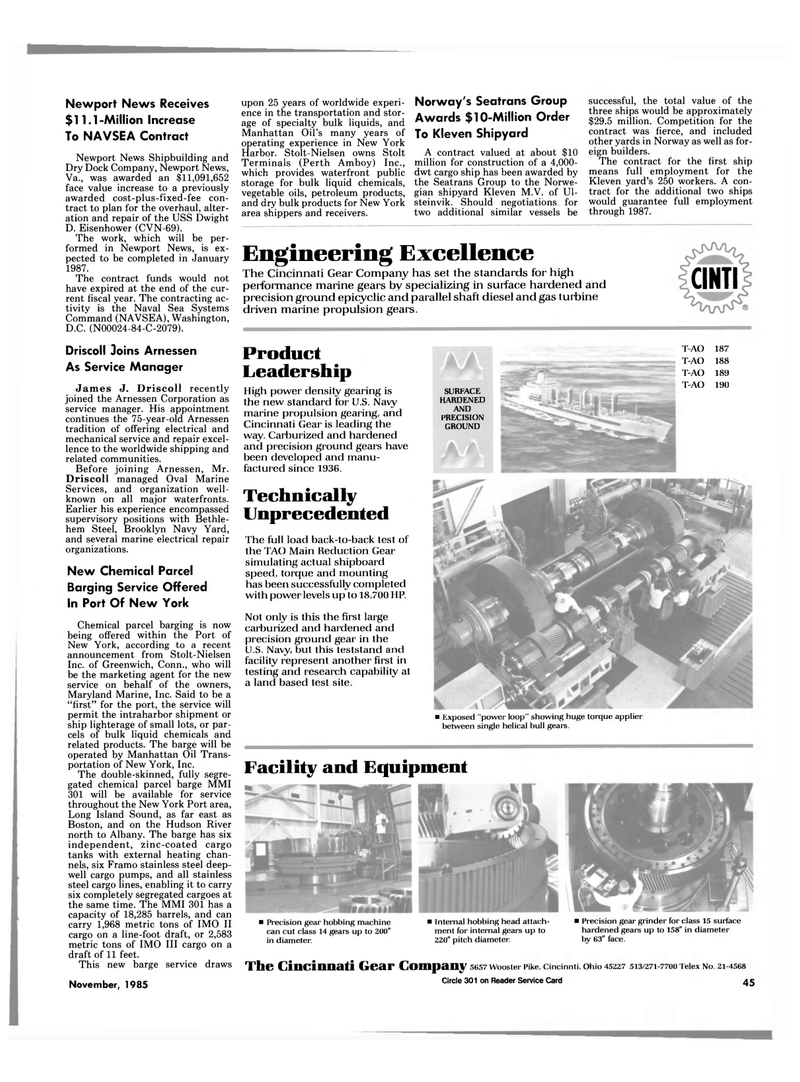 Va., was awarded an $11,091,652 face value increase to a previously awarded cost-plus-fixed-fee con- tract to plan for the overhaul, alter- ation and repair of the USS Dwight

The work, which will be per- formed in Newport News, is ex- pected to be completed in January 1987.

The contract funds would not have expired at the end of the cur- rent fiscal year. The contracting ac- tivity is the Naval Sea Systems

Services, and organization well- known on all major waterfronts.

In Port Of New York

Chemical parcel barging is now being offered within the Port of

New York, according to a recent announcement from Stolt-Nielsen

Inc. of Greenwich, Conn., who will be the marketing agent for the new service on behalf of the owners,

Maryland Marine, Inc. Said to be a "first" for the port, the service will permit the intraharbor shipment or ship lighterage of small lots, or par- cels of bulk liquid chemicals and related products. The barge will be operated by Manhattan Oil Trans- portation of New York, Inc.

The double-skinned, fully segre- gated chemical parcel barge MMI 301 will be available for service throughout the New York Port area,

Boston, and on the Hudson River north to Albany. The barge has six independent, zinc-coated cargo tanks with external heating chan- nels, six Framo stainless steel deep- well cargo pumps, and all stainless steel cargo lines, enabling it to carry six completely segregated cargoes at the same time. The MMI 301 has a capacity of 18,285 barrels, and can carry 1,968 metric tons of IMO II cargo on a line-foot draft, or 2,583 metric tons of IMO III cargo on a draft of 11 feet.

November, 1985 41 upon 25 years of worldwide experi- ence in the transportation and stor- age of specialty bulk liquids, and

Manhattan Oil's many years of operating experience in New York

A contract valued at about $10 million for construction of a 4,000- dwt cargo ship has been awarded by the Seatrans Group to the Norwe- gian shipyard Kleven M.V. of Ul- steinvik. Should negotiations for two additional similar vessels be successful, the total value of the three ships would be approximately $29.5 million. Competition for the contract was fierce, and included other yards in Norway as well as for- eign builders.

The contract for the first ship means full employment for the

Kleven yard's 250 workers. A con- tract for the additional two ships would guarantee full employment through 1987.

Cincinnati Gear is leading the way. Carburized and hardened and precision ground gears have been developed and manu- factured since 1936.

The full load back-to-back test of the TAO Main Reduction Gear simulating actual shipboard speed, torque and mounting has been successfully completed with power levels up to 18,700 HP.

U.S. Navy, but this teststand and facility represent another first in testing and research capability at a land based test site.