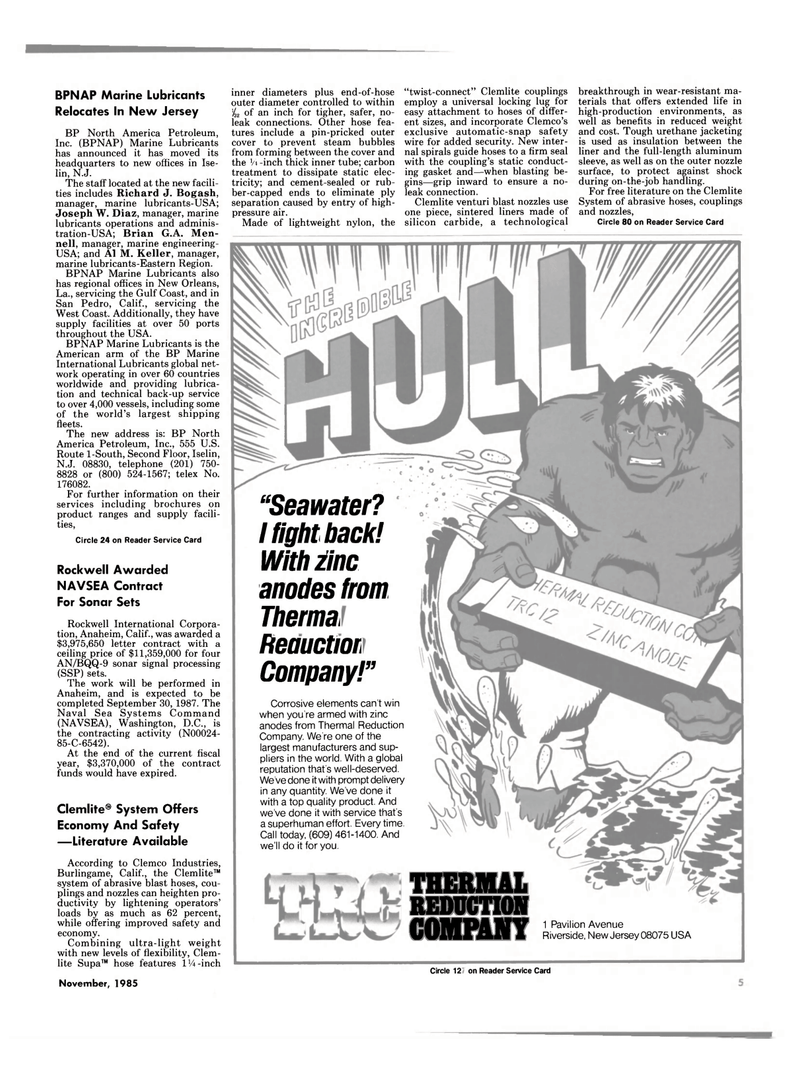 Inc. (BPNAP) Marine Lubricants has announced it has moved its headquarters to new offices in Ise- lin, N.J.

La., servicing the Gulf Coast, and in

West Coast. Additionally, they have supply facilities at over 50 ports throughout the USA.

BPNAP Marine Lubricants is the

American arm of the BP Marine

International Lubricants global net- work operating in over 60 countries worldwide and providing lubrica- tion and technical back-up service to over 4,000 vessels, including some of the world's largest shipping fleets.

The new address is: BP North

For further information on their services including brochures on product ranges and supply facili- ties,

Anaheim, and is expected to be completed September 30, 1987. The

At the end of the current fiscal year, $3,370,000 of the contract funds would have expired.

According to Clemco Industries,

Burlingame, Calif., the Clemlite™ system of abrasive blast hoses, cou- plings and nozzles can heighten pro- ductivity by lightening operators' loads by as much as 62 percent, while offering improved safety and economy.

November, 1985 1 1 1 inner diameters plus end-of-hose outer diameter controlled to within '4 of an inch for tigher, safer, no- leak connections. Other hose fea- tures include a pin-pricked outer cover to prevent steam bubbles from forming between the cover and the Vt -inch thick inner tube; carbon treatment to dissipate static elec- tricity; and cement-sealed or rub- ber-capped ends to eliminate ply separation caused by entry of high- pressure air.

Clemlite venturi blast nozzles use one piece, sintered liners made of silicon carbide, a technological breakthrough in wear-resistant ma- terials that offers extended life in high-production environments, as well as benefits in reduced weight and cost. Tough urethane jacketing is used as insulation between the liner and the full-length aluminum sleeve, as well as on the outer nozzle surface, to protect against shock during on-the-job handling.

For free literature on the Clemlite

With zinc anodes from

Company. We're one of the largest manufacturers and sup- pliers in the world. With a global reputation that's well-deserved.