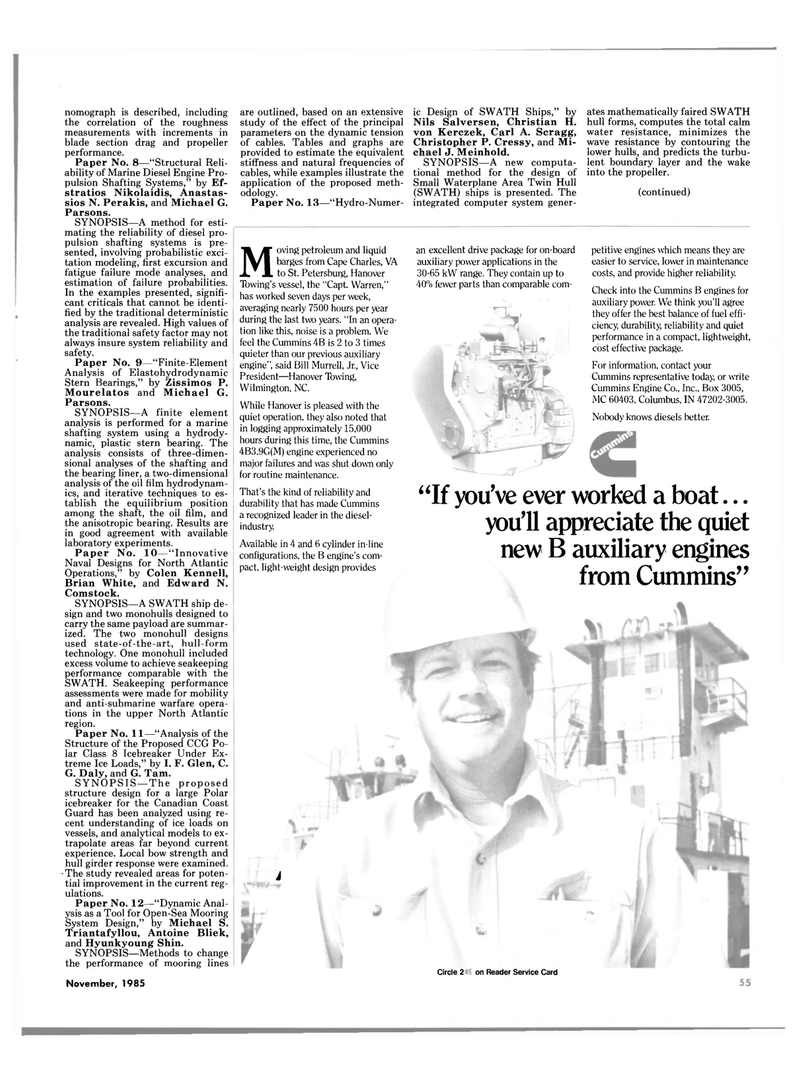 are outlined, based on an extensive study of the effect of the principal parameters on the dynamic tension of cables. Tables and graphs are provided to estimate the equivalent stiffness and natural frequencies of cables, while examples illustrate the application of the proposed meth- odology.

Small Waterplane Area Twin Hull (SWATH) ships is presented. The integrated computer system gener- nomograph is described, including the correlation of the roughness measurements with increments in blade section drag and propeller performance.

In the examples presented, signifi- cant criticals that cannot be identi- fied by the traditional deterministic analysis are revealed. High values of the traditional safety factor may not always insure system reliability and safety.

SYNOPSIS—A finite element analysis is performed for a marine shafting system using a hydrody- namic, plastic stern bearing. The analysis consists of three-dimen- sional analyses of the shafting and the bearing liner, a two-dimensional analysis of the oil film hydrodynam- ics, and iterative techniques to es- tablish the equilibrium position among the shaft, the oil film, and the anisotropic bearing. Results are in good agreement with available laboratory experiments.

SWATH. Seakeeping performance assessments were made for mobility and anti-submarine warfare opera- tions in the upper North Atlantic region.

Guard has been analyzed using re- cent understanding of ice loads on vessels, and analytical models to ex- trapolate areas far beyond current experience. Local bow strength and hull girder response were examined. • The study revealed areas for poten- tial improvement in the current reg- ulations.

SYNOPSIS—Methods to change the performance of mooring lines

Towing's vessel, the "Capt. Warren," has worked seven days per week, averaging nearly 7500 hours per year during the last two years. "In an opera- tion like this, noise is a problem. We feel the Cummins 4B is 2 to 3 times quieter than our previous auxiliary engine", said Bill Murrell, Jr., Vice

While Hanover is pleased with the quiet operation, they also noted that in logging approximately 15,000 hours during this time, the Cummins 4B3.9G(M) engine experienced no major failures and was shut down only for routine maintenance. an excellent drive package for on-board auxiliary power applications in the 30-65 kW range. They contain up to 40"o fewer parts than comparable com- ates mathematically faired SWATH hull forms, computes the total calm water resistance, minimizes the wave resistance by contouring the lower hulls, and predicts the turbu- lent boundary layer and the wake into the propeller. (continued) petitive engines which means they are easier to service, lower in maintenance costs, and provide higher reliability.

Check into the Cummins B engines for auxiliary power. We think you'll agree they offer the best balance of fuel effi- ciency, durability, reliability and quiet performance in a compact, lightweight, cost effective package.

That's the kind of reliability and durability that has made Cummins a recognized leader in the diesel- industry.

Available in 4 and 6 cylinder in-line configurations, the B engine's com- pact, light-weight design provides "If you've ever worked a boat... you'll appreciate the quiet new B auxiliary engines from Cummins" j