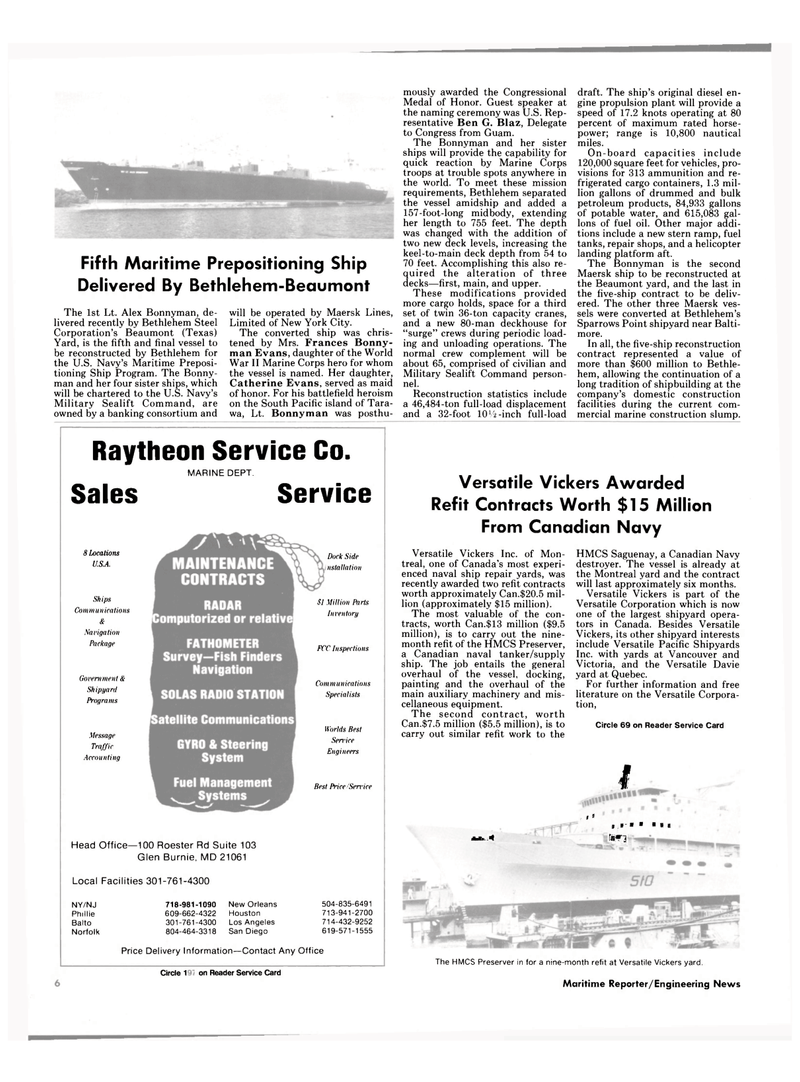 Yard, is the fifth and final vessel to be reconstructed by Bethlehem for the U.S. Navy's Maritime Preposi- tioning Ship Program. The Bonny- man and her four sister ships, which will be chartered to the U.S. Navy's

Military Sealift Command, are owned by a banking consortium and will be operated by Maersk Lines,

The converted ship was chris- tened by Mrs. Frances Bonny- man Evans, daughter of the World

War II Marine Corps hero for whom the vessel is named. Her daughter,

Catherine Evans, served as maid of honor. For his battlefield heroism on the South Pacific island of Tara- wa, Lt. Bonnyman was posthu- mously awarded the Congressional

The Bonnyman and her sister ships will provide the capability for quick reaction by Marine Corps troops at trouble spots anywhere in the world. To meet these mission requirements, Bethlehem separated the vessel amidship and added a 157-foot-long midbody, extending her length to 755 feet. The depth was changed with the addition of two new deck levels, increasing the keel-to-main deck depth from 54 to 70 feet. Accomplishing this also re- quired the alteration of three decks—first, main, and upper.

These modifications provided more cargo holds, space for a third set of twin 36-ton capacity cranes, and a new 80-man deckhouse for "surge" crews during periodic load- ing and unloading operations. The normal crew complement will be about 65, comprised of civilian and

The Bonnyman is the second

Maersk ship to be reconstructed at the Beaumont yard, and the last in the five-ship contract to be deliv- ered. The other three Maersk ves- sels were converted at Bethlehem's

In all, the five-ship reconstruction contract represented a value of more than $600 million to Bethle- hem, allowing the continuation of a long tradition of shipbuilding at the company's domestic construction facilities during the current com- mercial marine construction slump.

The most valuable of the con- tracts, worth Can.$13 million ($9.5 million), is to carry out the nine- month refit of the HMCS Preserver, a Canadian naval tanker/supply ship. The job entails the general overhaul of the vessel, docking, painting and the overhaul of the main auxiliary machinery and mis- cellaneous equipment.

The second contract, worth

HMCS Saguenay, a Canadian Navy destroyer. The vessel is already at the Montreal yard and the contract will last approximately six months.

Versatile Vickers is part of the

Versatile Corporation which is now one of the largest shipyard opera- tors in Canada. Besides Versatile

Vickers, its other shipyard interests include Versatile Pacific Shipyards

Inc. with yards at Vancouver and

Victoria, and the Versatile Davie yard at Quebec.

For further information and free literature on the Versatile Corpora- tion,

The HMCS Preserver in for a nine-month refit at Versatile Vickers yard. 6 Maritime Reporter/Engineering News