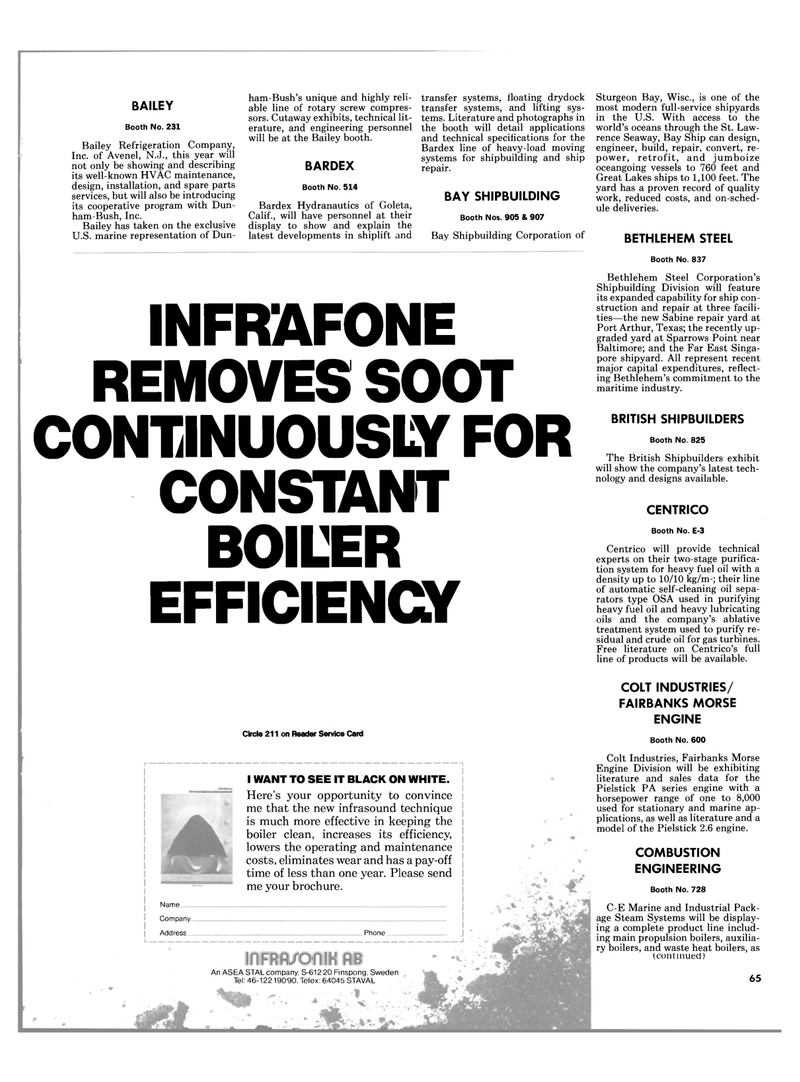 Inc. of Avenel, N.J., this year will not only be showing and describing its well-known HVAC maintenance, design, installation, and spare parts services, but will also be introducing its cooperative program with Dun- ham-Bush, Inc.

Bailey has taken on the exclusive

Calif., will have personnel at their display to show and explain the latest developments in shiplift and transfer systems, floating drydock transfer systems, and lifting sys- tems. Literature and photographs in the booth will detail applications and technical specifications for the

I WANT TO SEE IT BLACK ON WHITE.

Here's your opportunity to convince me that the new infrasound technique is much more effective in keeping the boiler clean, increases its efficiency, lowers the operating and maintenance costs, eliminates wear and has a pay-off time of less than one year. Please send me your brochure.

Sturgeon Bay, Wise., is one of the most modern full-service shipyards in the U.S. With access to the world's oceans through the St. Law- rence Seaway, Bay Ship can design, engineer, build, repair, convert, re- power, retrofit, and jumboize oceangoing vessels to 760 feet and

Great Lakes ships to 1,100 feet. The yard has a proven record of quality work, reduced costs, and on-sched- ule deliveries.

Port Arthur, Texas; the recently up- graded yard at Sparrows Point near

Centrico will provide technical experts on their two-stage purifica- tion system for heavy fuel oil with a density up to 10/10 kg/m-; their line of automatic self-cleaning oil sepa- rators type OSA used in purifying heavy fuel oil and heavy lubricating oils and the company's ablative treatment system used to purify re- sidual and crude oil for gas turbines.

Free literature on Centrico's full line of products will be available.

Engine Division will be exhibiting literature and sales data for the

Pielstick PA series engine with a horsepower range of one to 8,000 used for stationary and marine ap- plications, as well as literature and a model of the Pielstick 2.6 engine.