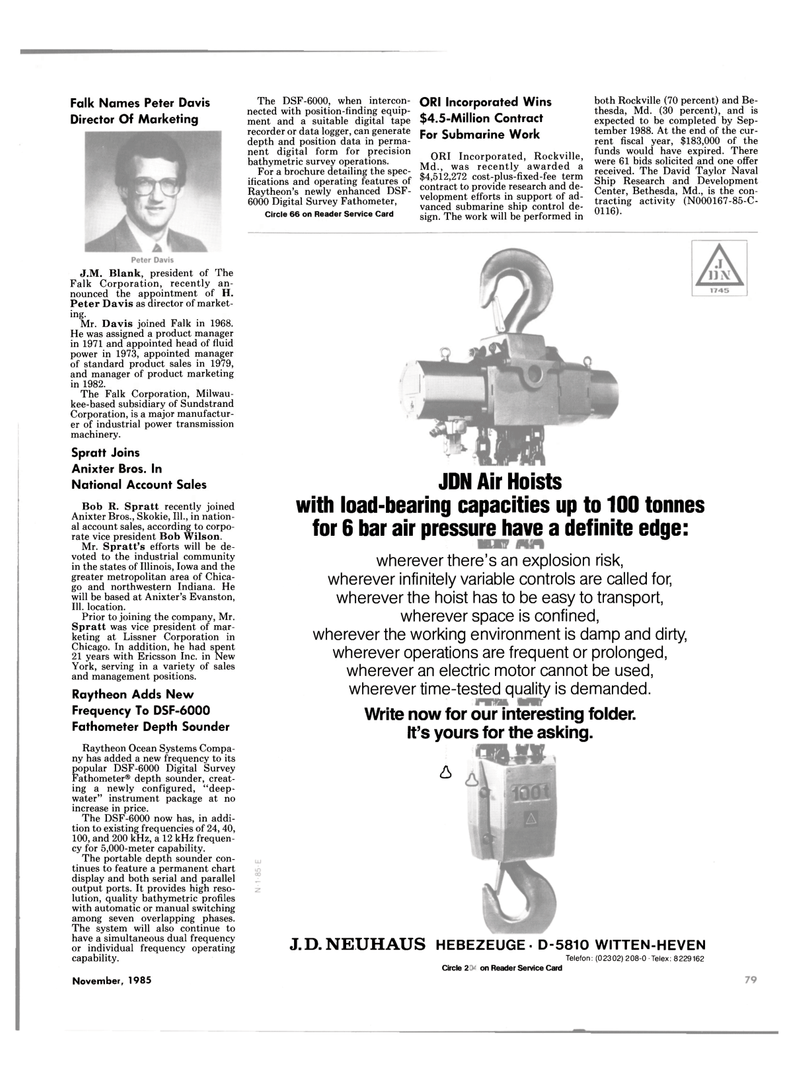 For a brochure detailing the spec- ifications and operating features of

Md., was recently awarded a $4,512,272 cost-plus-fixed-fee term contract to provide research and de- velopment efforts in support of ad- vanced submarine ship control de- sign. The work will be performed in both Rockville (70 percent) and Be- thesda, Md. (30 percent), and is expected to be completed by Sep- tember 1988. At the end of the cur- rent fiscal year, $183,000 of the funds would have expired. There were 61 bids solicited and one offer received. The David Taylor Naval

J.M. Blank, president of The

Falk Corporation, recently an- nounced the appointment of H.

He was assigned a product manager in 1971 and appointed head of fluid power in 1973, appointed manager of standard product sales in 1979, and manager of product marketing in 1982.

Mr. Spratt's efforts will be de- voted to the industrial community in the states of Illinois, Iowa and the greater metropolitan area of Chica- go and northwestern Indiana. He will be based at Anixter's Evanston, 111. location.

Prior to joining the company, Mr.

Spratt was vice president of mar- keting at Lissner Corporation in

Chicago. In addition, he had spent 21 years with Ericsson Inc. in New

York, serving in a variety of sales and management positions.

JDN Air Hoists with load-bearing capacities up to 100 tonnes for 6 bar air pressure have a definite edge: wherever there's an explosion risk, wherever infinitely variable controls are called for, wherever the hoist has to be easy to transport, wherever space is confined, wherever the working environment is damp and dirty, wherever operations are frequent or prolonged, wherever an electric motor cannot be used, wherever time-tested quality is demanded.

Write now for our interesting folder.

It's yours for the asking.