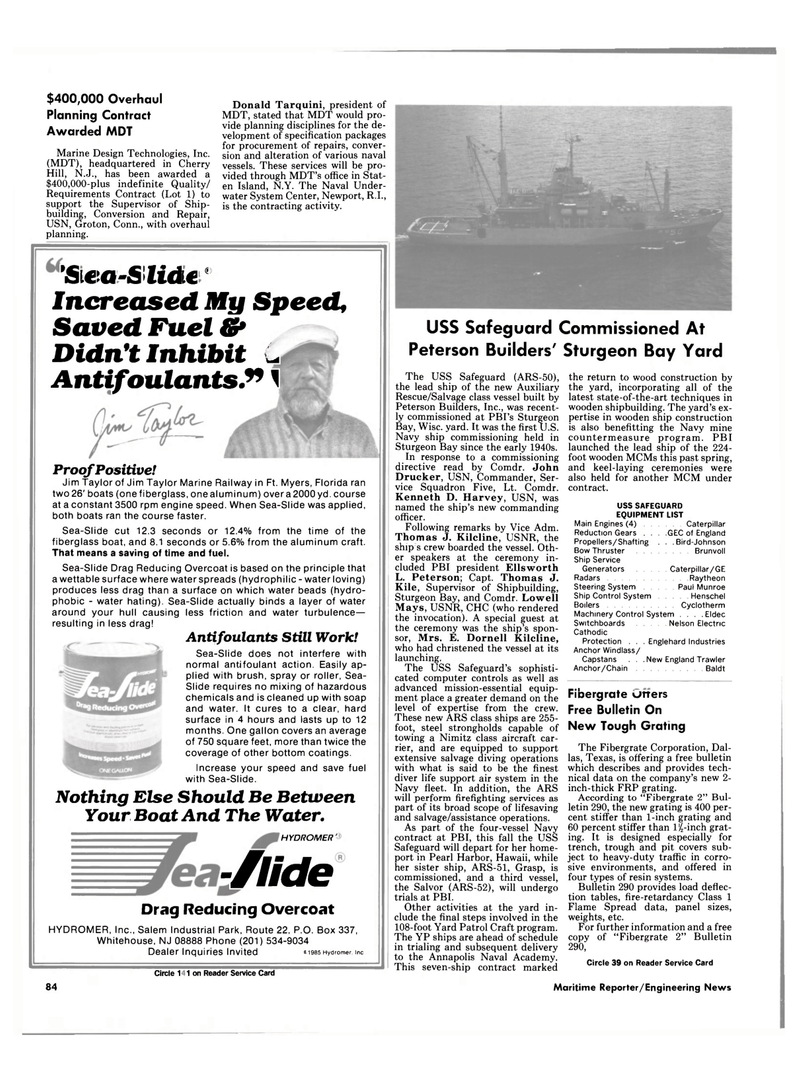 Requirements Contract (Lot 1) to support the Supervisor of Ship- building, Conversion and Repair,

MDT, stated that MDT would pro- vide planning disciplines for the de- velopment of specification packages for procurement of repairs, conver- sion and alteration of various naval vessels. These services will be pro- vided through MDT's office in Stat- en Island, N.Y. The Naval Under- water System Center, Newport, R.I., is the contracting activity.

Jim Taylor of Jim Taylor Marine Railway in Ft. Myers, Florida ran two 26' boats (one fiberglass, one aluminum) over a 2000 yd. course at a constant 3500 rpm engine speed. When Sea-Slide was applied, both boats ran the course faster.

That means a saving of time and fuel.

Sea-Slide Drag Reducing Overcoat is based on the principle that a wettable surface where water spreads (hydrophilic - water loving) produces less drag than a surface on which water beads (hydro- phobic - water hating). Sea-Slide actually binds a layer of water around your hull causing less friction and water turbulence— resulting in less drag!

Slide requires no mixing of hazardous chemicals and is cleaned up with soap and water. It cures to a clear, hard surface in 4 hours and lasts up to 12 months. One gallon covers an average of 750 square feet, more than twice the coverage of other bottom coatings.

Increase your speed and save fuel with Sea-Slide.

Nothing Else Should Be Between

Your Boat And The Water.

The USS Safeguard (ARS-50), the return to wood construction by the lead ship of the new Auxiliary the yard, incorporating all of the

Bay, Wise. yard. It was the first U.S. is also benefitting the Navy mine

Sturgeon Bay since the early 1940s, launched the lead ship of the 224-

In response to a commissioning foot wooden MCMs this past spring, directive read by Comdr. John and keel-laying ceremonies were

These new ARS class ships are 255- foot, steel strongholds capable of New Tough Grating towing a Nimitz class aircraft car- rier, and are equipped to support The Fibergrate Corporation, Dal- extensive salvage diving operations las, Texas, is offering a free bulletin with what is said to be the finest which describes and provides tech- diver life support air system in the nical data on the company's new 2-

Navy fleet. In addition, the ARS inch-thick FRP grating, will perform firefighting services as According to "Fibergrate 2" Bul- part of its broad scope of lifesaving letin 290, the new grating is 400 per- and salvage/assistance operations. cent stiffer than 1-inch grating and

As part of the four-vessel Navy 60 percent stiffer than ll(-inch grat- contract at PBI, this fall the USS ing. It is designed especially for

Other activities at the yard in- Flame Spread data, panel sizes, elude the final steps involved in the weights, etc. 108-foot Yard Patrol Craft program. For further information and a free