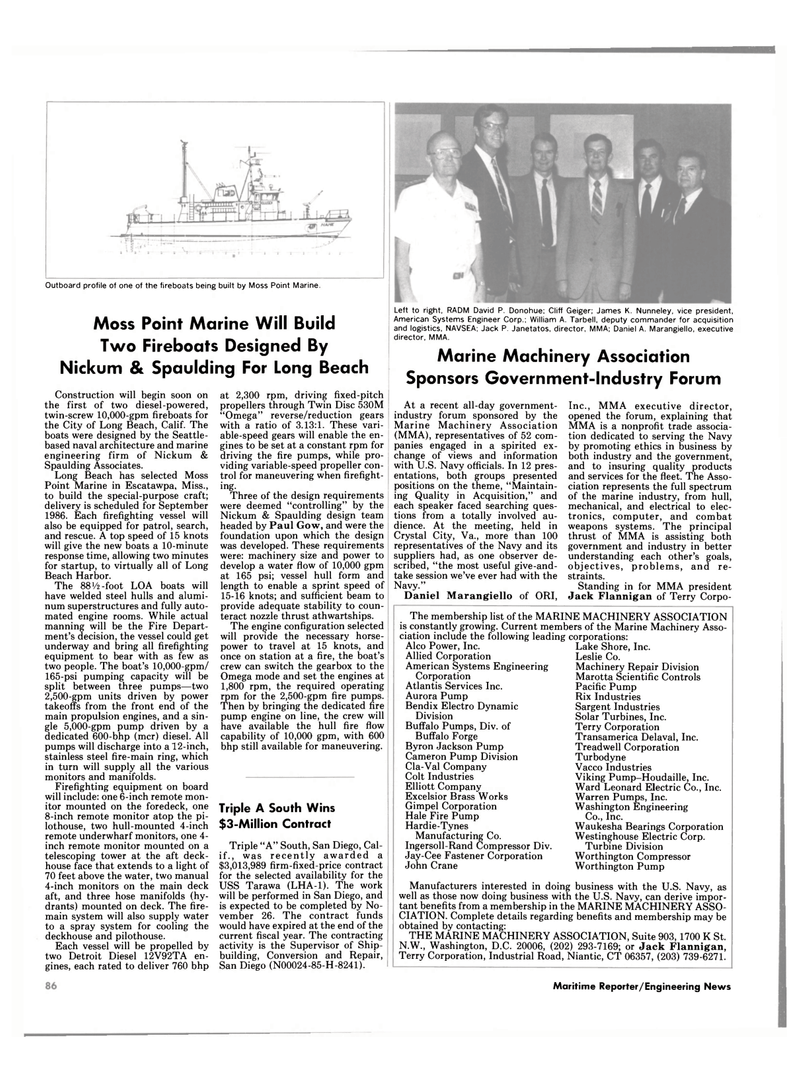 Outboard profile of one of the fireboats being built by Moss Point Marine.

Construction will begin soon on the first of two diesel-powered, twin-screw 10,000-gpm fireboats for the City of Long Beach, Calif. The boats were designed by the Seattle- based naval architecture and marine engineering firm of Nickum &

Point Marine in Escatawpa, Miss., to build the special-purpose craft; delivery is scheduled for September 1986. Each firefighting vessel will also be equipped for patrol, search, and rescue. A top speed of 15 knots will give the new boats a 10-minute response time, allowing two minutes for startup, to virtually all of Long

The 88 V2-foot LOA boats will have welded steel hulls and alumi- num superstructures and fully auto- mated engine rooms. While actual manning will be the Fire Depart- ment's decision, the vessel could get underway and bring all firefighting equipment to bear with as few as two people. The boat's 10,000-gpm/ 165-psi pumping capacity will be split between three pumps—two 2,500-gpm units driven by power takeoffs from the front end of the main propulsion engines, and a sin- gle 5,000-gpm pump driven by a dedicated 600-bhp (mcr) diesel. All pumps will discharge into a 12-inch, stainless steel fire-main ring, which in turn will supply all the various monitors and manifolds.

Firefighting equipment on board will include: one 6-inch remote mon- itor mounted on the foredeck, one 8-inch remote monitor atop the pi- lothouse, two hull-mounted 4-inch remote underwharf monitors, one 4- inch remote monitor mounted on a telescoping tower at the aft deck- house face that extends to a light of 70 feet above the water, two manual 4-inch monitors on the main deck aft, and three hose manifolds (hy- drants) mounted on deck. The fire- main system will also supply water to a spray system for cooling the deckhouse and pilothouse.

Each vessel will be propelled by two Detroit Diesel 12V92TA en- gines, each rated to deliver 760 bhp at 2,300 rpm, driving fixed-pitch propellers through Twin Disc 530M "Omega" reverse/reduction gears with a ratio of 3.13:1. These vari- able-speed gears will enable the en- gines to be set at a constant rpm for driving the fire pumps, while pro- viding variable-speed propeller con- trol for maneuvering when firefight- ing.

Three of the design requirements were deemed "controlling" by the

Nickum & Spaulding design team headed by Paul Gow, and were the foundation upon which the design was developed. These requirements were: machinery size and power to develop a water flow of 10,000 gpm at 165 psi; vessel hull form and length to enable a sprint speed of 15-16 knots; and sufficient beam to provide adequate stability to coun- teract nozzle thrust athwartships.

The engine configuration selected will provide the necessary horse- power to travel at 15 knots, and once on station at a fire, the boat's crew can switch the gearbox to the

Omega mode and set the engines at 1,800 rpm, the required operating rpm for the 2,500-gpm fire pumps.

Then by bringing the dedicated fire pump engine on line, the crew will have available the hull fire flow capability of 10,000 gpm, with 600 bhp still available for maneuvering.

Triple "A" South, San Diego, Cal- if., was recently awarded a $3,013,989 firm-fixed-price contract for the selected availability for the

USS Tarawa (LHA-1). The work will be performed in San Diego, and is expected to be completed by No- vember 26. The contract funds would have expired at the end of the current fiscal year. The contracting activity is the Supervisor of Ship- building, Conversion and Repair,

At a recent all-day government- industry forum sponsored by the

Marine Machinery Association (MMA), representatives of 52 com- panies engaged in a spirited ex- change of views and information with U.S. Navy officials. In 12 pres- entations, both groups presented positions on the theme, "Maintain- ing Quality in Acquisition," and each speaker faced searching ques- tions from a totally involved au- dience. At the meeting, held in

Crystal City, Va., more than 100 representatives of the Navy and its suppliers had, as one observer de- scribed, "the most useful give-and- take session we've ever had with the

MMA is a nonprofit trade associa- tion dedicated to serving the Navy by promoting ethics in business by both industry and the government, and to insuring quality products and services for the fleet. The Asso- ciation represents the full spectrum of the marine industry, from hull, mechanical, and electrical to elec- tronics, computer, and combat weapons systems. The principal thrust of MMA is assisting both government and industry in better understanding each other's goals, objectives, problems, and re- straints.

Standing in for MMA president

The membership list of the MARINE MACHINERY ASSOCIATION is constantly growing. Current members of the Marine Machinery Asso- ciation include the following leading corporations:

CIATION. Complete details regarding benefits and membership may be obtained by contacting: