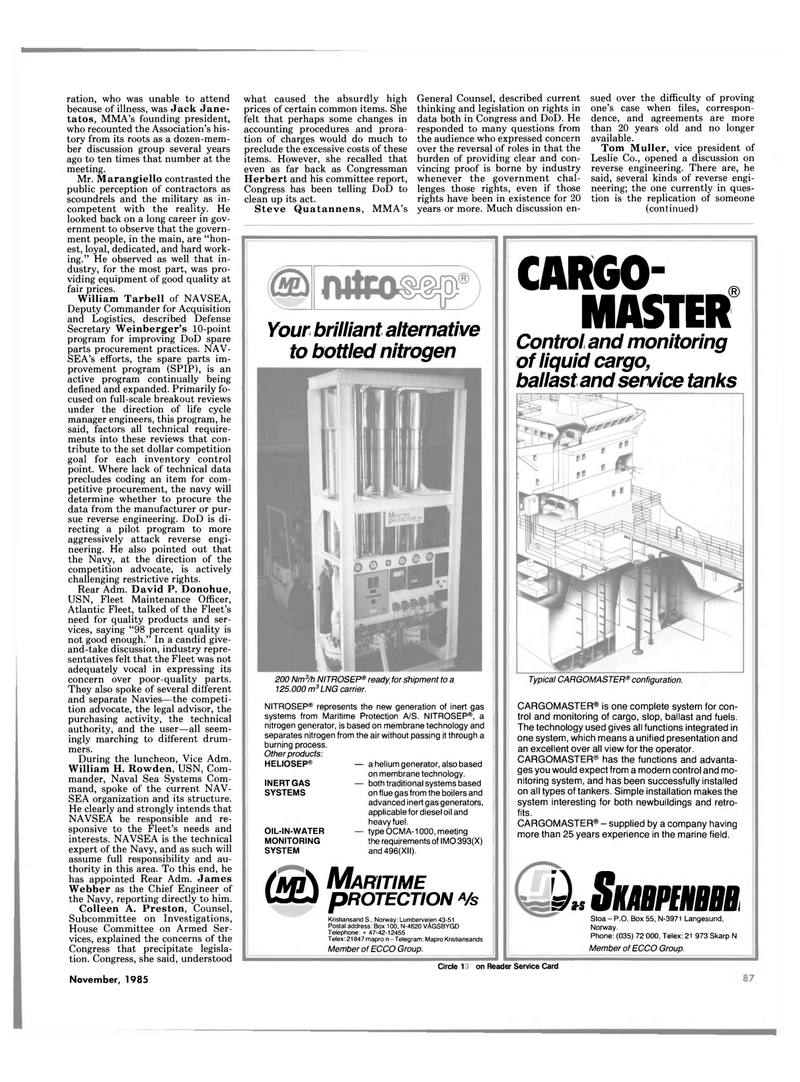 ration, who was unable to attend because of illness, was Jack Jane- tatos, MMA's founding president, who recounted the Association's his- tory from its roots as a dozen-mem- ber discussion group several years ago to ten times that number at the meeting.

Mr. Marangiello contrasted the public perception of contractors as scoundrels and the military as in- competent with the reality. He looked back on a long career in gov- ernment to observe that the govern- ment people, in the main, are "hon- est, loyal, dedicated, and hard work- ing." He observed as well that in- dustry, for the most part, was pro- viding equipment of good quality at fair prices.

SEA's efforts, the spare parts im- provement program (SPIP), is an active program continually being defined and expanded. Primarily fo- cused on full-scale breakout reviews under the direction of life cycle manager engineers, this program, he said, factors all technical require- ments into these reviews that con- tribute to the set dollar competition goal for each inventory control point. Where lack of technical data precludes coding an item for com- petitive procurement, the navy will determine whether to procure the data from the manufacturer or pur- sue reverse engineering. DoD is di- recting a pilot program to more aggressively attack reverse engi- neering. He also pointed out that the Navy, at the direction of the competition advocate, is actively challenging restrictive rights.

Atlantic Fleet, talked of the Fleet's need for quality products and ser- vices, saying "98 percent quality is not good enough." In a candid give- and-take discussion, industry repre- sentatives felt that the Fleet was not adequately vocal in expressing its concern over poor-quality parts.

During the luncheon, Vice Adm.

SEA organization and its structure.

He clearly and strongly intends that

NAVSEA be responsible and re- sponsive to the Fleet's needs and interests. NAVSEA is the technical expert of the Navy, and as such will assume full responsibility and au- thority in this area. To this end, he has appointed Rear Adm. James

Webber as the Chief Engineer of the Navy, reporting directly to him.

House Committee on Armed Ser- vices, explained the concerns of the

Congress that precipitate legisla- tion. Congress, she said, understood what caused the absurdly high prices of certain common items. She felt that perhaps some changes in accounting procedures and prora- tion of charges would do much to preclude the excessive costs of these items. However, she recalled that even as far back as Congressman

Herbert and his committee report,

Congress has been telling DoD to clean up its act.

General Counsel, described current thinking and legislation on rights in data both in Congress and DoD. He responded to many questions from the audience who expressed concern over the reversal of roles in that the burden of providing clear and con- vincing proof is borne by industry whenever the government chal- lenges those rights, even if those rights have been in existence for 20 years or more. Much discussion en- sued over the difficulty of proving one's case when files, correspon- dence, and agreements are more than 20 years old and no longer available.

Leslie Co., opened a discussion on reverse engineering. There are, he said, several kinds of reverse engi- neering; the one currently in ques- tion is the replication of someone (continued)

Your brilliant alternative to bottled nitrogen

NITROSEP® represents the new generation of inert gas systems from Maritime Protection A/S. NITROSEP®, a nitrogen generator, is based on membrane technology and separates nitrogen from the air without passing it through a burning process.

HELIOSEP® — a helium generator, also based on membrane technology.

INERT GAS — both traditional systems based

SYSTEMS on flue gas from the boilers and advanced inert gas generators, applicable for diesel oil and heavy fuel. — type OCMA-1000, meeting the requirements of IMO 393(X) and 496(XII).

Control and monitoring of liquid cargo, ballast and service tanks

CARGOMASTER® is one complete system for con- trol and monitoring of cargo, slop, ballast and fuels.

The technology used gives all functions integrated in one system, which means a unified presentation and an excellent over all view for the operator.

CARGOMASTER® has the functions and advanta- ges you would expect from a modern control and mo- nitoring system, and has been successfully installed on all types of tankers. Simple installation makes the system interesting for both newbuildings and retro- fits.

CARGOMASTER® - supplied by a company having more than 25 years experience in the marine field.