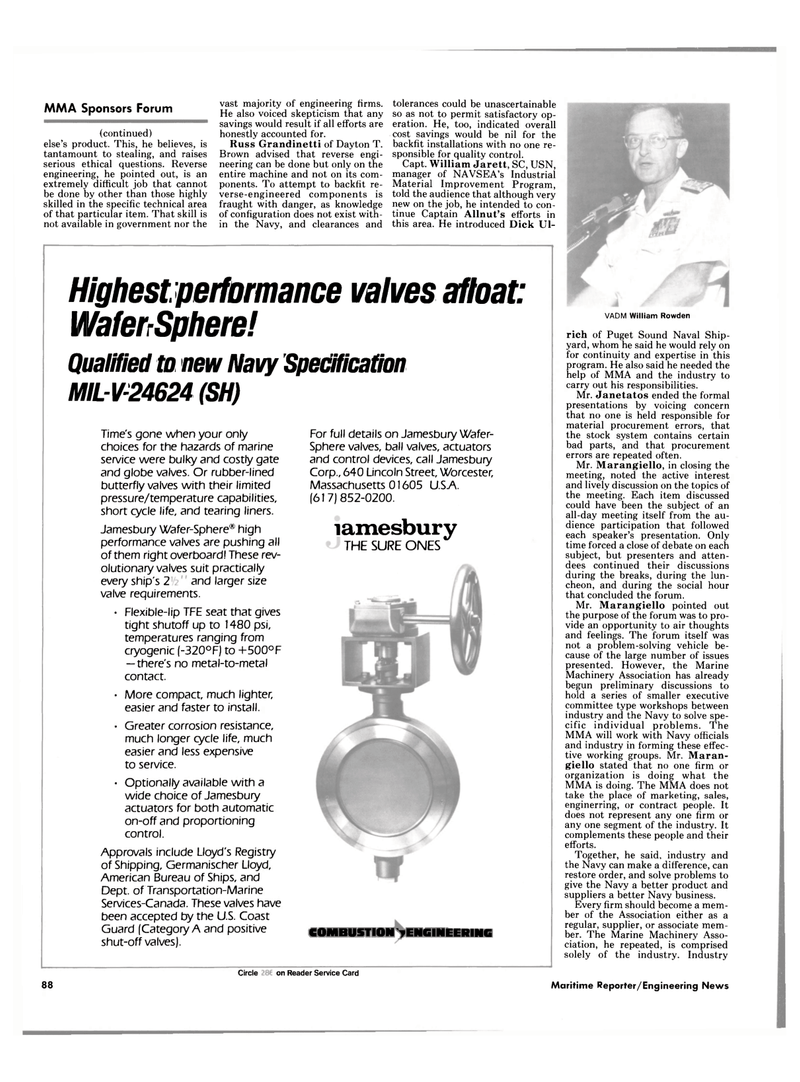 MMA Sponsors Forum (continued) else's product. This, he believes, is tantamount to stealing, and raises serious ethical questions. Reverse engineering, he pointed out, is an extremely difficult job that cannot be done by other than those highly skilled in the specific technical area of that particular item. That skill is not available in government nor the vast majority of engineering firms.

He also voiced skepticism that any savings would result if all efforts are honestly accounted for.

Brown advised that reverse engi- neering can be done but only on the entire machine and not on its com- ponents. To attempt to backfit re- verse-engineered components is fraught with danger, as knowledge of configuration does not exist with- in the Navy, and clearances and tolerances could be unascertainable so as not to permit satisfactory op- eration. He, too, indicated overall cost savings would be nil for the backfit installations with no one re- sponsible for quality control.

Material Improvement Program, told the audience that although very new on the job, he intended to con- tinue Captain Allnut's efforts in this area. He introduced Dick Ul-

Time's gone when your only choices for the hazards of marine service were bulky and costly gate and globe valves. Or rubber-lined butterfly valves with their limited pressure/temperature capabilities, short cycle life, and tearing liners.

Jamesbury Wafer-Sphere® high performance valves are pushing all of them right overboard! These rev- olutionary valves suit practically every ship's 2and larger size valve requirements. • Flexible-lip TFE seat that gives tight shutoff up to 1480 psi, temperatures ranging from cryogenic (-320° F) to +500°F — there's no metal-to-metal contact. • More compact, much lighter, easier and faster to install. • Greater corrosion resistance, much longer cycle life, much easier and less expensive to service. • Optionally available with a wide choice of Jamesbury actuators for both automatic on-off and proportioning control.

American Bureau of Ships, and

Services-Canada. These valves have been accepted by the U.S. Coast

For full details on Jamesbury Wafer-

VADM William Rowden rich of Puget Sound Naval Ship- yard, whom he said he would rely on for continuity and expertise in this program. He also said he needed the help of MMA and the industry to carry out his responsibilities.

Mr. Janetatos ended the formal presentations by voicing concern that no one is held responsible for material procurement errors, that the stock system contains certain bad parts, and that procurement errors are repeated often.

Mr. Marangiello, in closing the meeting, noted the active interest and lively discussion on the topics of the meeting. Each item discussed could have been the subject of an all-day meeting itself from the au- dience participation that followed each speaker's presentation. Only time forced a close of debate on each subject, but presenters and atten- dees continued their discussions during the breaks, during the lun- cheon, and during the social hour that concluded the forum.

Mr. Marangiello pointed out the purpose of the forum was to pro- vide an opportunity to air thoughts and feelings. The forum itself was not a problem-solving vehicle be- cause of the large number of issues presented. However, the Marine

Machinery Association has already begun preliminary discussions to hold a series of smaller executive committee type workshops between industry and the Navy to solve spe- cific individual problems. The

MMA will work with Navy officials and industry in forming these effec- tive working groups. Mr. Maran- giello stated that no one firm or organization is doing what the

MMA is doing. The MMA does not take the place of marketing, sales, enginerring, or contract people. It does not represent any one firm or any one segment of the industry. It complements these people and their efforts.

Together, he said, industry and the Navy can make a difference, can restore order, and solve problems to give the Navy a better product and suppliers a better Navy business.

Every firm should become a mem- ber of the Association either as a regular, supplier, or associate mem- ber. The Marine Machinery Asso- ciation, he repeated, is comprised solely of the industry. Industry