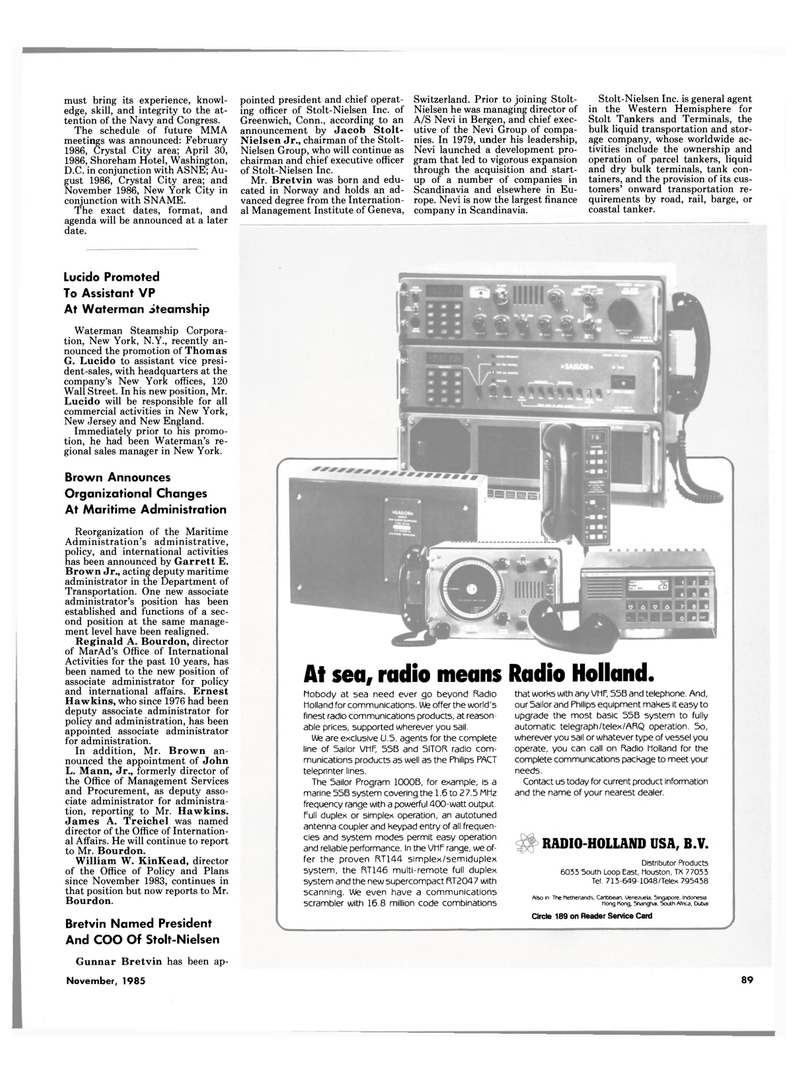 must bring its experience, knowl- edge, skill, and integrity to the at- tention of the Navy and Congress.

The exact dates, format, and agenda will be announced at a later date.

Lucido will be responsible for all commercial activities in New York,

Immediately prior to his promo- tion, he had been Waterman's re- gional sales manager in New York.

Reorganization of the Maritime

Administration's administrative, policy, and international activities has been announced by Garrett E.

Brown Jr., acting deputy maritime administrator in the Department of

Transportation. One new associate administrator's position has been established and functions of a sec- ond position at the same manage- ment level have been realigned.

Reginald A. Bourdon, director of MarAd's Office of International

Activities for the past 10 years, has been named to the new position of associate administrator for policy and international affairs. Ernest

In addition, Mr. Brown an- nounced the appointment of John

James A. Treichel was named director of the Office of Internation- al Affairs. He will continue to report to Mr. Bourdon.

William W. KinKead, director of the Office of Policy and Plans since November 1983, continues in that position but now reports to Mr.

Gunnar Bretvin has been ap- pointed president and chief operat- ing officer of Stolt-Nielsen Inc. of

Greenwich, Conn., according to an announcement by Jacob Stolt-

Nielsen Jr., chairman of the Stolt-

Nielsen Group, who will continue as chairman and chief executive officer of Stolt-Nielsen Inc.

Mr. Bretvin was born and edu- cated in Norway and holds an ad- vanced degree from the Internation- al Management Institute of Geneva,

Switzerland. Prior to joining Stolt-

Nielsen he was managing director of

A/S Nevi in Bergen, and chief exec- utive of the Nevi Group of compa- nies. In 1979, under his leadership,

Scandinavia and elsewhere in Eu- rope. Nevi is now the largest finance company in Scandinavia.

Stolt-Nielsen Inc. is general agent in the Western Hemisphere for

Stolt Tankers and Terminals, the bulk liquid transportation and stor- age company, whose worldwide ac- tivities include the ownership and operation of parcel tankers, liquid and dry bulk terminals, tank con- tainers, and the provision of its cus- tomers' onward transportation re- quirements by road, rail, barge, or coastal tanker.

Mobody at sea need ever go beyond Radio

Holland for communications. We offer the world's finest radio communications products, at reason- able prices, supported wherever you sail.

We are exclusive U.5. agents for the complete line of Sailor VHP, 55B and 5ITOR radio com- munications products as well as the Philips PACT teleprinter lines.

Pull duplex or simplex operation, an autotuned antenna coupler and Keypad entry of all frequen- cies and system modes permit easy operation and reliable performance. In the VHP range, we of- fer the proven RT144 simplex/semiduplex system, the RT146 multi-remote full duplex system and the new supercompact RT2047 with scanning. We even have a communications scrambler with 16.8 million code combinations that works with any VHP, 55B and telephone. And, our Sailor and Philips equipment makes it easy to upgrade the most basic 55B system to fully automatic telegraph/telex/ARQ operation. 5o, wherever you sail or whatever type of vessel you operate, you can call on Radio Holland for the complete communications package to meet your needs.

Contact us today for current product information and the name of your nearest dealer.