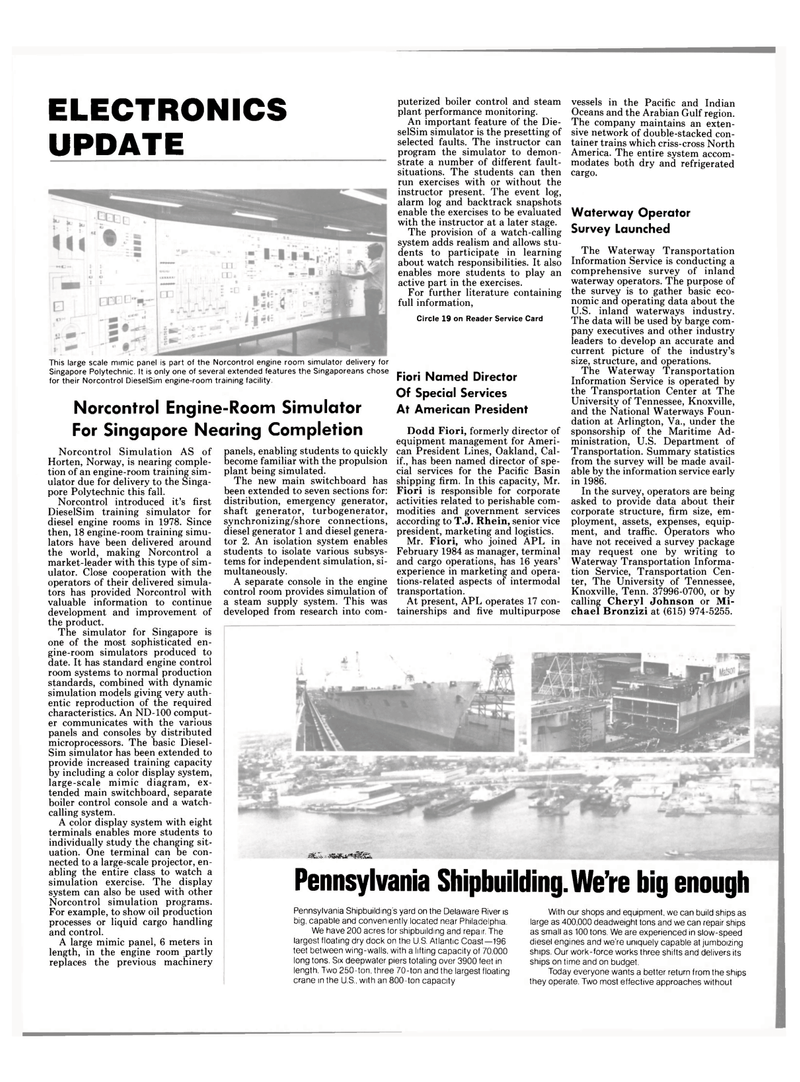 Singapore Polytechnic. It is only one of several extended features the Singaporeans chose for their Norcontrol DieselSim engine-room training facility.

Norcontrol Simulation AS of

Horten, Norway, is nearing comple- tion of an engine-room training sim- ulator due for delivery to the Singa- pore Polytechnic this fall.

DieselSim training simulator for diesel engine rooms in 1978. Since then, 18 engine-room training simu- lators have been delivered around the world, making Norcontrol a market-leader with this type of sim- ulator. Close cooperation with the operators of their delivered simula- tors has provided Norcontrol with valuable information to continue development and improvement of the product.

The simulator for Singapore is one of the most sophisticated en- gine-room simulators produced to date. It has standard engine control room systems to normal production standards, combined with dynamic simulation models giving very auth- entic reproduction of the required characteristics. An ND-100 comput- er communicates with the various panels and consoles by distributed microprocessors. The basic Diesel-

A color display system with eight terminals enables more students to individually study the changing sit- uation. One terminal can be con- nected to a large-scale projector, en- abling the entire class to watch a simulation exercise. The display system can also be used with other

For example, to show oil production processes or liquid cargo handling and control.

A large mimic panel, 6 meters in length, in the engine room partly replaces the previous machinery panels, enabling students to quickly become familiar with the propulsion plant being simulated.

A separate console in the engine control room provides simulation of a steam supply system. This was developed from research into com- puterized boiler control and steam plant performance monitoring.

An important feature of the Die- selSim simulator is the presetting of selected faults. The instructor can program the simulator to demon- strate a number of different fault- situations. The students can then run exercises with or without the instructor present. The event log, alarm log and backtrack snapshots enable the exercises to be evaluated with the instructor at a later stage.

The provision of a watch-calling system adds realism and allows stu- dents to participate in learning about watch responsibilities. It also enables more students to play an active part in the exercises.

Dodd Fiori, formerly director of equipment management for Ameri- can President Lines, Oakland, Cal- if., has been named director of spe- cial services for the Pacific Basin shipping firm. In this capacity, Mr.

Mr. Fiori, who joined APL in

February 1984 as manager, terminal and cargo operations, has 16 years' experience in marketing and opera- tions-related aspects of intermodal transportation.

At present, APL operates 17 con- tainerships and five multipurpose vessels in the Pacific and Indian

Oceans and the Arabian Gulf region.

Information Service is conducting a comprehensive survey of inland waterway operators. The purpose of the survey is to gather basic eco- nomic and operating data about the

The data will be used by barge com- pany executives and other industry leaders to develop an accurate and current picture of the industry's size, structure, and operations.

Information Service is operated by the Transportation Center at The

University of Tennessee, Knoxville, and the National Waterways Foun- dation at Arlington, Va., under the sponsorship of the Maritime Ad- ministration, U.S. Department of

Transportation. Summary statistics from the survey will be made avail- able by the information service early in 1986.

In the survey, operators are being asked to provide data about their corporate structure, firm size, em- ployment, assets, expenses, equip- ment, and traffic. Operators who have not received a survey package may request one by writing to

Pennsylvania Shipbuilding's yard on the Delaware River is big, capable and conveniently located near Philadelphia.

We have 200 acres for shipbuilding and repair The largest floating dry dock on the U.S. Atlantic Coast—196 teet between wing-walls, with a lifting capacity of 70.000 long tons. Six deepwater piers totaling over 3900 feet in length. Two 250-ton, three 70-ton and the largest floating crane in the U.S., with an 800-ton capacity

With our shops and equipment, we can build ships as large as 400,000 deadweight tons and we can repair ships as small as 100 tons. We are experienced in slow-speed diesel engines and we're uniquely capable at jumboizing ships. Our work-force works three shifts and delivers its ships on time and on budget.

Today everyone wants a better return from the ships they operate. Two most effective approaches without