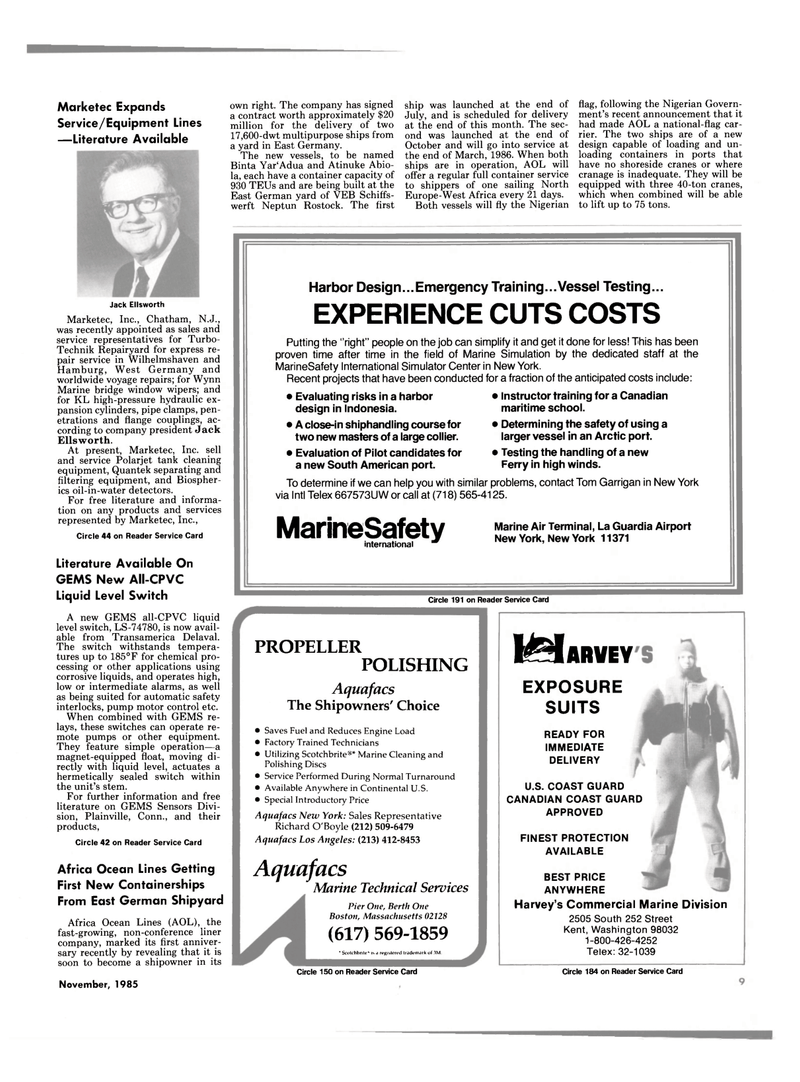 Service/Equipment Lines —Literature Available own right. The company has signed a contract worth approximately $20 million for the delivery of two 17,600-dwt multipurpose ships from a yard in East Germany.

The new vessels, to be named

Binta Yar'Adua and Atinuke Abio- la, each have a container capacity of 930 TEUs and are being built at the

East German yard of VEB Schiffs- werft Neptun Rostock. The first ship was launched at the end of

October and will go into service at the end of March, 1986. When both ships are in operation, AOL will offer a regular full container service to shippers of one sailing North

Both vessels will fly the Nigerian flag, following the Nigerian Govern- ment's recent announcement that it had made AOL a national-flag car- rier. The two ships are of a new design capable of loading and un- loading containers in ports that have no shoreside cranes or where cranage is inadequate. They will be equipped with three 40-ton cranes, which when combined will be able to lift up to 75 tons.

Technik Repairyard for express re- pair service in Wilhelmshaven and

For free literature and informa- tion on any products and services represented by Marketec, Inc.,

The switch withstands tempera- tures up to 185°F for chemical pro- cessing or other applications using corrosive liquids, and operates high, low or intermediate alarms, as well as being suited for automatic safety interlocks, pump motor control etc.

When combined with GEMS re- lays, these switches can operate re- mote pumps or other equipment.

For further information and free literature on GEMS Sensors Divi- sion, Plainville, Conn., and their products,

Africa Ocean Lines (AOL), the fast-growing, non-conference liner company, marked its first anniver- sary recently by revealing that it is soon to become a shipowner in its

Putting the "right" people on the job can simplify it and get it done for less! This has been proven time after time in the field of Marine Simulation by the dedicated staff at the

Recent projects that have been conducted for a fraction of the anticipated costs include: • Evaluating risks in a harbor design in Indonesia. • A close-in shiphandling course for two new masters of a large collier. • Evaluation of Pilot candidates for a new South American port. • Instructor training for a Canadian maritime school. • Determining the safety of using a larger vessel in an Arctic port. • Testing the handling of a new

Pier One, Berth One