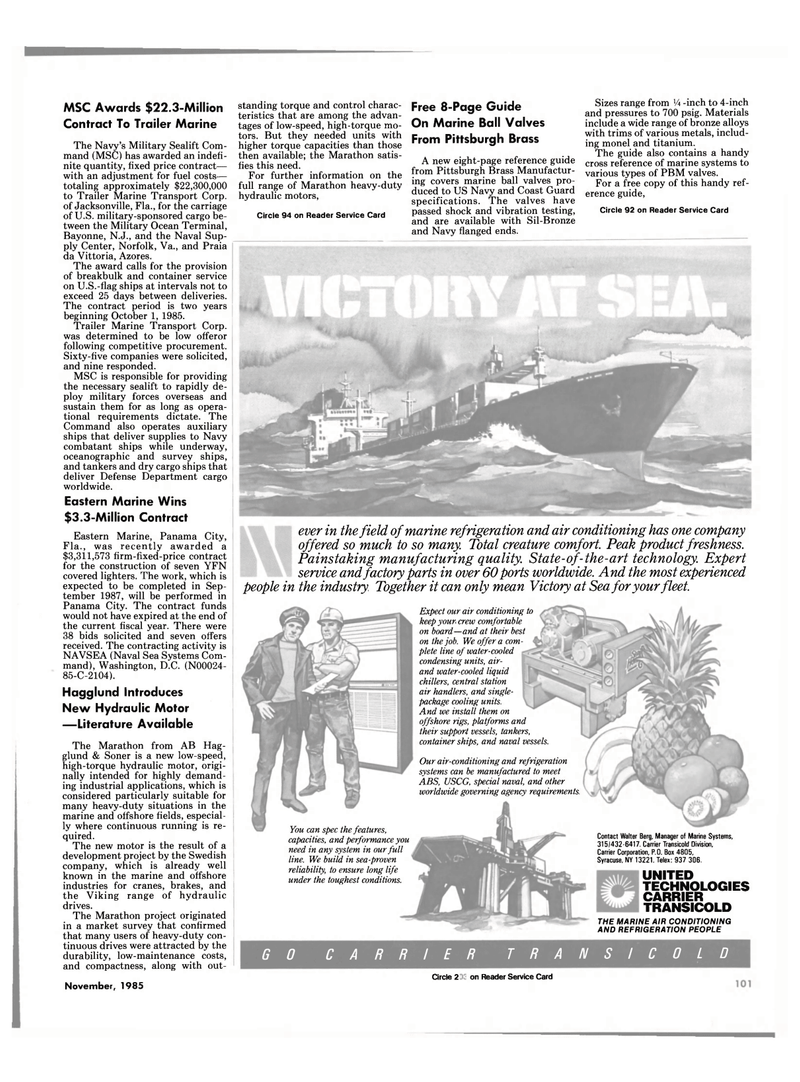 The award calls for the provision of breakbulk and container service on U.S.-flag ships at intervals not to exceed 25 days between deliveries.

MSC is responsible for providing the necessary sealift to rapidly de- ploy military forces overseas and sustain them for as long as opera- tional requirements dictate. The

Fla., was recently awarded a $3,311,573 firm-fixed-price contract for the construction of seven YFN covered lighters. The work, which is expected to be completed in Sep- tember 1987, will be performed in

Panama City. The contract funds would not have expired at the end of the current fiscal year. There were 38 bids solicited and seven offers received. The contracting activity is

The Marathon from AB Hag- glund & Soner is a new low-speed, high-torque hydraulic motor, origi- nally intended for highly demand- ing industrial applications, which is considered particularly suitable for many heavy-duty situations in the marine and offshore fields, especial- ly where continuous running is re- quired.

The new motor is the result of a development project by the Swedish company, which is already well known in the marine and offshore industries for cranes, brakes, and the Viking range of hydraulic drives.

The Marathon project originated in a market survey that confirmed that many users of heavy-duty con- tinuous drives were attracted by the durability, low-maintenance costs, and compactness, along with out-

November, 1985 standing torque and control charac- teristics that are among the advan- tages of low-speed, high-torque mo- tors. But they needed units with higher torque capacities than those then available; the Marathon satis- fies this need.

For further information on the full range of Marathon heavy-duty hydraulic motors,

A new eight-page reference guide from Pittsburgh Brass Manufactur- ing covers marine ball valves pro- duced to US Navy and Coast Guard specifications. The valves have passed shock and vibration testing, and are available with Sil-Bronze and Navy flanged ends.

Sizes range from lA -inch to 4-inch and pressures to 700 psig. Materials include a wide range of bronze alloys with trims of various metals, includ- ing monel and titanium.

For a free copy of this handy ref- erence guide,

Circle 92 on Reader Service Card ever in the field of marine refrigeration and air conditioning has one company offered so much to so many. Total creature comfort. Peak product freshness.

Painstaking manufacturing quality. State-of-the-art technology. Expert service and factory parts in over 60 ports worldwide. And the most experienced people in the industry. Together it can only mean Victory at Sea for your fleet.

Expect our air conditioning to keep your crew comfortable on board—and at their best on the job. We offer a com- plete line of water-cooled condensing units, air- and water-cooled liquid chillers, central station air handlers, and single- package cooling units.

And we install them on offshore rigs, platforms and their support vessels, tankers, container ships, and naval vessels.

Our air-conditioning and refrigeration systems can be manufactured to meet

You can spec the features, capacities, and performance you need in any system in our full line. We build in sea-proven reliability, to ensure long life under the toughest conditions.