The U.S. Naval Training Systems Center has awarded Sperry Corporation a $17.5-million contract to design, develop, and assemble a fullmission simulator for the Landing Craft, Air Cushion (LCAC). Under the terms of the contract, the trainer is scheduled to be ready for operation by August 1989.

This LCAC trainer is said to be the first in the free world to simulate the performance and environment of a hovercraft. It will recreate not only the unique motion dynamics of the hovercraft in various sea conditions, but also the high-speed transition from sea to land and land to sea through varying surf conditions.

The LCAC, manufactured by the Bell Aerospace division of Textron, is a high-speed, ship-to-shore and over-the-beach hovercraft landing vehicle, capable of carrying a 60-ton payload. It is designed to carry the combat and logistics vehicles of a Marine Corps landing force to shore at speeds in excess of 40 knots. Current landing craft have a top speed of eight knots.

Don O. Hartman, Sperry's program manager for the LCAC trainer, said the simulator will have a computer- generated imagery system capable of producing full-daylight scenes. Like many aircraft simulators, the LCAC trainer will also have a six-degree-of-freedom motion base. To permit flexibility in training and ease of skill transfer, the simulation system will be equipped with two separate instructor stations, one located on the motion platform, the other located off the platform nearby.

The LCAC trainer will simulate the craft's entire control cabin, including the three trainee stations for the craftmaster, engineer, and navigator, as well as the group commander station. The trainer's instructor will be able to teach all maneuvers likely to be encountered during a complete mission. This includes docking and docking at the mother ship, maneuvering in waters ranging from dead calm to Sea State 5, approaching land, and maneuvering through the surf zone to the beach zone and return. In addition, the trainer will enable students to recognize navigation aids with and without radar. It will also be capable of simulating malfunctions and allowing instruction in the proper reaction to emergencies.

For free literature on the full range of marine electronics from Sperry, Circle 42 on Reader Service Card 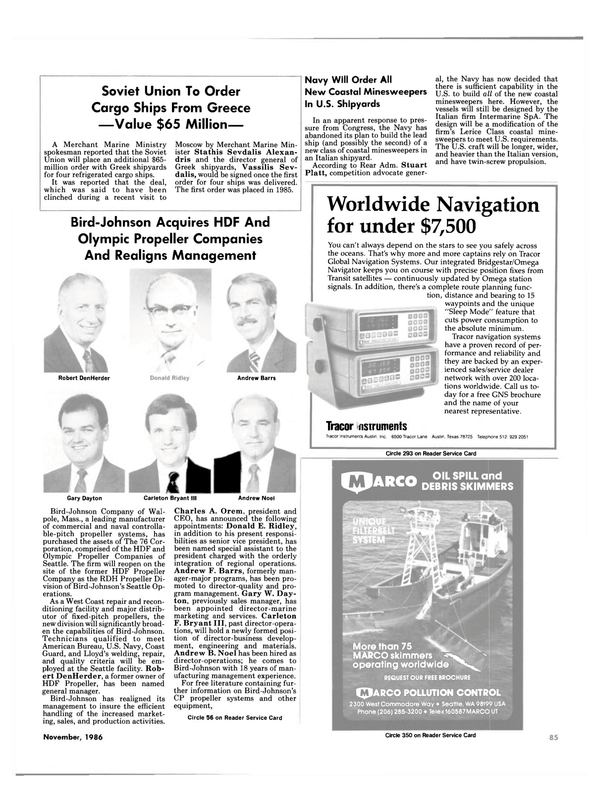