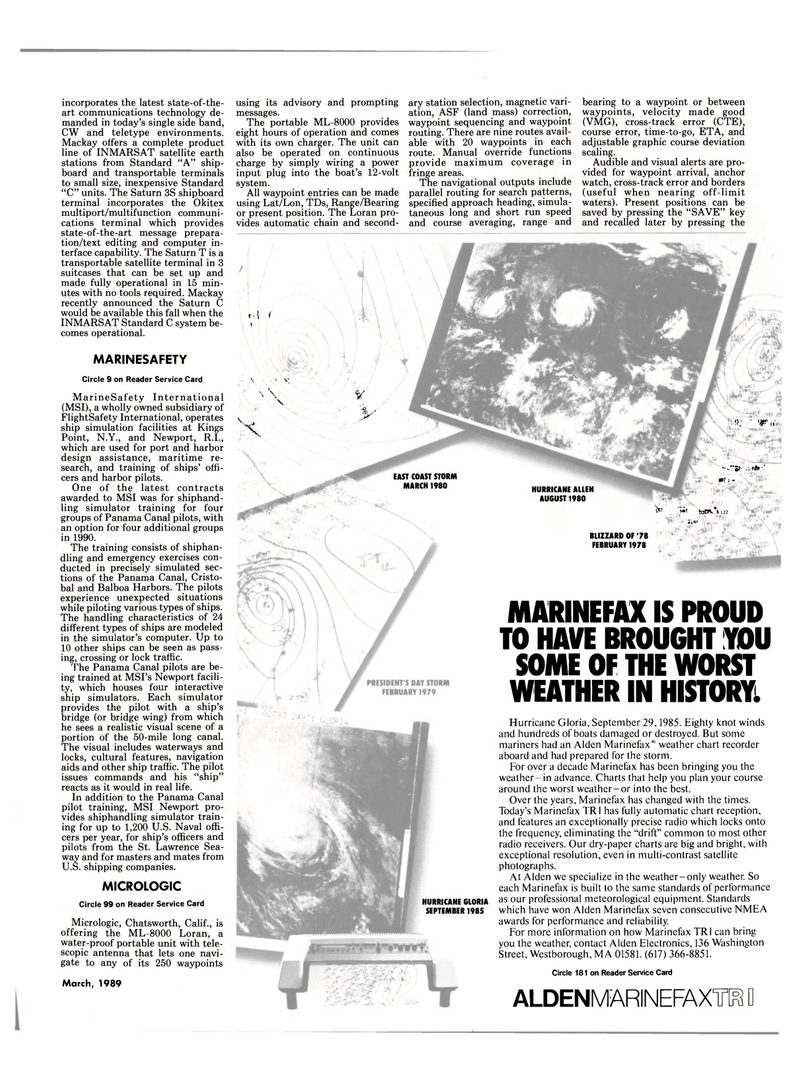 Mackay offers a complete product line of" INMARSAT satellite earth stations from Standard "A" ship- board and transportable terminals to small size, inexpensive Standard "C" units. The Saturn 3S shipboard terminal incorporates the Okitex multiport/multifunction communi- cations terminal which provides state-of-the-art message prepara- tion/text editing and computer in- terface capability. The Saturn T is a transportable satellite terminal in 3 suitcases that can be set up and made fully operational in 15 min- utes with no tools required. Mackay recently announced the Saturn C would be available this fall when the

Point, N.Y., and Newport, R.I., which are used for port and harbor design assistance, maritime re- search, and training of ships' offi- cers and harbor pilots.

One of the latest contracts awarded to MSI was for shiphand- ling simulator training for four groups of Panama Canal pilots, with an option for four additional groups in 1990.

The handling characteristics of 24 different types of ships are modeled in the simulator's computer. Up to 10 other ships can be seen as pass- ing, crossing or lock traffic.

The Panama Canal pilots are be- ing trained at MSI's Newport facili- ty, which houses four interactive ship simulators. Each simulator provides the pilot with a ship's bridge (or bridge wing) from which he sees a realistic visual scene of a portion of the 50-mile long canal.

The visual includes waterways and locks, cultural features, navigation aids and other ship traffic. The pilot issues commands and his "ship" reacts as it would in real life.

In addition to the Panama Canal pilot training, MSI Newport pro- vides shiphandling simulator train- ing for up to 1,200 U.S. Naval offi- cers per year, for ship's officers and pilots from the St. Lawrence Sea- way and for masters and mates from

Micrologic, Chatsworth, Calif., is offering the ML-8000 Loran, a water-proof portable unit with tele- scopic antenna that lets one navi- gate to any of its 250 waypoints

The portable ML-8000 provides eight hours of operation and comes with its own charger. The unit can also be operated on continuous charge by simply wiring a power input plug into the boat's 12-volt system.

MARINEFAX IS PROUD TO HAVE BROUGHT YOU

SOME OF THE WORST WEATHER IN HISTORY.

Hurricane Gloria, September 29,1985. Eighty knot winds and hundreds of boats damaged or destroyed. But some mariners had an Alden Marinefax™ weather chart recorder aboard and had prepared for the storm.

For over a decade Marinefax has been bringing you the weather- in advance. Charts that help you plan your course around the worst weather-or into the best.

Over the years, Marinefax has changed with the times.

Today's Marinefax TRI has fully automatic chart reception, and features an exceptionally precise radio which locks onto the frequency, eliminating the "drift" common to most other radio receivers. Our dry-paper charts are big and bright, with exceptional resolution, even in multi-contrast satellite photographs.

At Alden we specialize in the weather-only weather. So each Marinefax is built to the same standards of performance as our professional meteorological equipment. Standards which have won Alden Marinefax seven consecutive NMEA awards for performance and reliability.

For more information on how Marinefax TR I can bring you the weather, contact Alden Electronics, 136 Washington