Five post-Panamax size container ships will be propelled by the most powerful marine diesel engines ever ordered. Each of the 4,000 TEUplus ships booked from Hyundai Heavy Industries by Hyundai Merchant Marine (HMMC) is specified with a MAN B&W 12-cylinder K90MC-C engine offering a maximum output of 70,320 bhp at 104 rpm.

The 900-mm bore/2,300-mm stroke K90MC-C design is tailored to the demands of new generations of large containerships requiring speeds up to 25 knots. The shorter stroke and lighter weight also promote a more compact engine room for optimum box capacity from ships with either Panamax or wider-than- Panamax dimensions.

Excellent service experience is reported from the installations of this type of engine aboard the East Asiatic Company's 4,000 TEU containerships Arosia and Alsia.

Each was built to Panamax dimensions by Mitsui in 1990, with propulsion plants based on a 10-cylinder model developing 55,900 bhp.

The engines for the new HMMC containership series are under construction by the Engine & Machinery Division of Hyundai Heavy Industries for delivery to the yard during 1992.

The K90MC and MC-C models are the largest In MAN B&W's world market.

For complete details about the K90MC and MC-C series engines, Circle 122 on Reader Service Card 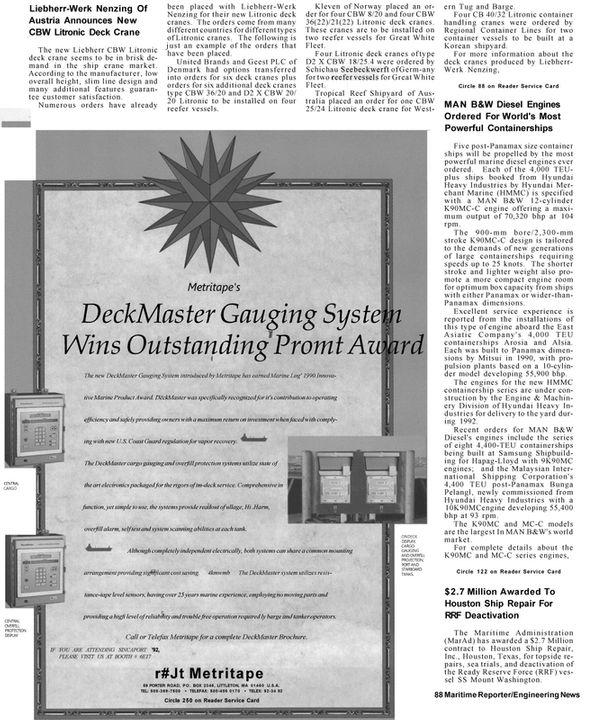