- A SHOWCASE - The growth of cruise passenger shipping, thought by some industry analysts in 1980s to be short-lived, has maintained its strong pace for over a decade. According to statistics released by the Cruise Lines International Association (CLIA), which represents 35 major cruise operators (about 95 percent of the capacity operating out of North America), the cruise shipping market has experienced an annual growth rate of 9.8 percent since 1980. Over the same period, capacity has risen by an annual rate of 8.3 percent.

In order to attract first-time and repeat passengers, many cruise lines are introducing trend-setting new tonnage. The following select portfolio of award-winning "Outstanding Cruise Ships," as chosen by the editors of MARITIME REPORTER, represents some of the most luxurious, precedent-setting, and innovative tonnage introduced in the last year by the major cruise lines.

According to Costa Cruise Lines, the 718-1/2-foot CostaClassica's traditional sleek exterior lines set the tone for a vessel that blends European style and quality with state-ofthe- art technology. The ship's interiors were designed by the renowned Italian architectural firm Gregotti Associati.

Extensive use of quality materials and refinements carry the contemporary elegance theme throughout the ship—six-foot gesso statues displayed in an elegant garden setting, floors made from Carrara marble, hand-made ceramic tiles, teak decks, $20 million in commissioned art and artistic furnishings, and tables set with fine crystal and china.

Positioned in the top of the mass market and the lower luxury market, the 1,300-passenger liner departs each Saturday from Ft. Lauderdale on alternating westbound and eastbound Caribbean cruises.

Both itineraries have been specially designed for year-round, seven-day sailings, calling at Ocho Rios, Grand Cayman, Playa del Carmen and Cozumel on her westward trip and San Juan, St. Thomas and St.

Maarten on her eastward venture.

Part of Costa Cruise Lines' "Euro- Luxe Cruises," the CostaClassica will be joined by the smaller 800- passenger CostaAllegra later this y e a r , and her sister, the CostaRomantica, in late 1993.

Business amenities aboard the ship include a 1,520-square-foot conference area, conveniently located in the center of the ship, designed to be flexible with one conference room seating 150 people, plus three 234- square-foot breakout rooms, each accommodating up to 30 people.

Built at a cost of about $95 million and under the supervision of Det norske Veritas, as well as the Spanish administration Inspeccion de Buques, the 494-foot Crown Monarch has 232 standard cabins on her Marina, Palm Beach and Coral Decks; 23 deluxe cabins on her Caribbean Deck; and 10 suites on her Monarch Deck. Deluxe cabins and suites have sitting rooms and bathtubs.

Suites are also outfitted with jacuzzis and balconies.

Registered in Panama, the Crown Monarch is served by Northern European and Scandinavian officers and a Filipino crew. She sails Saturdays from the Port of Palm Beach to Key West, Grand Cayman, Ocho Rios and Labadie Shores, Crown's private beach resort.

On the Marina Deck there is platform where passengers can disembark on tender boats for excursions to coves and beaches which may be "The most successful since "When our new 70,000 GRT 'Fantasy' class of cruise ships were on the drawing board we investigated different machinery concepts. It was soon found out that the power station concept, based on medium-speed diesels and a state-of- 1 • the-art AC propulsion system, was the way to proceed, f i MJ ABB Marine was selected as the main contractor for the electric propulsion and power plant, because they are by far the most exper- . 1 t 1 ienced suppliers of electric propulsion systems in the world. Recordings Ll 1C i i l J t v made during the sea trials had already proven that noise and vibration levels lay far below those occurring in any direct-driven ship today. The Fantasy manoeuvers beautifully even in heavy weather conditions in the narrow passage to Freeport, Bahamas. The possibility to run at any time a selected number of prime mover diesels at their optimum keeps our fuel and maintenance costs low. Adequate combustion also means cleaner exhaust emissions.

The ABB Cyclo plant has proven itself to be extremely reliable in operation. Very few minor faults have been recorded. When this occasionally has happened, the Miami-based ABB Service crew and manufacturer have been quick to respond and helpful.

All in all, I am impressed by the ABB Cyclo propulsion concept." We, too, are proud to be part of the four most successful ships since the Ark.

The main recreation area is on the Crown Deck, which features the dining room, casino, bar, two boutiques, and photography exhibition area. Other public spaces include the Crown Cabaret and Vision Lounge. The Ocean Terrace, a buffet area, the swimming pool, two jacuzzis and Splash Bar are located on the Monarch Deck. A disco is located on the Sun Deck.

The Ecstasy, sister of the M/S Fantasy, which made her debut last year, operates in the Caribbean on weekly cruises to Nassau, San Juan, St. Thomas and on alternating weeks to Playa del Carmen, Cozumel, Grand Cayman and Ocho Rios.

Kvaerner Masa-Yards is also building the Fascination and Sensation, which will be delivered in 1993 and 1994, respectively.

With her gross tonnage of70,637, the Ecstasy is able to carry almost 2,600 passengers in 1,020 cabins, served by a crew of over 900. She has an overall length of855-1/2 feet, waterline beam of 103.4 feet and draft of 25.3 feet. The AC propulsion drive system, supplied by ABB Marine, Helsinki, features Sulzer type engines with electrical shaft drives. The total power developed is 42 MW. There are six thrusters, three forward and three aft, with a total of 12,000 hp. She has a speed of 21 knots. More information on her Cyclo (cycloconverter) propulsion system is included in the article, ABB Marine Supplies Power For Four CCL Megaliners in this 1SS^rom the Ecstasy's seven-deckhigh Grand Atrium, passengers can walk the "City Lights" promenade and enjoy the urban conviviality of such rooms as the Metropolis Bar, Chinatown, Rolls Royce Cafe and the Neon Bar. The atrium features computerized color-changing neon with automated fiberoptic lighting to create the illusion of thousands of twinkling stars.

MONARCH OF THE SEAS Chantiers de I'Atlantique Circle 32 on Reader Service Card With the title of the world's largest passenger cruise ship, the 75,000- ton luxury megaliner Monarch of the Seas, emerged last year from the St. Nazaire, France, shipyard of Chantiers de I'Atlantique. Her sister, the Majesty of the Seas, is set to make her debut next month.

Built for Royal Caribbean Cruise Line, the Monarch is 880 feet long and has a maximum passenger capacity of 2,766, with 1,177 cabins, 732 of which are outside units and 445 inside units. Included in the total are 12 luxurious suites and 50 deluxe cabins with a balcony, all of which are located on the Bridge Deck.

Containing more than 14,000 tons of steel (twice that of the Eiffel Tower) and more than 170 feet high (the same height as the Statute of Liberty), the Monarch of the Seas sets passenger ship interior design standards.

For example, the Centrum, the ship's central meeting place from which most of its public spaces radiate was designed by Norwegian Nj al Eide, whose Oslo-based firm specializes in cruise vessel interiors.

At the base of the glass-walled elevators lie three pools of dancing water, an elegant piano platform and raised plaza linked by a parade stair. Forward of this area, the Centrum flows into the photo gallery with a stepped level fountain.

Each 9 PC20L engine is rated at 5,460 kw at 475 rpm, providing a total output of 21,840 kw on two shafts. The drive is through two Lohmann + Stolterfoht twin input/ single output gearboxes.

The main feature of the installation is the elastic suspension of the 92-ton Pielstick engine. The four 9 PC20Ls are separately secured on a frame, also used as the engine lubricating oil recovery sump (dry dump), from which the oil returns to main lubricating oil tank. The frame is fitted on the ship's foundation blocks by means of 22 rubber resilient pads.

REGAL PRINCESS Fincantieri Circle 33 on Reader Service Card Flying the Italian flag, the 70,000- grt, $200 million-plus cruise ship Regal Princess was delivered to P&O by Italian builder Fincantieri's Monfalcone yard. One of two P&O flagships built by Fincantieri, the Regal Princess has an overall length of 811 feet, breadth of 105 feet and draft of 26 feet.

She has 14 decks with a total of 798 passenger cabins, of which 436 are outside cabins, 178 inside cabins, 134 cabins with a balcony, 36 deluxe cabins and 14 suites. She will be manned by an international crew of 683. Her officers are of Italian nationality.

In all, the Regal Princess carries 1,748 passengers. She is provided with numerous public spaces, the principal ones consisting of a cinema with 169 seats, a theater seat- ing 740 and a restaurant able to serve about 844 people at one sitting.

There is a disco, a number of shops, bars and night clubs, gymnasiums, saunas and beauty salons.

The cupola, 197 feet long and 98 feet wide and made entirely of light alloy, houses a casino, as well as other facilities.

The Regal Princess also features a million-plus collection of museum class art showcasing the works of some of the world's most important contemporary artists. The collection is comprised of over 2,600 existing and specially commissioned paintings, sculptures, graphics and murals.

SOCIETY ADVENTURER Finnyards Circle 116 on Reader Service Card Designed for worldwide cruises lasting as long as eight weeks, the 403-foot Society Adventurer will take passengers to exotic locales, such as the Antarctic, Greenland, the Amazon River, and areas in the Pacific.

This new type of cruise vessel is capable of carrying its 188 passengers quite literally on all Seven Seas, according to Finnyards Ltd., the Finnish builders of the vessel.

The vessel was ordered in December 1989 under a contract worth about $75 million, complying with the requirements of Det norske Veritas 1A1, Ice 1A, Passenger vessel, Naut-B, bis, EO, and also USCG, U.S. Public Health and international regulations governing safety and pollution prevention.

All the passenger cabins and public spaces are designed by the German interior architect Willfried Kohnemann and his staff.

With an overall length of403 feet, breadth of 59 feet and draft of 15 feet, the Society Adventurer has 90 standard suites, all outside staterooms, and four luxury suites.

A powerful 770-kw KaMeWa bowthruster is installed for maneuverability. 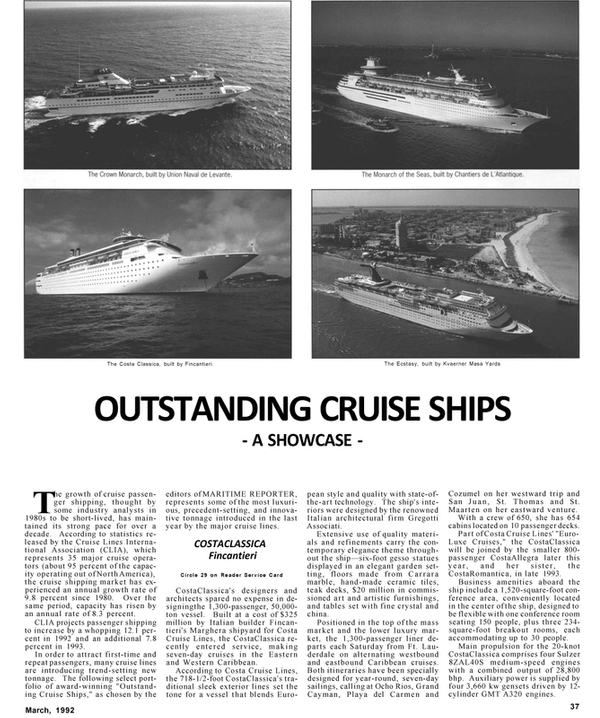