In May 1990, Metritape was approached by a barge manager of a major oil company, well in advance of projected compliance dates in New Jersey, to equip a fleet of integrated tank barges with vapor retention systems and associated closed-tank monitoring equipment.

Barge managers soon learned that the equipment not only reduced the possibility of spills, but also cut the time and cost of transfer operations.

In August 1990, a second major operator of integrated tug-barge systems in the mid-Atlantic approached Metritape to equip more t h an a dozen of its tank barges.

The mandated vapor recovery systems were being installed, essentially on schedule by terminal and vessel operators in New Jersey. These systems were complex, and introduced new training, technological and safety concerns for crews engaged in cargo transfers. Top level teams of experts put the finishing touches on new equipment and conducted the first tests and demonstrations for terminal and barge crews. Piping, flanging and signaling equipment appeared complex and crews were slow to adopt certain of the new requirements. Long-standing safe operating procedures needed modification as had been predicted by marine experts a decade before.

Work began for one of these fleets in November 1990 and the other in January 1991. As the first systems became operational, crews soon appreciated the improved cargo monitoring features.

Along the Gulf Coast, Louisiana was seen to be leading the way in 1990. It had drafted regulations similar in some respects to those in New Jersey and in California. Several barge operators with activities in the Gulf were in touch with Metritape and were contemplating Deck Master.

State regulators issued delayed compliance schedules based on periodic shipyard inspection schedules by the operators. The onset of inbound Coast Guard inspections appeared to be deferred until the mid-90s. Only two or three Gulf barge operators have proceeded to order new gaging systems which will meet requirements for closed tank gaging, independent high alarm, and on-deck monitoring capacity such as that offered by Deck Master. 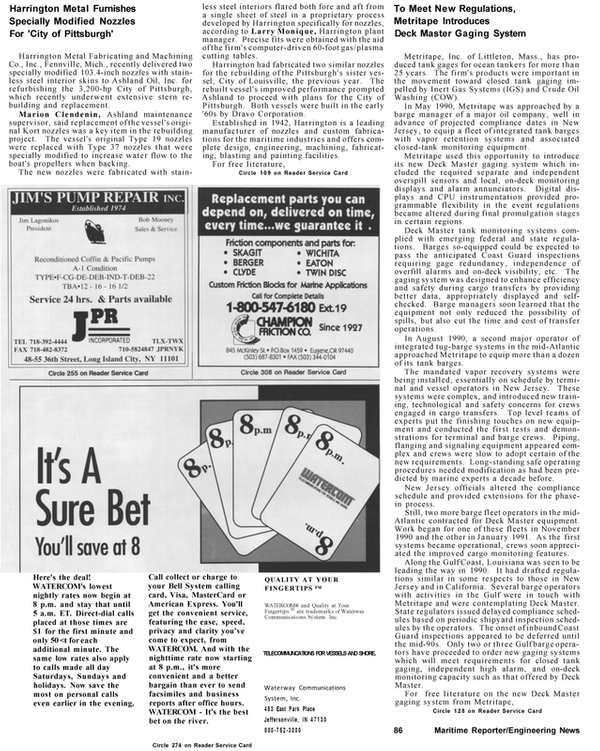