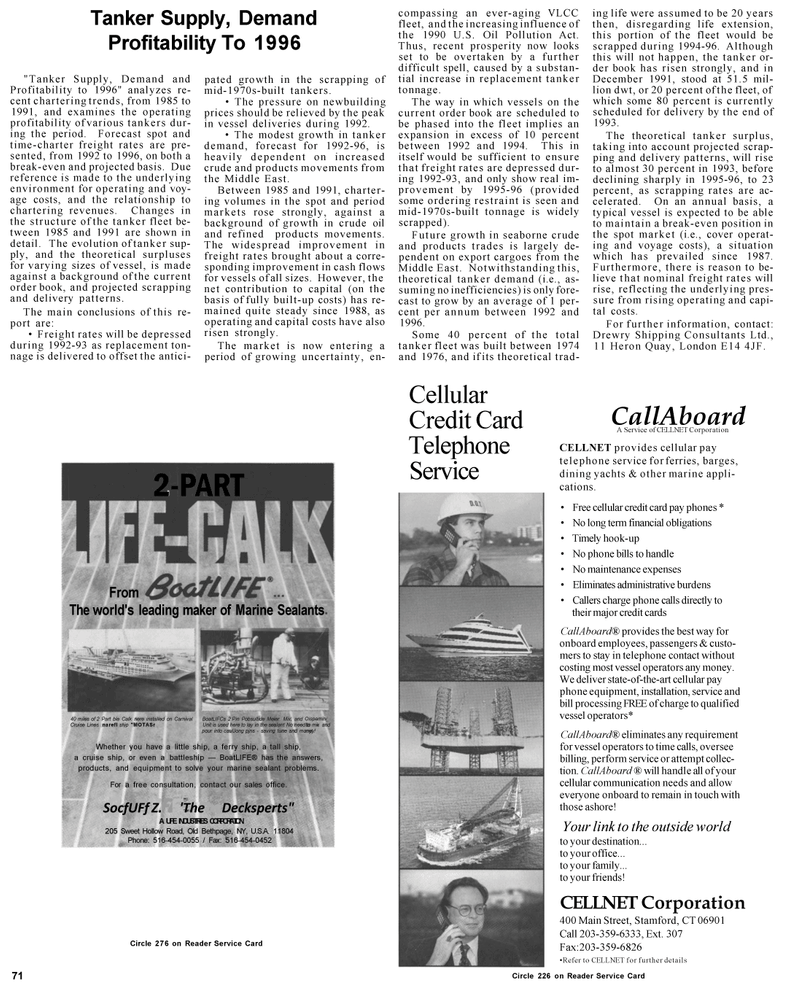 Profitability To 1996 "Tanker Supply, Demand and

Profitability to 1996" analyzes re- cent chartering trends, from 1985 to 1991, and examines the operating profitability of various tankers dur- ing the period. Forecast spot and time-charter freight rates are pre- sented, from 1992 to 1996, on both a break-even and projected basis. Due reference is made to the underlying environment for operating and voy- age costs, and the relationship to chartering revenues. Changes in the structure of the tanker fleet be- tween 1985 and 1991 are shown in detail. The evolution of tanker sup- ply, and the theoretical surpluses for varying sizes of vessel, is made against a background of the current order book, and projected scrapping and delivery patterns.

The main conclusions of this re- port are: • Freight rates will be depressed during 1992-93 as replacement ton- nage is delivered to offset the antici- pated growth in the scrapping of mid-1970s-built tankers. • The pressure on newbuilding prices should be relieved by the peak in vessel deliveries during 1992. • The modest growth in tanker demand, forecast for 1992-96, is heavily dependent on increased crude and products movements from the Middle East.

Between 1985 and 1991, charter- ing volumes in the spot and period markets rose strongly, against a background of growth in crude oil and refined products movements.

The widespread improvement in freight rates brought about a corre- sponding improvement in cash flows for vessels of all sizes. However, the net contribution to capital (on the basis of fully built-up costs) has re- mained quite steady since 1988, as operating and capital costs have also risen strongly.

The market is now entering a period of growing uncertainty, en- compassing an ever-aging VLCC fleet, and the increasing influence of the 1990 U.S. Oil Pollution Act.

The way in which vessels on the current order book are scheduled to be phased into the fleet implies an expansion in excess of 10 percent between 1992 and 1994. This in itself would be sufficient to ensure that freight rates are depressed dur- ing 1992-93, and only show real im- provement by 1995-96 (provided some ordering restraint is seen and mid-1970s-built tonnage is widely scrapped).

Middle East. Notwithstanding this, theoretical tanker demand (i.e., as- suming no inefficiencies) is only fore- cast to grow by an average of 1 per- cent per annum between 1992 and 1996.

Some 40 percent of the total tanker fleet was built between 1974 and 1976, and if its theoretical trad- ing life were assumed to be 20 years then, disregarding life extension, this portion of the fleet would be scrapped during 1994-96. Although this will not happen, the tanker or- der book has risen strongly, and in

The theoretical tanker surplus, taking into account projected scrap- ping and delivery patterns, will rise to almost 30 percent in 1993, before declining sharply in 1995-96, to 23 percent, as scrapping rates are ac- celerated. On an annual basis, a typical vessel is expected to be able to maintain a break-even position in the spot market (i.e., cover operat- ing and voyage costs), a situation which has prevailed since 1987.

Furthermore, there is reason to be- lieve that nominal freight rates will rise, reflecting the underlying pres- sure from rising operating and capi- tal costs.

A Service of CELLNET Corporation

CallAboard® provides the best way for onboard employees, passengers & custo- mers to stay in telephone contact without costing most vessel operators any money.

CallAboard® eliminates any requirement for vessel operators to time calls, oversee billing, perform service or attempt collec- tion. CallAboard ® will handle all of your cellular communication needs and allow everyone onboard to remain in touch with those ashore!

Oispemini to mix and my! 40 miles of 2 Part ble Calk nere installed on Carnival BoatLIFCs 2 Pin Pobsultide Meier. Mix. and

Cruise Lines narefl ship "MOTASr Unit is used here to lay in the sealant No need to mx pour into cauUong pjns - saving tune and money!

Whether you have a little ship, a ferry ship, a tall ship, a cruise ship, or even a battleship — BoatLIFE® has the answers, products, and equipment to solve your marine sealant problems.