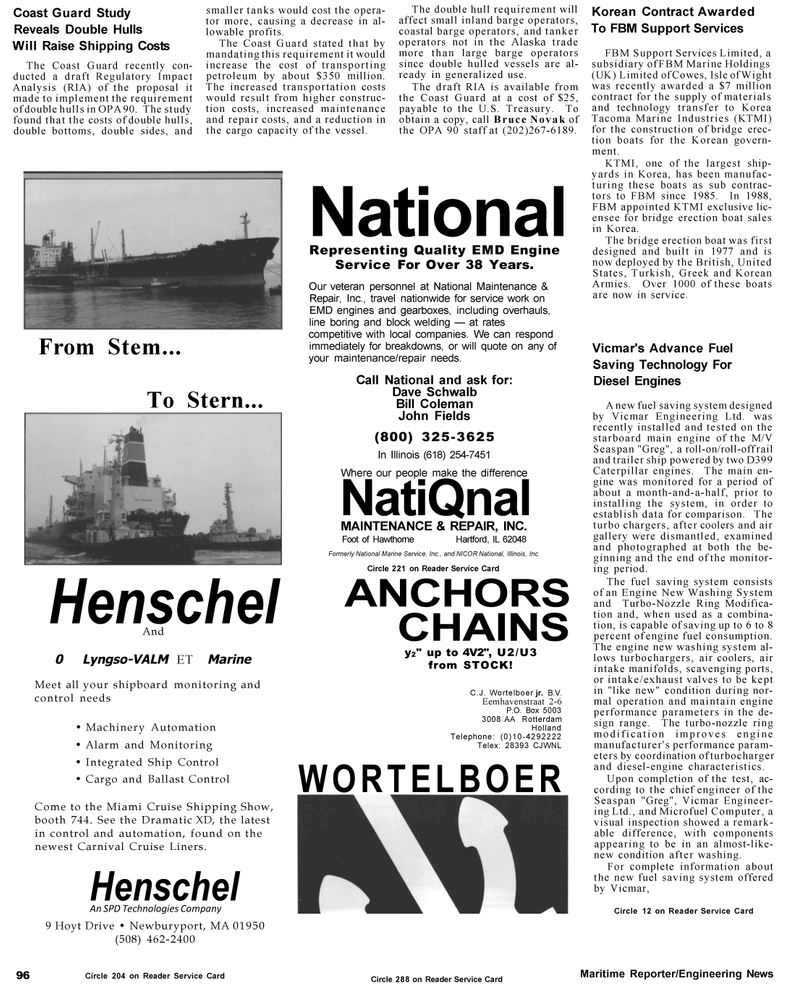 Analysis (RIA) of the proposal it made to implement the requirement of double hulls in OPA 90. The study found that the costs of double hulls, double bottoms, double sides, and smaller tanks would cost the opera- tor more, causing a decrease in al- lowable profits.

The Coast Guard stated that by mandating this requirement it would increase the cost of transporting petroleum by about $350 million.

The increased transportation costs would result from higher construc- tion costs, increased maintenance and repair costs, and a reduction in the cargo capacity of the vessel.

FBM Support Services Limited, a subsidiary of FBM Marine Holdings (UK) Limited of Cowes, Isle of Wight was recently awarded a $7 million contract for the supply of materials and technology transfer to Korea

KTMI, one of the largest ship- yards in Korea, has been manufac- turing these boats as sub contrac- tors to FBM since 1985. In 1988,

The bridge erection boat was first designed and built in 1977 and is now deployed by the British, United

Armies. Over 1000 of these boats are now in service.

A new fuel saving system designed by Vicmar Engineering Ltd. was recently installed and tested on the starboard main engine of the M/V

Caterpillar engines. The main en- gine was monitored for a period of about a month-and-a-half, prior to installing the system, in order to establish data for comparison. The turbo chargers, after coolers and air gallery were dismantled, examined and photographed at both the be- ginning and the end of the monitor- ing period.

The fuel saving system consists of an Engine New Washing System and Turbo-Nozzle Ring Modifica- tion and, when used as a combina- tion, is capable of saving up to 6 to 8 percent of engine fuel consumption.

Upon completion of the test, ac- cording to the chief engineer of the

Seaspan "Greg", Vicmar Engineer- ing Ltd., and Microfuel Computer, a visual inspection showed a remark- able difference, with components appearing to be in an almost-like- new condition after washing.

For complete information about the new fuel saving system offered by Vicmar,

Come to the Miami Cruise Shipping Show, booth 744. See the Dramatic XD, the latest in control and automation, found on the newest Carnival Cruise Liners.

Service For Over 38 Years.

Our veteran personnel at National Maintenance &

EMD engines and gearboxes, including overhauls, line boring and block welding — at rates competitive with local companies. We can respond immediately for breakdowns, or will quote on any of your maintenance/repair needs.

Call National and ask for:

Where our people make the difference NatiQnal