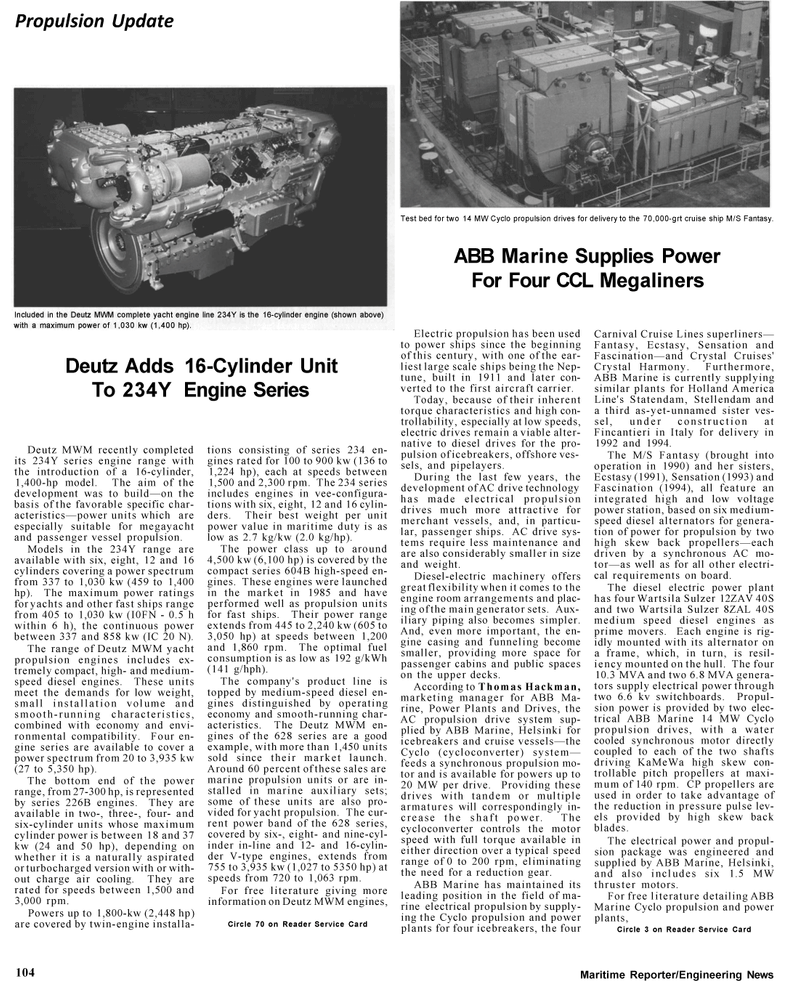 Deutz MWM recently completed its 234Y series engine range with the introduction of a 16-cylinder, 1,400-hp model. The aim of the development was to build—on the basis of the favorable specific char- acteristics—power units which are especially suitable for megayacht and passenger vessel propulsion.

The bottom end of the power range, from 27-300 hp, is represented by series 226B engines. They are available in two-, three-, four- and six-cylinder units whose maximum cylinder power is between 18 and 37 kw (24 and 50 hp), depending on whether it is a naturally aspirated or turbocharged version with or with- out charge air cooling. They are rated for speeds between 1,500 and 3,000 rpm.

The company's product line is topped by medium-speed diesel en- gines distinguished by operating economy and smooth-running char- acteristics. The Deutz MWM en- gines of the 628 series are a good example, with more than 1,450 units sold since their market launch.

Electric propulsion has been used to power ships since the beginning of this century, with one of the ear- liest large scale ships being the Nep- tune, built in 1911 and later con- verted to the first aircraft carrier.

Today, because of their inherent torque characteristics and high con- trollability, especially at low speeds, electric drives remain a viable alter- native to diesel drives for the pro- pulsion of icebreakers, offshore ves- sels, and pipelayers.

During the last few years, the development of AC drive technology has made electrical propulsion drives much more attractive for merchant vessels, and, in particu- lar, passenger ships. AC drive sys- tems require less maintenance and are also considerably smaller in size and weight.

And, even more important, the en- gine casing and funneling become smaller, providing more space for passenger cabins and public spaces on the upper decks.

According to Thomas Hackman, marketing manager for ABB Ma- rine, Power Plants and Drives, the

Cyclo (cycloconverter) system— feeds a synchronous propulsion mo- tor and is available for powers up to 20 MW per drive. Providing these drives with tandem or multiple armatures will correspondingly in- crease the shaft power. The cycloconverter controls the motor speed with full torque available in either direction over a typical speed range of 0 to 200 rpm, eliminating the need for a reduction gear.

ABB Marine has maintained its leading position in the field of ma- rine electrical propulsion by supply- ing the Cyclo propulsion and power plants for four icebreakers, the four

Line's Statendam, Stellendam and a third as-yet-unnamed sister ves- sel, under construction at

The M/S Fantasy (brought into operation in 1990) and her sisters,

Fascination (1994), all feature an integrated high and low voltage power station, based on six medium- speed diesel alternators for genera- tion of power for propulsion by two high skew back propellers—each driven by a synchronous AC mo- tor—as well as for all other electri- cal requirements on board.

Included in the Deutz MWM complete yacht engine line 234Y is the 16-cylinder engine (shown above) with a maximum power of 1,030 kw (1,400 hp). 104 Maritime Reporter/Engineering News