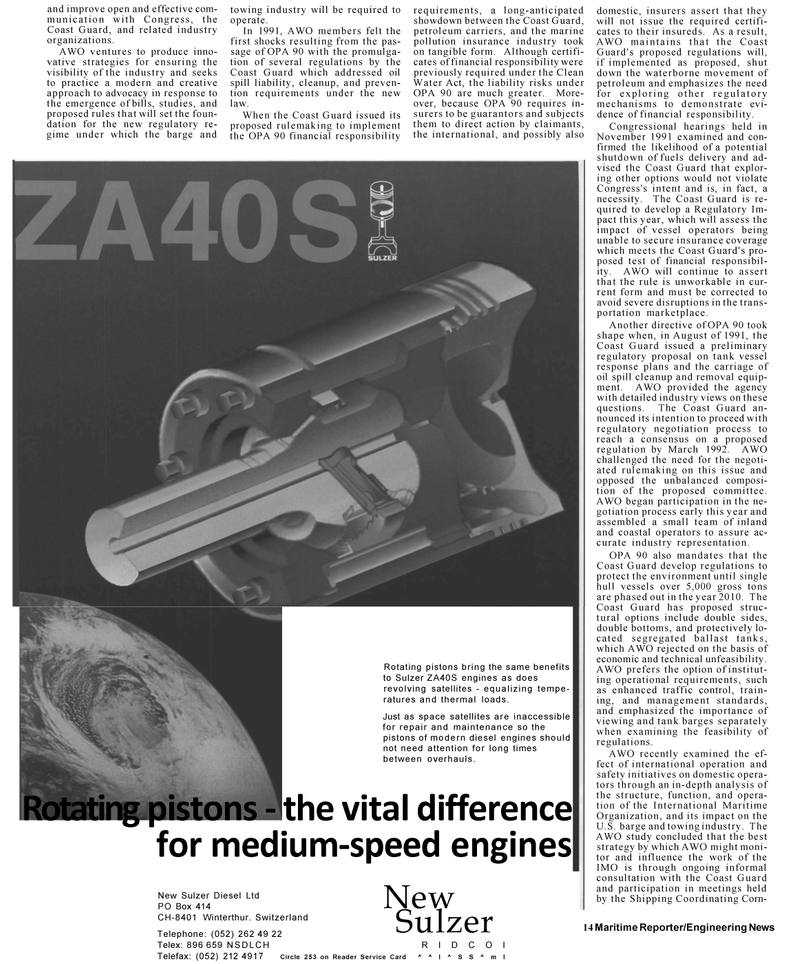 and improve open and effective com- munication with Congress, the

AWO ventures to produce inno- vative strategies for ensuring the visibility of the industry and seeks to practice a modern and creative approach to advocacy in response to the emergence of bills, studies, and proposed rules that will set the foun- dation for the new regulatory re- gime under which the barge and towing industry will be required to operate.

In 1991, AWO members felt the first shocks resulting from the pas- sage of OPA 90 with the promulga- tion of several regulations by the

Water Act, the liability risks under

OPA 90 are much greater. More- over, because OPA 90 requires in- surers to be guarantors and subjects them to direct action by claimants, the international, and possibly also domestic, insurers assert that they will not issue the required certifi- cates to their insureds. As a result,

AWO maintains that the Coast

Guard's proposed regulations will, if implemented as proposed, shut down the waterborne movement of petroleum and emphasizes the need for exploring other regulatory mechanisms to demonstrate evi- dence of financial responsibility.

Congress's intent and is, in fact, a necessity. The Coast Guard is re- quired to develop a Regulatory Im- pact this year, which will assess the impact of vessel operators being unable to secure insurance coverage which meets the Coast Guard's pro- posed test of financial responsibil- ity. AWO will continue to assert that the rule is unworkable in cur- rent form and must be corrected to avoid severe disruptions in the trans- portation marketplace.

Another directive of OPA 90 took shape when, in August of 1991, the

Coast Guard issued a preliminary regulatory proposal on tank vessel response plans and the carriage of oil spill cleanup and removal equip- ment. AWO provided the agency with detailed industry views on these questions. The Coast Guard an- nounced its intention to proceed with regulatory negotiation process to reach a consensus on a proposed regulation by March 1992. AWO challenged the need for the negoti- ated rulemaking on this issue and opposed the unbalanced composi- tion of the proposed committee.

OPA 90 also mandates that the

Coast Guard develop regulations to protect the environment until single hull vessels over 5,000 gross tons are phased out in the year 2010. The

AWO prefers the option of institut- ing operational requirements, such as enhanced traffic control, train- ing, and management standards, and emphasized the importance of viewing and tank barges separately when examining the feasibility of regulations.

AWO recently examined the ef- fect of international operation and safety initiatives on domestic opera- tors through an in-depth analysis of the structure, function, and opera- tion of the International Maritime

Organization, and its impact on the

U.S. barge and towing industry. The

Just as space satellites are inaccessible for repair and maintenance so the pistons of modern diesel engines should not need attention for long times between overhauls.