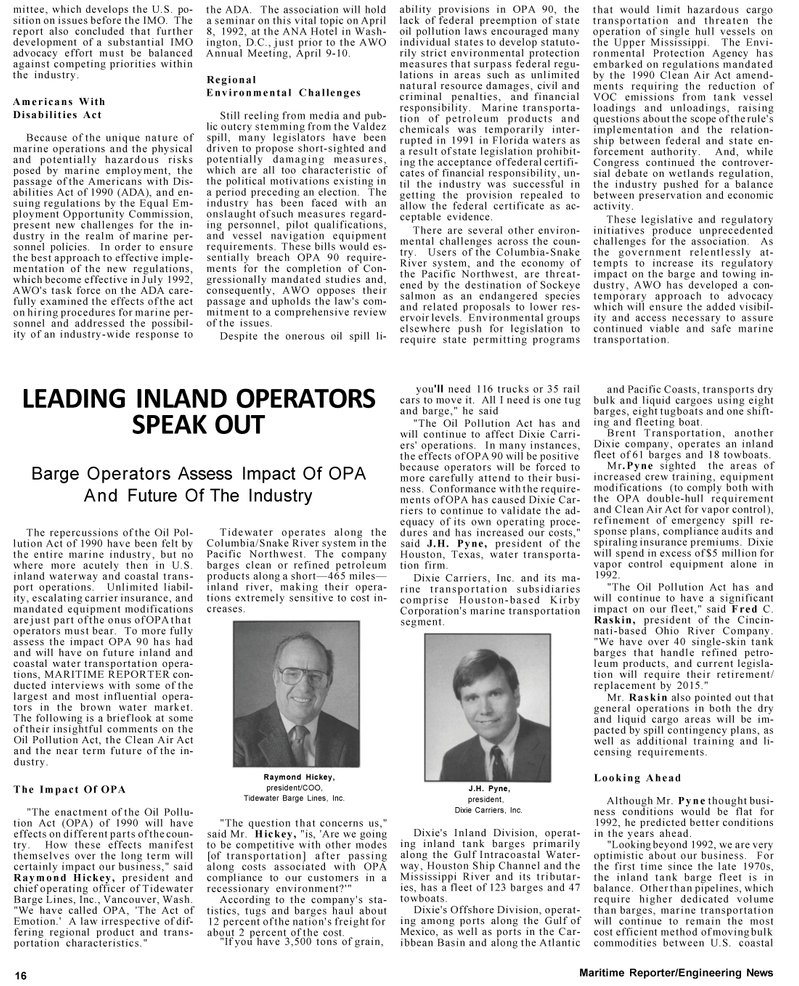 mittee, which develops the U.S. po- sition on issues before the IMO. The report also concluded that further development of a substantial IMO advocacy effort must be balanced against competing priorities within the industry.

Because of the unique nature of marine operations and the physical and potentially hazardous risks posed by marine employment, the passage of the Americans with Dis- abilities Act of 1990 (ADA), and en- suing regulations by the Equal Em- ployment Opportunity Commission, present new challenges for the in- dustry in the realm of marine per- sonnel policies. In order to ensure the best approach to effective imple- mentation of the new regulations, which become effective in July 1992,

AWO's task force on the ADA care- fully examined the effects of the act on hiring procedures for marine per- sonnel and addressed the possibil- ity of an industry-wide response to the ADA. The association will hold a seminar on this vital topic on April 8, 1992, at the ANA Hotel in Wash- ington, D.C., just prior to the AWO

Still reeling from media and pub- lic outcry stemming from the Valdez spill, many legislators have been driven to propose short-sighted and potentially damaging measures, which are all too characteristic of the political motivations existing in a period preceding an election. The industry has been faced with an onslaught of such measures regard- ing personnel, pilot qualifications, and vessel navigation equipment requirements. These bills would es- sentially breach OPA 90 require- ments for the completion of Con- gressionally mandated studies and, consequently, AWO opposes their passage and upholds the law's com- mitment to a comprehensive review of the issues.

Despite the onerous oil spill li- ability provisions in OPA 90, the lack of federal preemption of state oil pollution laws encouraged many individual states to develop statuto- rily strict environmental protection measures that surpass federal regu- lations in areas such as unlimited natural resource damages, civil and criminal penalties, and financial responsibility. Marine transporta- tion of petroleum products and chemicals was temporarily inter- rupted in 1991 in Florida waters as a result of state legislation prohibit- ing the acceptance of federal certifi- cates of financial responsibility, un- til the industry was successful in getting the provision repealed to allow the federal certificate as ac- ceptable evidence.

There are several other environ- mental challenges across the coun- try. Users of the Columbia-Snake

River system, and the economy of the Pacific Northwest, are threat- ened by the destination of Sockeye salmon as an endangered species and related proposals to lower res- ervoir levels. Environmental groups elsewhere push for legislation to require state permitting programs that would limit hazardous cargo transportation and threaten the operation of single hull vessels on the Upper Mississippi. The Envi- ronmental Protection Agency has embarked on regulations mandated by the 1990 Clean Air Act amend- ments requiring the reduction of

VOC emissions from tank vessel loadings and unloadings, raising questions about the scope of the rule's implementation and the relation- ship between federal and state en- forcement authority. And, while

Congress continued the controver- sial debate on wetlands regulation, the industry pushed for a balance between preservation and economic activity.

These legislative and regulatory initiatives produce unprecedented challenges for the association. As the government relentlessly at- tempts to increase its regulatory impact on the barge and towing in- dustry, AWO has developed a con- temporary approach to advocacy which will ensure the added visibil- ity and access necessary to assure continued viable and safe marine transportation.

And Future Of The Industry

The repercussions of the Oil Pol- lution Act of 1990 have been felt by the entire marine industry, but no where more acutely then in U.S. inland waterway and coastal trans- port operations. Unlimited liabil- ity, escalating carrier insurance, and mandated equipment modifications are just part of the onus of OPA that operators must bear. To more fully assess the impact OPA 90 has had and will have on future inland and coastal water transportation opera- tions, MARITIME REPORTER con- ducted interviews with some of the largest and most influential opera- tors in the brown water market.

Oil Pollution Act, the Clean Air Act and the near term future of the in- dustry.

The Impact Of OPA "The enactment of the Oil Pollu- tion Act (OPA) of 1990 will have effects on different parts of the coun- try. How these effects manifest themselves over the long term will certainly impact our business," said

Barge Lines, Inc., Vancouver, Wash. "We have called OPA, 'The Act of

Tidewater operates along the

Columbia/Snake River system in the

Tidewater Barge Lines, Inc. "The question that concerns us," said Mr. Hickey, "is, 'Are we going to be competitive with other modes [of transportation] after passing along costs associated with OPA compliance to our customers in a recessionary environment?'"

According to the company's sta- tistics, tugs and barges haul about 12 percent of the nation's freight for about 2 percent of the cost. "If you have 3,500 tons of grain, you'll need 116 trucks or 35 rail cars to move it. All I need is one tug and barge," he said "The Oil Pollution Act has and will continue to affect Dixie Carri- ers' operations. In many instances, the effects of OPA 90 will be positive because operators will be forced to more carefully attend to their busi- ness. Conformance with the require- ments of OPA has caused Dixie Car- riers to continue to validate the ad- equacy of its own operating proce- dures and has increased our costs," said J.H. Pyne, president of the

Mississippi River and its tributar- ies, has a fleet of 123 barges and 47 towboats.

Dixie's Offshore Division, operat- ing among ports along the Gulf of

Mexico, as well as ports in the Car- ibbean Basin and along the Atlantic and Pacific Coasts, transports dry bulk and liquid cargoes using eight barges, eight tugboats and one shift- ing and fleeting boat.

Dixie company, operates an inland fleet of 61 barges and 18 towboats.

Mr.Pyne sighted the areas of increased crew training, equipment modifications (to comply both with the OPA double-hull requirement and Clean Air Act for vapor control), refinement of emergency spill re- sponse plans, compliance audits and spiraling insurance premiums. Dixie will spend in excess of $5 million for vapor control equipment alone in 1992. "The Oil Pollution Act has and will continue to have a significant impact on our fleet," said Fred C.

Raskin, president of the Cincin- nati-based Ohio River Company. "We have over 40 single-skin tank barges that handle refined petro- leum products, and current legisla- tion will require their retirement/ replacement by 2015."

Mr. Raskin also pointed out that general operations in both the dry and liquid cargo areas will be im- pacted by spill contingency plans, as well as additional training and li- censing requirements.

Although Mr. Pyne thought busi- ness conditions would be flat for 1992, he predicted better conditions in the years ahead. "Looking beyond 1992, we are very optimistic about our business. For the first time since the late 1970s, the inland tank barge fleet is in balance. Other than pipelines, which require higher dedicated volume than barges, marine transportation will continue to remain the most cost efficient method of moving bulk commodities between U.S. coastal 16 Maritime Reporter/Engineering News