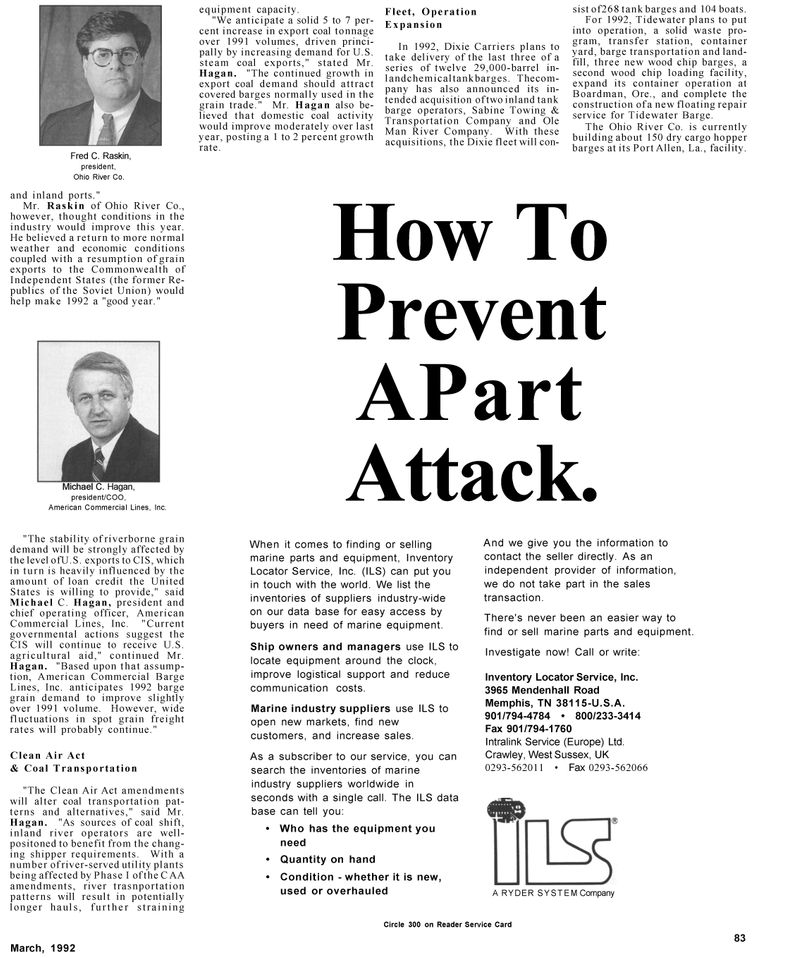 Mr. Raskin of Ohio River Co., however, thought conditions in the industry would improve this year.

Independent States (the former Re- publics of the Soviet Union) would help make 1992 a "good year." "The stability of riverborne grain demand will be strongly affected by the level ofU.S. exports to CIS, which in turn is heavily influenced by the amount of loan credit the United

States is willing to provide," said

Hagan. "Based upon that assump- tion, American Commercial Barge

Hagan. "As sources of coal shift, inland river operators are well- positoned to benefit from the chang- ing shipper requirements. With a number of river-served utility plants being affected by Phase I of the C AA amendments, river trasnportation patterns will result in potentially longer hauls, further straining equipment capacity. "We anticipate a solid 5 to 7 per- cent increase in export coal tonnage over 1991 volumes, driven princi- pally by increasing demand for U.S. steam coal exports," stated Mr.

In 1992, Dixie Carriers plans to take delivery of the last three of a series of twelve 29,000-barrel in- landchemicaltankbarges. Thecom- pany has also announced its in- tended acquisition of two inland tank barge operators, Sabine Towing &

Man River Company. With these acquisitions, the Dixie fleet will con- sist of268 tank barges and 104 boats.

Boardman, Ore., and complete the construction of a new floating repair service for Tidewater Barge.

When it comes to finding or selling marine parts and equipment, Inventory

Locator Service, Inc. (ILS) can put you in touch with the world. We list the inventories of suppliers industry-wide on our data base for easy access by buyers in need of marine equipment.

Ship owners and managers use ILS to locate equipment around the clock, improve logistical support and reduce communication costs.

As a subscriber to our service, you can search the inventories of marine industry suppliers worldwide in seconds with a single call. The ILS data base can tell you: • Who has the equipment you need • Quantity on hand • Condition - whether it is new, used or overhauled

And we give you the information to contact the seller directly. As an independent provider of information, we do not take part in the sales transaction.

There's never been an easier way to find or sell marine parts and equipment.