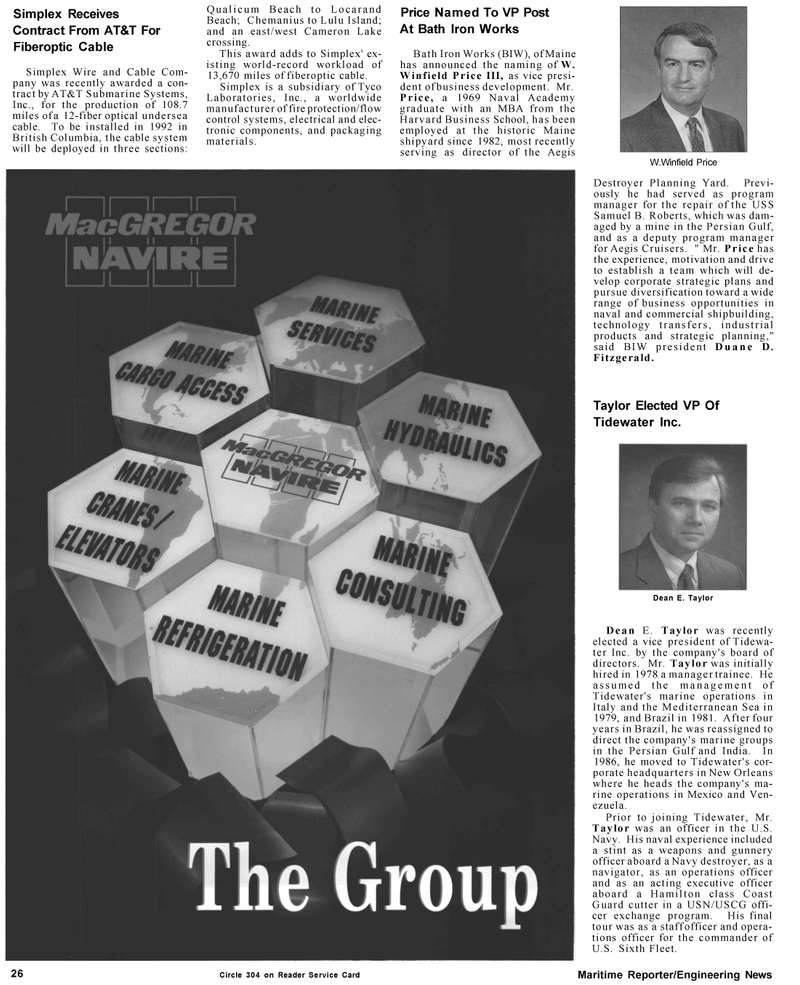 Contract From AT&T For

British Columbia, the cable system will be deployed in three sections:

Simplex is a subsidiary of Tyco

Bath Iron Works (BIW), of Maine has announced the naming of W.

Price, a 1969 Naval Academy graduate with an MBA from the

Harvard Business School, has been employed at the historic Maine shipyard since 1982, most recently serving as director of the Aegis

Destroyer Planning Yard. Previ- ously he had served as program manager for the repair of the USS

Samuel B. Roberts, which was dam- aged by a mine in the Persian Gulf, and as a deputy program manager for Aegis Cruisers. " Mr. Price has the experience, motivation and drive to establish a team which will de- velop corporate strategic plans and pursue diversification toward a wide range of business opportunities in naval and commercial shipbuilding, technology transfers, industrial products and strategic planning," said BIW president Duane D.

Dean E. Taylor was recently elected a vice president of Tidewa- ter Inc. by the company's board of directors. Mr. Taylor was initially hired in 1978 a manager trainee. He assumed the management of

Italy and the Mediterranean Sea in 1979, and Brazil in 1981. After four years in Brazil, he was reassigned to direct the company's marine groups in the Persian Gulf and India. In 1986, he moved to Tidewater's cor- porate headquarters in New Orleans where he heads the company's ma- rine operations in Mexico and Ven- ezuela.

Prior to joining Tidewater, Mr.

Taylor was an officer in the U.S.

Navy. His naval experience included a stint as a weapons and gunnery officer aboard a Navy destroyer, as a navigator, as an operations officer and as an acting executive officer aboard a Hamilton class Coast

Guard cutter in a USN/USCG offi- cer exchange program. His final tour was as a staff officer and opera- tions officer for the commander of