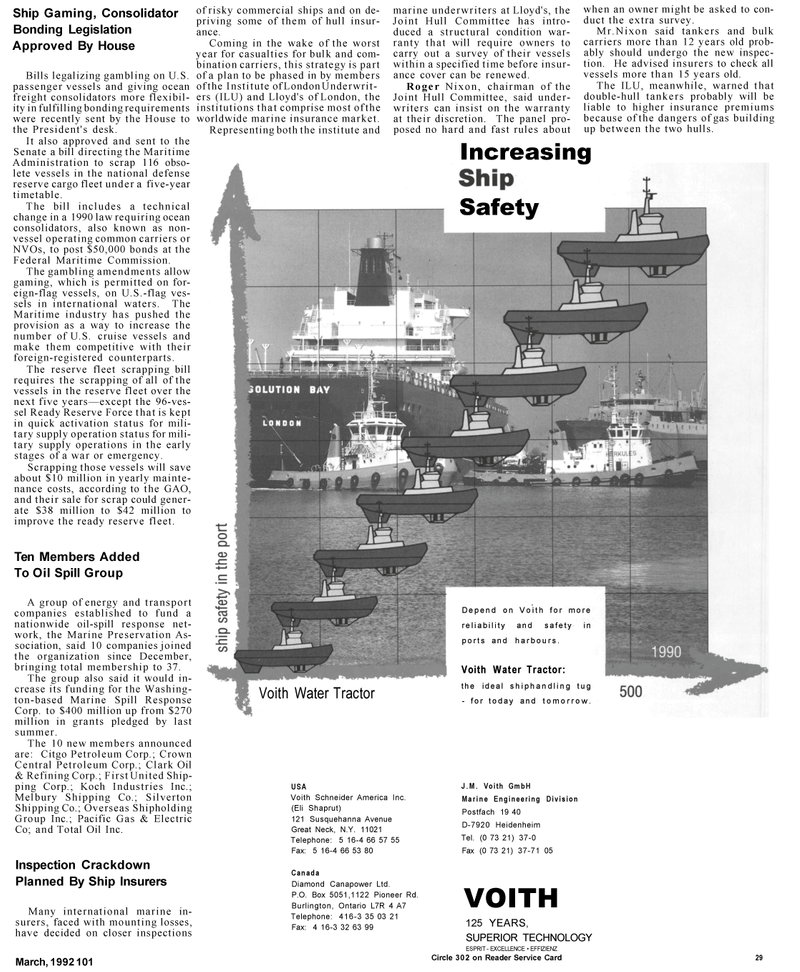 Circle 302 on Reader Service Card 29 marine underwriters at Lloyd's, the

Joint Hull Committee has intro- duced a structural condition war- ranty that will require owners to carry out a survey of their vessels within a specified time before insur- ance cover can be renewed.

Roger Nixon, chairman of the

Joint Hull Committee, said under- writers can insist on the warranty at their discretion. The panel pro- posed no hard and fast rules about

It also approved and sent to the

Senate a bill directing the Maritime

The gambling amendments allow gaming, which is permitted on for- eign-flag vessels, on U.S.-flag ves- sels in international waters. The

Maritime industry has pushed the provision as a way to increase the number of U.S. cruise vessels and make them competitive with their foreign-registered counterparts.

Scrapping those vessels will save about $10 million in yearly mainte- nance costs, according to the GAO, and their sale for scrap could gener- ate $38 million to $42 million to improve the ready reserve fleet.

To Oil Spill Group of risky commercial ships and on de- priving some of them of hull insur- ance.

Coming in the wake of the worst year for casualties for bulk and com- bination carriers, this strategy is part of a plan to be phased in by members of the Institute of London Underwrit- ers (ILU) and Lloyd's of London, the institutions that comprise most of the worldwide marine insurance market.

Representing both the institute and when an owner might be asked to con- duct the extra survey.

The ILU, meanwhile, warned that double-hull tankers probably will be liable to higher insurance premiums because of the dangers of gas building up between the two hulls.

A group of energy and transport companies established to fund a nationwide oil-spill response net- work, the Marine Preservation As- sociation, said 10 companies joined the organization since December, bringing total membership to 37.

Many international marine in- surers, faced with mounting losses, have decided on closer inspections

Depend on Voith for more reliability and safety in ports and harbours.