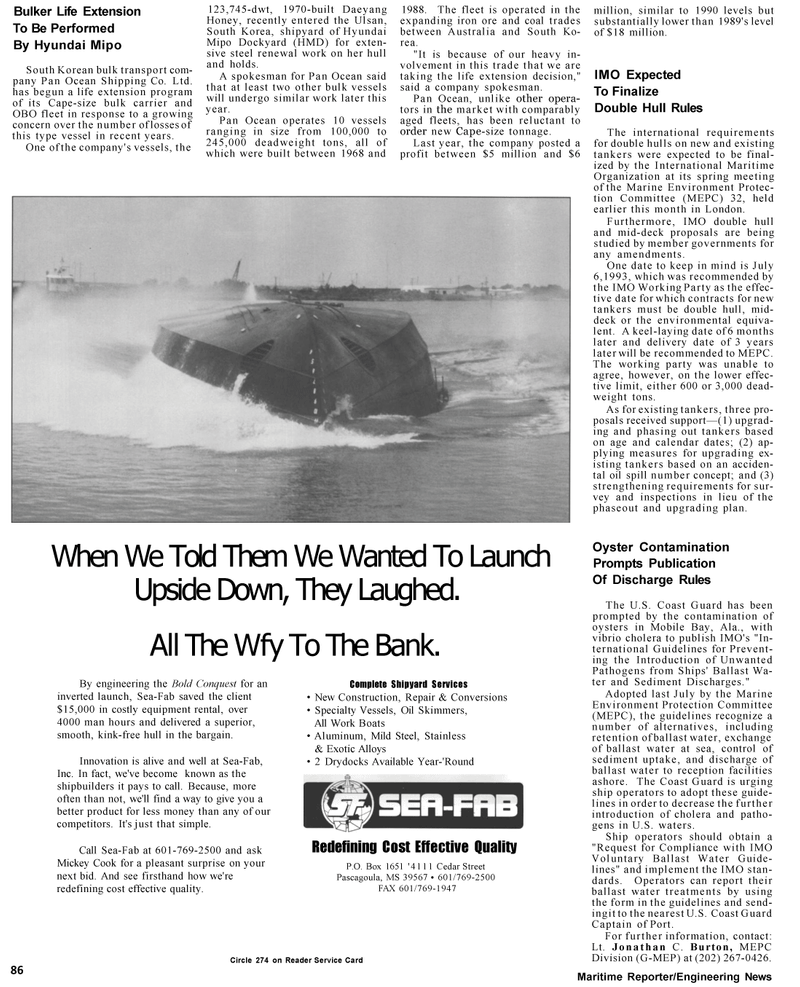 OBO fleet in response to a growing concern over the number of losses of this type vessel in recent years.

A spokesman for Pan Ocean said that at least two other bulk vessels will undergo similar work later this year.

Pan Ocean operates 10 vessels ranging in size from 100,000 to 245,000 deadweight tons, all of which were built between 1968 and 1988. The fleet is operated in the expanding iron ore and coal trades between Australia and South Ko- rea. "It is because of our heavy in- volvement in this trade that we are taking the life extension decision," said a company spokesman.

Pan Ocean, unlike other opera- tors in the market with comparably aged fleets, has been reluctant to order new Cape-size tonnage.

Last year, the company posted a profit between $5 million and $6 million, similar to 1990 levels but substantially lower than 1989's level of $18 million.

Organization at its spring meeting of the Marine Environment Protec- tion Committee (MEPC) 32, held earlier this month in London.

Furthermore, IMO double hull and mid-deck proposals are being studied by member governments for any amendments.

One date to keep in mind is July 6,1993, which was recommended by the IMO Working Party as the effec- tive date for which contracts for new tankers must be double hull, mid- deck or the environmental equiva- lent. A keel-laying date of 6 months later and delivery date of 3 years later will be recommended to MEPC.

The working party was unable to agree, however, on the lower effec- tive limit, either 600 or 3,000 dead- weight tons.

The U.S. Coast Guard has been prompted by the contamination of oysters in Mobile Bay, Ala., with vibrio cholera to publish IMO's "In- ternational Guidelines for Prevent- ing the Introduction of Unwanted

Adopted last July by the Marine

Environment Protection Committee (MEPC), the guidelines recognize a number of alternatives, including retention of ballast water, exchange of ballast water at sea, control of sediment uptake, and discharge of ballast water to reception facilities ashore. The Coast Guard is urging ship operators to adopt these guide- lines in order to decrease the further introduction of cholera and patho- gens in U.S. waters.

Ship operators should obtain a "Request for Compliance with IMO

Voluntary Ballast Water Guide- lines" and implement the IMO stan- dards. Operators can report their ballast water treatments by using the form in the guidelines and send- ingit to the nearest U.S. Coast Guard

When We Told Them We Wanted To Launch

Upside Down, They Laughed.

All The Wfy To The Bank.

By engineering the Bold Conquest for an inverted launch, Sea-Fab saved the client $15,000 in costly equipment rental, over 4000 man hours and delivered a superior, smooth, kink-free hull in the bargain.

Innovation is alive and well at Sea-Fab,

Inc. In fact, we've become known as the shipbuilders it pays to call. Because, more often than not, we'll find a way to give you a better product for less money than any of our competitors. It's just that simple.

Mickey Cook for a pleasant surprise on your next bid. And see firsthand how we're redefining cost effective quality.