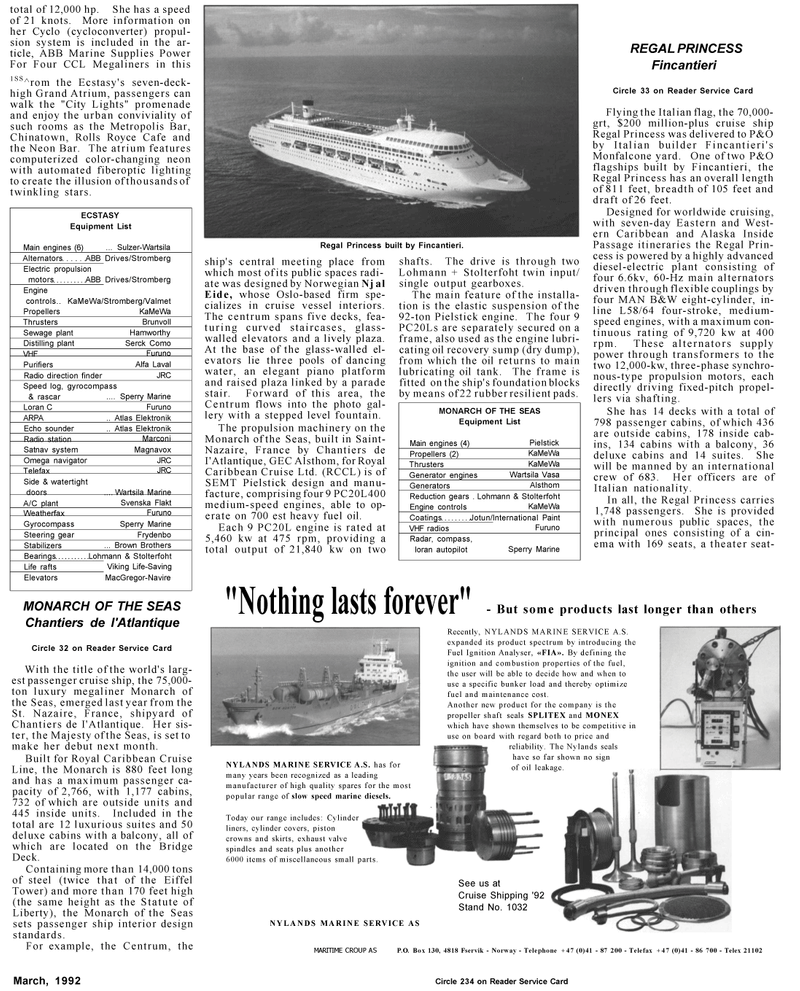 Regal Princess built by Fincantieri. total of 12,000 hp. She has a speed of 21 knots. More information on her Cyclo (cycloconverter) propul- sion system is included in the ar- ticle, ABB Marine Supplies Power

For Four CCL Megaliners in this 1SS^rom the Ecstasy's seven-deck- high Grand Atrium, passengers can walk the "City Lights" promenade and enjoy the urban conviviality of such rooms as the Metropolis Bar,

MONARCH OF THE SEAS

With the title of the world's larg- est passenger cruise ship, the 75,000- ton luxury megaliner Monarch of the Seas, emerged last year from the

Chantiers de I'Atlantique. Her sis- ter, the Majesty of the Seas, is set to make her debut next month.

Line, the Monarch is 880 feet long and has a maximum passenger ca- pacity of 2,766, with 1,177 cabins, 732 of which are outside units and 445 inside units. Included in the total are 12 luxurious suites and 50 deluxe cabins with a balcony, all of which are located on the Bridge

Containing more than 14,000 tons of steel (twice that of the Eiffel

For example, the Centrum, the ship's central meeting place from which most of its public spaces radi- ate was designed by Norwegian Nj al

At the base of the glass-walled el- evators lie three pools of dancing water, an elegant piano platform and raised plaza linked by a parade stair. Forward of this area, the

Centrum flows into the photo gal- lery with a stepped level fountain.

The propulsion machinery on the

Monarch of the Seas, built in Saint-

Caribbean Cruise Ltd. (RCCL) is of

The main feature of the installa- tion is the elastic suspension of the 92-ton Pielstick engine. The four 9

PC20Ls are separately secured on a frame, also used as the engine lubri- cating oil recovery sump (dry dump), from which the oil returns to main lubricating oil tank. The frame is fitted on the ship's foundation blocks by means of 22 rubber resilient pads.

MONARCH OF THE SEAS

Regal Princess was delivered to P&O by Italian builder Fincantieri's

Monfalcone yard. One of two P&O flagships built by Fincantieri, the

Regal Princess has an overall length of 811 feet, breadth of 105 feet and draft of 26 feet.

Designed for worldwide cruising, with seven-day Eastern and West- ern Caribbean and Alaska Inside

In all, the Regal Princess carries 1,748 passengers. She is provided with numerous public spaces, the principal ones consisting of a cin- ema with 169 seats, a theater seat- "Nothing lasts forever" - But some products last longer than others

NYLANDS MARINE SERVICE A.S. has for many years been recognized as a leading manufacturer of high quality spares for the most popular range of slow speed marine diesels.

Fuel Ignition Analyser, «FIA». By defining the ignition and combustion properties of the fuel, the user will be able to decide how and when to use a specific bunker load and thereby optimize fuel and maintenance cost.

Another new product for the company is the propeller shaft seals SPLITEX and MONEX which have shown themselves to be competitive in use on board with regard both to price and reliability. The Nylands seals have so far shown no sign of oil leakage.