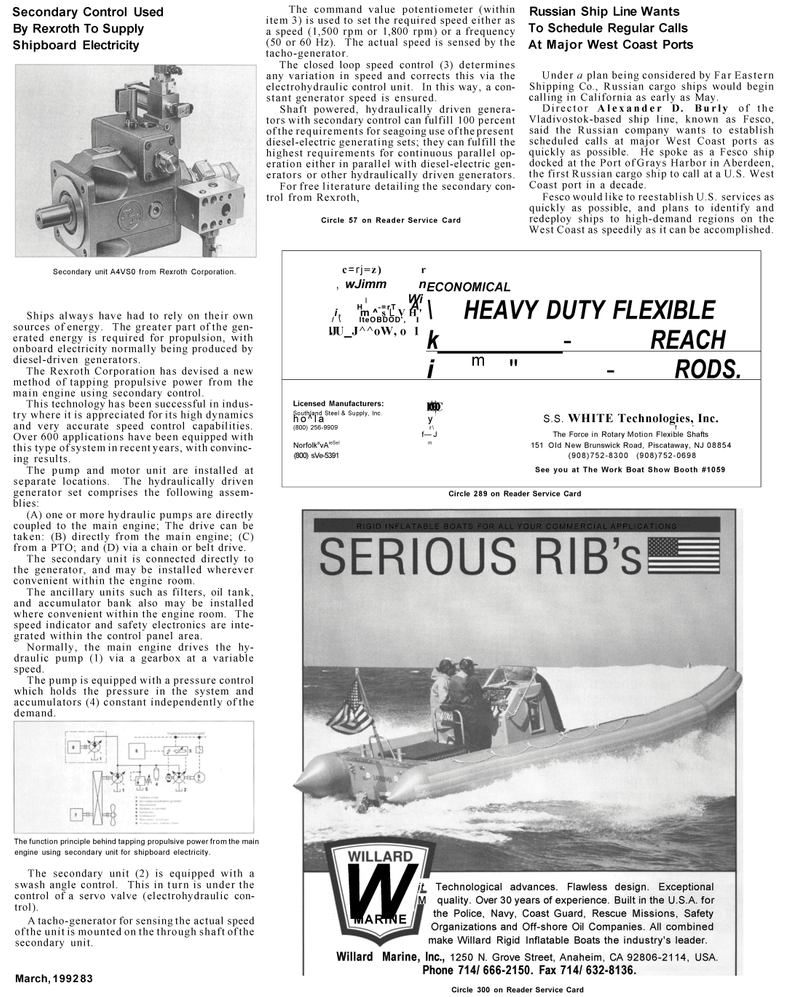 By Rexroth To Supply

Ships always have had to rely on their own sources of energy. The greater part of the gen- erated energy is required for propulsion, with onboard electricity normally being produced by diesel-driven generators.

The Rexroth Corporation has devised a new method of tapping propulsive power from the main engine using secondary control.

This technology has been successful in indus- try where it is appreciated for its high dynamics and very accurate speed control capabilities.

Over 600 applications have been equipped with this type of system in recent years, with convinc- ing results.

The pump and motor unit are installed at separate locations. The hydraulically driven generator set comprises the following assem- blies: (A) one or more hydraulic pumps are directly coupled to the main engine; The drive can be taken: (B) directly from the main engine; (C) from a PTO; and (D) via a chain or belt drive.

The secondary unit is connected directly to the generator, and may be installed wherever convenient within the engine room.

The ancillary units such as filters, oil tank, and accumulator bank also may be installed where convenient within the engine room. The speed indicator and safety electronics are inte- grated within the control panel area.

Normally, the main engine drives the hy- draulic pump (1) via a gearbox at a variable speed.

The pump is equipped with a pressure control which holds the pressure in the system and accumulators (4) constant independently of the demand.

The command value potentiometer (within item 3) is used to set the required speed either as a speed (1,500 rpm or 1,800 rpm) or a frequency (50 or 60 Hz). The actual speed is sensed by the tacho-generator.

The closed loop speed control (3) determines any variation in speed and corrects this via the electrohydraulic control unit. In this way, a con- stant generator speed is ensured.

Shaft powered, hydraulically driven genera- tors with secondary control can fulfill 100 percent of the requirements for seagoing use of the present diesel-electric generating sets; they can fulfill the highest requirements for continuous parallel op- eration either in parallel with diesel-electric gen- erators or other hydraulically driven generators.

For free literature detailing the secondary con- trol from Rexroth,

Under a plan being considered by Far Eastern

Shipping Co., Russian cargo ships would begin calling in California as early as May.

Director Alexander D. Burly of the

Vladivostok-based ship line, known as Fesco, said the Russian company wants to establish scheduled calls at major West Coast ports as quickly as possible. He spoke as a Fesco ship docked at the Port of Grays Harbor in Aberdeen, the first Russian cargo ship to call at a U.S. West

Coast port in a decade.

Fesco would like to reestablish U.S. services as quickly as possible, and plans to identify and redeploy ships to high-demand regions on the

West Coast as speedily as it can be accomplished. c=rj=z) r , wJimm n

The secondary unit (2) is equipped with a swash angle control. This in turn is under the control of a servo valve (electrohydraulic con- trol).

A tacho-generator for sensing the actual speed of the unit is mounted on the through shaft of the secondary unit.

RIGID INFLATABLE BOATS FOR ALL YOUR COMMERCIAL APPLICATIONS

M quality. Over 30 years of experience. Built in the U.S.A. for the Police, Navy, Coast Guard, Rescue Missions, Safety