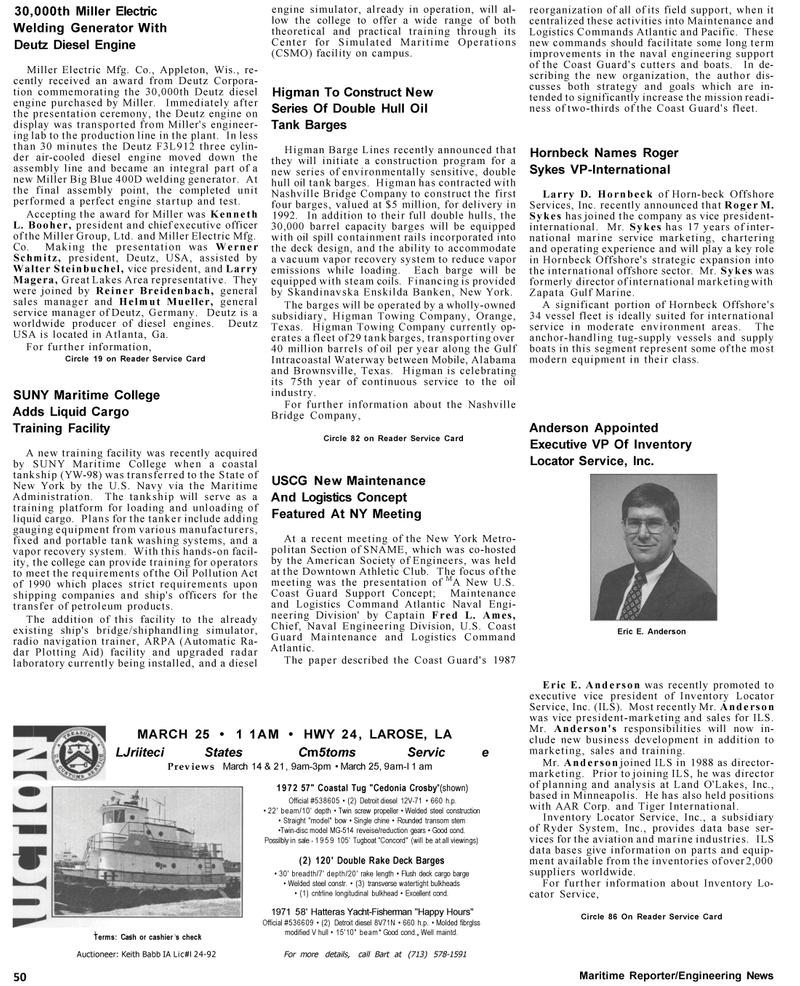 Miller Electric Mfg. Co., Appleton, Wis., re- cently received an award from Deutz Corpora- tion commemorating the 30,000th Deutz diesel engine purchased by Miller. Immediately after the presentation ceremony, the Deutz engine on display was transported from Miller's engineer- ing lab to the production line in the plant. In less than 30 minutes the Deutz F3L912 three cylin- der air-cooled diesel engine moved down the assembly line and became an integral part of a new Miller Big Blue 400D welding generator. At the final assembly point, the completed unit performed a perfect engine startup and test.

Accepting the award for Miller was Kenneth

Co. Making the presentation was Werner

USA is located in Atlanta, Ga.

New York by the U.S. Navy via the Maritime

Administration. The tankship will serve as a training platform for loading and unloading of liquid cargo. Plans for the tanker include adding gauging equipment from various manufacturers, fixed and portable tank washing systems, and a vapor recovery system. With this hands-on facil- ity, the college can provide training for operators to meet the requirements of the Oil Pollution Act of 1990 which places strict requirements upon shipping companies and ship's officers for the transfer of petroleum products.

The addition of this facility to the already existing ship's bridge/shiphandling simulator, radio navigation trainer, ARPA (Automatic Ra- dar Plotting Aid) facility and upgraded radar laboratory currently being installed, and a diesel engine simulator, already in operation, will al- low the college to offer a wide range of both theoretical and practical training through its

Higman Barge Lines recently announced that they will initiate a construction program for a new series of environmentally sensitive, double hull oil tank barges. Higman has contracted with

Nashville Bridge Company to construct the first four barges, valued at $5 million, for delivery in 1992. In addition to their full double hulls, the 30,000 barrel capacity barges will be equipped with oil spill containment rails incorporated into the deck design, and the ability to accommodate a vacuum vapor recovery system to reduce vapor emissions while loading. Each barge will be equipped with steam coils. Financing is provided by Skandinavska Enskilda Banken, New York.

The barges will be operated by a wholly-owned subsidiary, Higman Towing Company, Orange,

Texas. Higman Towing Company currently op- erates a fleet of 29 tank barges, transporting over 40 million barrels of oil per year along the Gulf

Intracoastal Waterway between Mobile, Alabama and Brownsville, Texas. Higman is celebrating its 75th year of continuous service to the oil industry.

For further information about the Nashville

At a recent meeting of the New York Metro- politan Section of SNAME, which was co-hosted by the American Society of Engineers, was held at the Downtown Athletic Club. The focus of the meeting was the presentation of MA New U.S.

The paper described the Coast Guard's 1987 reorganization of all of its field support, when it centralized these activities into Maintenance and

Logistics Commands Atlantic and Pacific. These new commands should facilitate some long term improvements in the naval engineering support of the Coast Guard's cutters and boats. In de- scribing the new organization, the author dis- cusses both strategy and goals which are in- tended to significantly increase the mission readi- ness of two-thirds of the Coast Guard's fleet.

A significant portion of Hornbeck Offshore's 34 vessel fleet is ideally suited for international service in moderate environment areas. The anchor-handling tug-supply vessels and supply boats in this segment represent some of the most modern equipment in their class.

Mr. Anderson joined ILS in 1988 as director- marketing. Prior to joining ILS, he was director of planning and analysis at Land O'Lakes, Inc., based in Minneapolis. He has also held positions with AAR Corp. and Tiger International.

Inventory Locator Service, Inc., a subsidiary of Ryder System, Inc., provides data base ser- vices for the aviation and marine industries. ILS data bases give information on parts and equip- ment available from the inventories of over 2,000 suppliers worldwide.