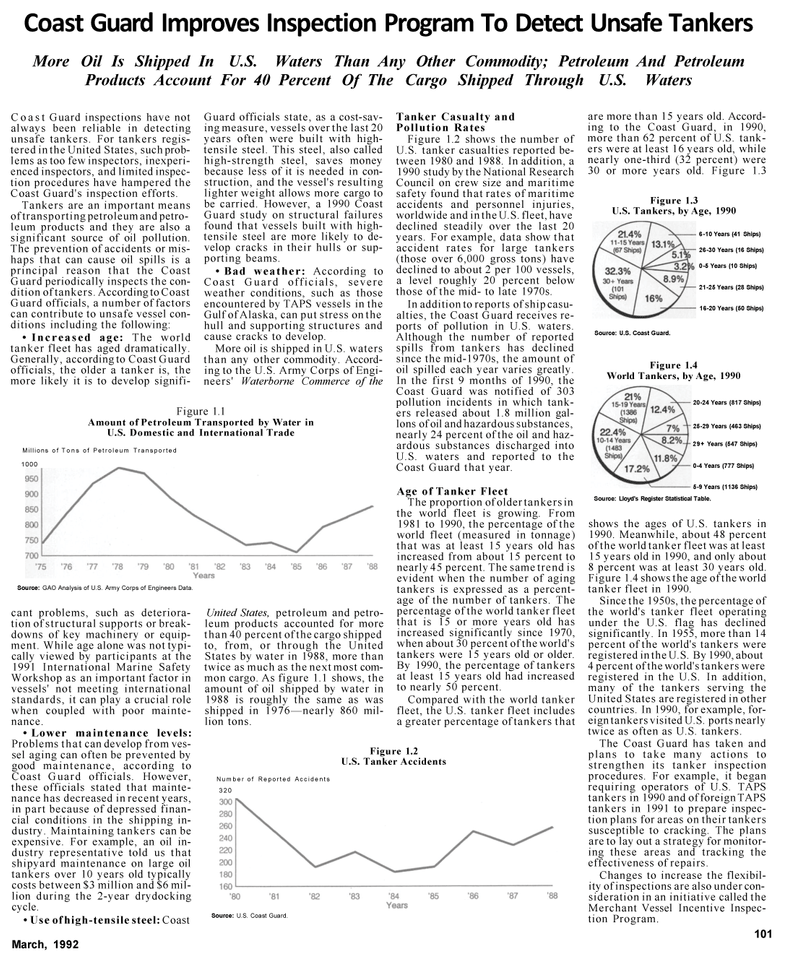 More Oil Is Shipped In U.S. Waters Than Any Other Commodity; Petroleum And Petroleum

Products Account For 40 Percent Of The Cargo Shipped Through U.S. Waters

Coast Guard inspections have not always been reliable in detecting unsafe tankers. For tankers regis- tered in the United States, such prob- lems as too few inspectors, inexperi- enced inspectors, and limited inspec- tion procedures have hampered the

Tankers are an important means of transporting petroleum and petro- leum products and they are also a significant source of oil pollution.

Guard periodically inspects the con- dition of tankers. According to Coast

Guard officials, a number of factors can contribute to unsafe vessel con- ditions including the following: • Increased age: The world tanker fleet has aged dramatically.

Generally, according to Coast Guard officials, the older a tanker is, the more likely it is to develop signifi-

Guard officials state, as a cost-sav- ing measure, vessels over the last 20 years often were built with high- tensile steel. This steel, also called high-strength steel, saves money because less of it is needed in con- struction, and the vessel's resulting lighter weight allows more cargo to be carried. However, a 1990 Coast

Guard study on structural failures found that vessels built with high- tensile steel are more likely to de- velop cracks in their hulls or sup- porting beams. • Bad weather: According to

Coast Guard officials, severe weather conditions, such as those encountered by TAPS vessels in the

Gulf of Alaska, can put stress on the hull and supporting structures and cause cracks to develop.

More oil is shipped in U.S. waters than any other commodity. Accord- ing to the U.S. Army Corps of Engi- neers' Waterborne Commerce of the

Amount of Petroleum Transported by Water in

Millions of Tons of Petroleum Transported 1000

Source: GAO Analysis of U.S. Army Corps of Engineers Data. cant problems, such as deteriora- tion of structural supports or break- downs of key machinery or equip- ment. While age alone was not typi- cally viewed by participants at the 1991 International Marine Safety

Workshop as an important factor in vessels' not meeting international standards, it can play a crucial role when coupled with poor mainte- nance. • Lower maintenance levels:

Problems that can develop from ves- sel aging can often be prevented by good maintenance, according to

Coast Guard officials. However, these officials stated that mainte- nance has decreased in recent years, in part because of depressed finan- cial conditions in the shipping in- dustry. Maintaining tankers can be expensive. For example, an oil in- dustry representative told us that shipyard maintenance on large oil tankers over 10 years old typically costs between $3 million and $6 mil- lion during the 2-year drydocking cycle. • Use of high-tensile steel: Coast

United States, petroleum and petro- leum products accounted for more than 40 percent of the cargo shipped to, from, or through the United

Figure 1.2 shows the number of

Council on crew size and maritime safety found that rates of maritime accidents and personnel injuries, worldwide and in the U.S. fleet, have declined steadily over the last 20 years. For example, data show that accident rates for large tankers (those over 6,000 gross tons) have declined to about 2 per 100 vessels, a level roughly 20 percent below those of the mid- to late 1970s.

In addition to reports of ship casu- alties, the Coast Guard receives re- ports of pollution in U.S. waters.

Although the number of reported spills from tankers has declined since the mid-1970s, the amount of oil spilled each year varies greatly.

U.S. waters and reported to the

By 1990, the percentage of tankers at least 15 years old had increased to nearly 50 percent.

Compared with the world tanker fleet, the U.S. tanker fleet includes a greater percentage of tankers that

United States are registered in other countries. In 1990, for example, for- eign tankers visited U.S. ports nearly twice as often as U.S. tankers.

The Coast Guard has taken and plans to take many actions to strengthen its tanker inspection procedures. For example, it began requiring operators of U.S. TAPS tankers in 1990 and of foreign TAPS tankers in 1991 to prepare inspec- tion plans for areas on their tankers susceptible to cracking. The plans are to lay out a strategy for monitor- ing these areas and tracking the effectiveness of repairs.