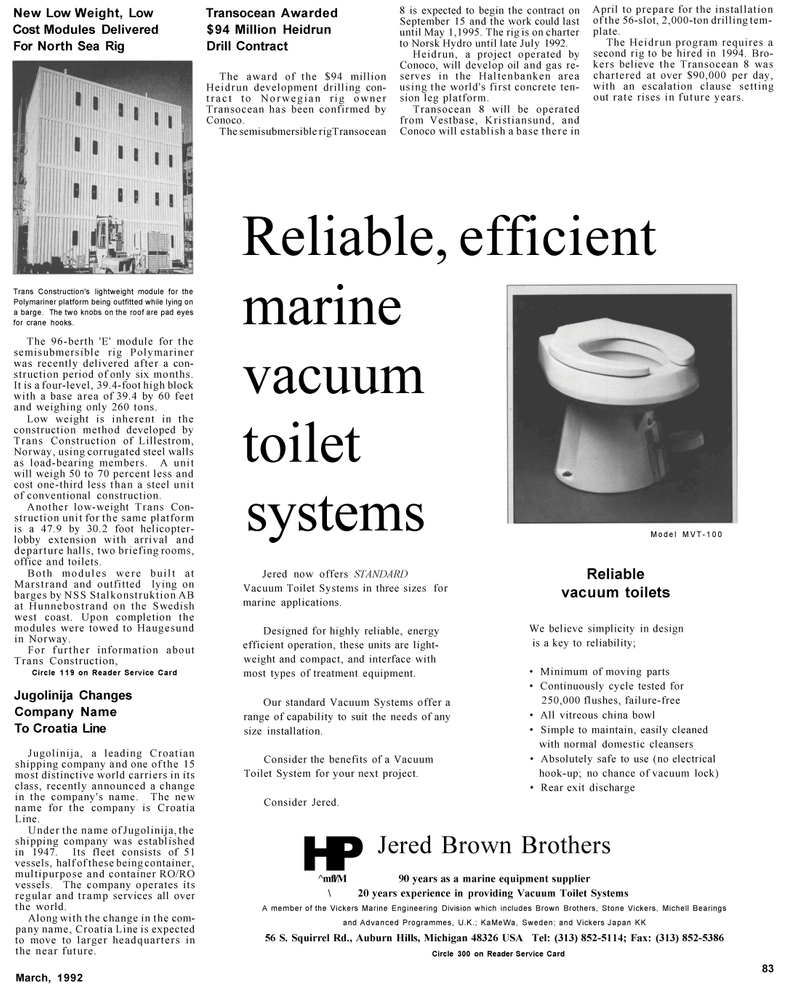 Trans Construction's lightweight module for the

Polymariner platform being outfitted while lying on a barge. The two knobs on the roof are pad eyes for crane hooks.

The 96-berth 'E' module for the semisubmersible rig Polymariner was recently delivered after a con- struction period of only six months.

Low weight is inherent in the construction method developed by

Norway, using corrugated steel walls as load-bearing members. A unit will weigh 50 to 70 percent less and cost one-third less than a steel unit of conventional construction.

Another low-weight Trans Con- struction unit for the same platform is a 47.9 by 30.2 foot helicopter- lobby extension with arrival and departure halls, two briefing rooms, office and toilets.

Both modules were built at

Marstrand and outfitted lying on barges by NSS Stalkonstruktion AB at Hunnebostrand on the Swedish west coast. Upon completion the modules were towed to Haugesund in Norway.

For further information about

Jugolinija, a leading Croatian shipping company and one of the 15 most distinctive world carriers in its class, recently announced a change in the company's name. The new name for the company is Croatia

Under the name of Jugolinija, the shipping company was established in 1947. Its fleet consists of 51 vessels, half of these being container, multipurpose and container RO/RO vessels. The company operates its regular and tramp services all over the world.

Along with the change in the com- pany name, Croatia Line is expected to move to larger headquarters in the near future.

The award of the $94 million

Transocean has been confirmed by

The semisubmersible rigTransocean 8 is expected to begin the contract on

Heidrun, a project operated by

Transocean 8 will be operated from Vestbase, Kristiansund, and

Conoco will establish a base there in

April to prepare for the installation of the 56-slot, 2,000-ton drilling tem- plate.

The Heidrun program requires a second rig to be hired in 1994. Bro- kers believe the Transocean 8 was chartered at over $90,000 per day, with an escalation clause setting out rate rises in future years.

Designed for highly reliable, energy efficient operation, these units are light- weight and compact, and interface with most types of treatment equipment.

Our standard Vacuum Systems offer a range of capability to suit the needs of any size installation.

Consider the benefits of a Vacuum

Toilet System for your next project.

We believe simplicity in design is a key to reliability; • Minimum of moving parts • Continuously cycle tested for 250,000 flushes, failure-free • All vitreous china bowl • Simple to maintain, easily cleaned with normal domestic cleansers • Absolutely safe to use (no electrical hook-up; no chance of vacuum lock) • Rear exit discharge