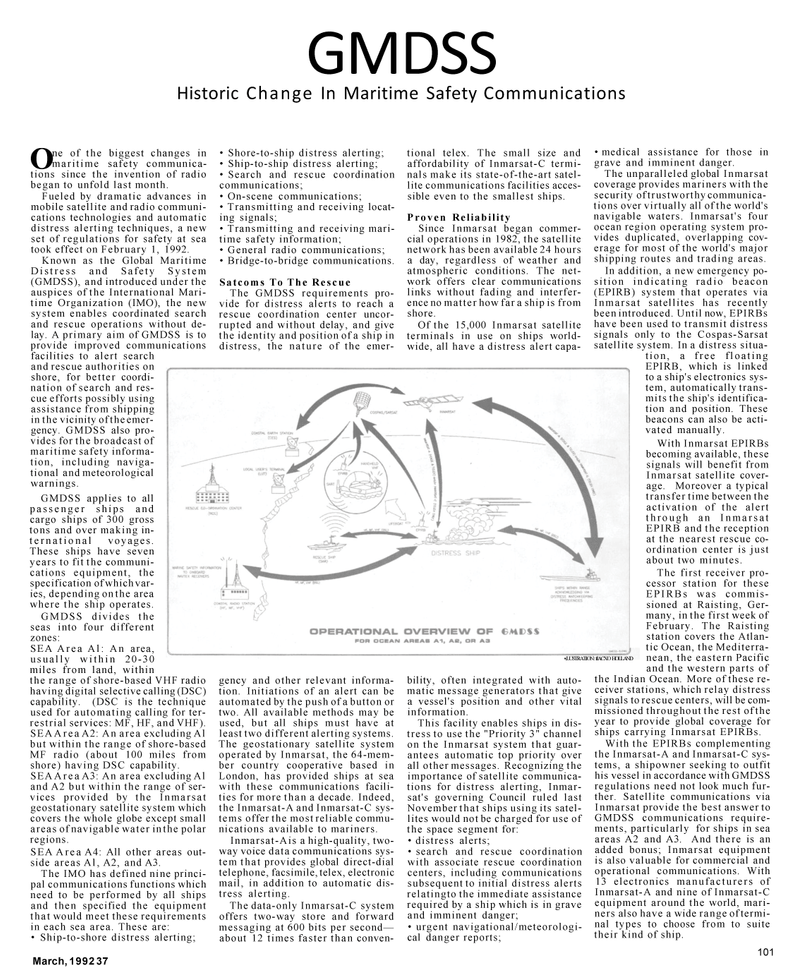 One of the biggest changes in maritime safety communica-tions since the invention of radio began to unfold last month.

Fueled by dramatic advances in mobile satellite and radio communi- cations technologies and automatic distress alerting techniques, a new set of regulations for safety at sea took effect on February 1, 1992.

Known as the Global Maritime

Distress and Safety System (GMDSS), and introduced under the auspices of the International Mari- time Organization (IMO), the new system enables coordinated search and rescue operations without de- lay. A primary aim of GMDSS is to provide improved communications facilities to alert search and rescue authorities on shore, for better coordi- nation of search and res- cue efforts possibly using assistance from shipping in the vicinity of the emer- gency. GMDSS also pro- vides for the broadcast of maritime safety informa- tion, including naviga- tional and meteorological warnings.

GMDSS applies to all passenger ships and cargo ships of 300 gross tons and over making in- ternational voyages.

These ships have seven years to fit the communi- cations equipment, the specification of which var- ies, depending on the area where the ship operates.

SEA Area Al: An area, usually within 20-30 miles from land, within the range of shore-based VHF radio having digital selective calling (DSC) capability. (DSC is the technique used for automating calling for ter- restrial services: MF, HF, and VHF).

SEA Area A2: An area excluding Al but within the range of shore-based

MF radio (about 100 miles from shore) having DSC capability.

SEA Area A3: An area excluding Al and A2 but within the range of ser- vices provided by the Inmarsat geostationary satellite system which covers the whole globe except small areas of navigable water in the polar regions.

Satcoms To The Rescue

The GMDSS requirements pro- vide for distress alerts to reach a rescue coordination center uncor- rupted and without delay, and give the identity and position of a ship in distress, the nature of the emer- tional telex. The small size and affordability of Inmarsat-C termi- nals make its state-of-the-art satel- lite communications facilities acces- sible even to the smallest ships.

Since Inmarsat began commer- cial operations in 1982, the satellite network has been available 24 hours a day, regardless of weather and atmospheric conditions. The net- work offers clear communications links without fading and interfer- ence no matter how far a ship is from shore.

Of the 15,000 Inmarsat satellite terminals in use on ships world- wide, all have a distress alert capa- gency and other relevant informa- tion. Initiations of an alert can be automated by the push of a button or two. All available methods may be used, but all ships must have at least two different alerting systems.

The geostationary satellite system operated by Inmarsat, the 64-mem- ber country cooperative based in

London, has provided ships at sea with these communications facili- ties for more than a decade. Indeed, the Inmarsat-A and Inmarsat-C sys- tems offer the most reliable commu- nications available to mariners.

The data-only Inmarsat-C system offers two-way store and forward messaging at 600 bits per second— about 12 times faster than conven- bility, often integrated with auto- matic message generators that give a vessel's position and other vital information.

This facility enables ships in dis- tress to use the "Priority 3" channel on the Inmarsat system that guar- antees automatic top priority over all other messages. Recognizing the importance of satellite communica- tions for distress alerting, Inmar- sat's governing Council ruled last

November that ships using its satel- lites would not be charged for use of the space segment for: • distress alerts; • search and rescue coordination with associate rescue coordination centers, including communications subsequent to initial distress alerts relatingto the immediate assistance required by a ship which is in grave and imminent danger; • urgent navigational/meteorologi- cal danger reports; • medical assistance for those in grave and imminent danger.

Inmarsat satellites has recently been introduced. Until now, EPIRBs have been used to transmit distress signals only to the Cospas-Sarsat satellite system. In a distress situa- tion, a free floating

EPIRB, which is linked to a ship's electronics sys- tem, automatically trans- mits the ship's identifica- tion and position. These beacons can also be acti- vated manually.

With Inmarsat EPIRBs becoming available, these signals will benefit from

Inmarsat satellite cover- age. Moreover a typical transfer time between the activation of the alert through an Inmarsat

EPIRB and the reception at the nearest rescue co- ordination center is just about two minutes.

The first receiver pro- cessor station for these

EPIRBs was commis- sioned at Raisting, Ger- many, in the first week of

February. The Raisting station covers the Atlan- tic Ocean, the Mediterra- nean, the eastern Pacific and the western parts of the Indian Ocean. More of these re- ceiver stations, which relay distress signals to rescue centers, will be com- missioned throughout the rest of the year to provide global coverage for ships carrying Inmarsat EPIRBs.

With the EPIRBs complementing the Inmarsat-A and Inmarsat-C sys- tems, a shipowner seeking to outfit his vessel in accordance with GMDSS regulations need not look much fur- ther. Satellite communications via

Inmarsat provide the best answer to

GMDSS communications require- ments, particularly for ships in sea areas A2 and A3. And there is an added bonus; Inmarsat equipment is also valuable for commercial and operational communications. With 13 electronics manufacturers of

Inmarsat-A and nine of Inmarsat-C equipment around the world, mari- ners also have a wide range of termi- nal types to choose from to suite their kind of ship. •.LUSTRATION: ftACXO HOLLAND