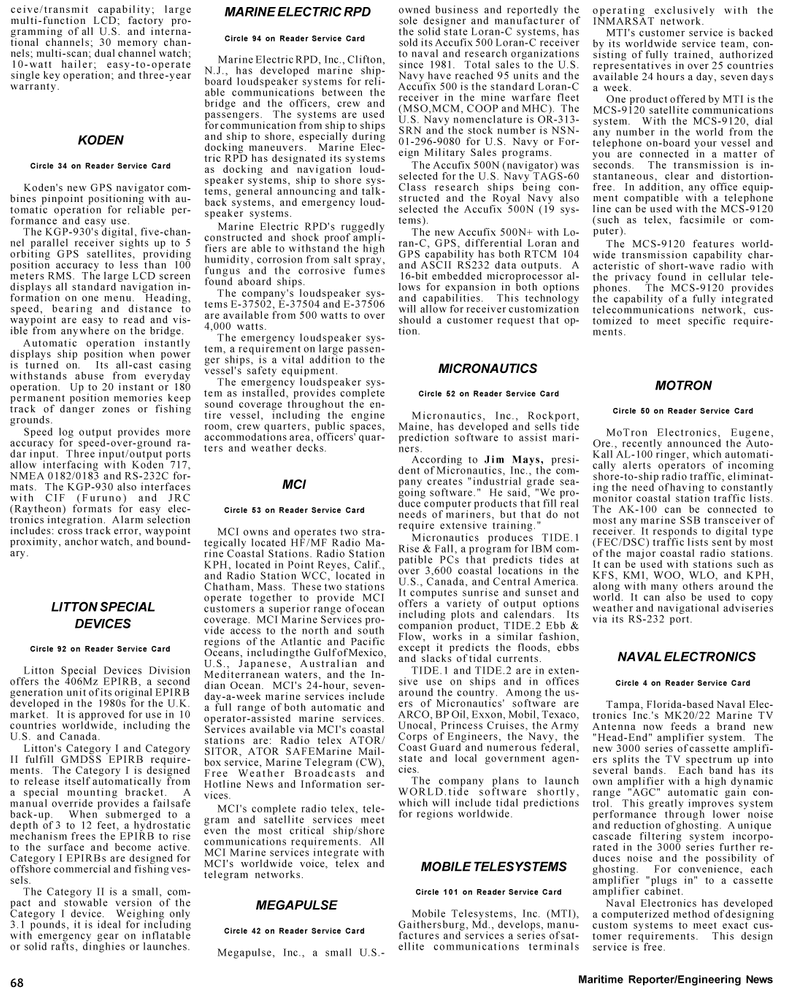 The KGP-930's digital, five-chan- nel parallel receiver sights up to 5 orbiting GPS satellites, providing position accuracy to less than 100 meters RMS. The large LCD screen displays all standard navigation in- formation on one menu. Heading, speed, bearing and distance to waypoint are easy to read and vis- ible from anywhere on the bridge.

Litton Special Devices Division offers the 406Mz EPIRB, a second generation unit of its original EPIRB developed in the 1980s for the U.K. market. It is approved for use in 10 countries worldwide, including the

Litton's Category I and Category

II fulfill GMDSS EPIRB require- ments. The Category I is designed to release itself automatically from a special mounting bracket. A manual override provides a failsafe back-up. When submerged to a depth of 3 to 12 feet, a hydrostatic mechanism frees the EPIRB to rise to the surface and become active.

Category I EPIRBs are designed for offshore commercial and fishing ves- sels.

The Category II is a small, com- pact and stowable version of the

Category I device. Weighing only 3.1 pounds, it is ideal for including with emergency gear on inflatable or solid rafts, dinghies or launches.

The emergency loudspeaker sys- tem, a requirement on large passen- ger ships, is a vital addition to the vessel's safety equipment.

Chatham, Mass. These two stations operate together to provide MCI customers a superior range of ocean coverage. MCI Marine Services pro- vide access to the north and south regions of the Atlantic and Pacific

Mediterranean waters, and the In- dian Ocean. MCI's 24-hour, seven- day-a-week marine services include a full range of both automatic and operator-assisted marine services.

Megapulse, Inc., a small U.S.- owned business and reportedly the sole designer and manufacturer of the solid state Loran-C systems, has sold its Accufix 500 Loran-C receiver to naval and research organizations since 1981. Total sales to the U.S.

Navy have reached 95 units and the

Accufix 500 is the standard Loran-C receiver in the mine warfare fleet (MSO,MCM, COOP and MHC). The

The Accufix 500N (navigator) was selected for the U.S. Navy TAGS-60

GPS capability has both RTCM 104 and ASCII RS232 data outputs. A 16-bit embedded microprocessor al- lows for expansion in both options and capabilities. This technology will allow for receiver customization should a customer request that op- tion.

According to Jim Mays, presi- dent of Micronautics, Inc., the com- pany creates "industrial grade sea- going software." He said, "We pro- duce computer products that fill real needs of mariners, but that do not require extensive training."

Rise & Fall, a program for IBM com- patible PCs that predicts tides at over 3,600 coastal locations in the

It computes sunrise and sunset and offers a variety of output options including plots and calendars. Its companion product, TIDE.2 Ebb &

Flow, works in a similar fashion, except it predicts the floods, ebbs and slacks of tidal currents.

TIDE.1 and TIDE.2 are in exten- sive use on ships and in offices around the country. Among the us- ers of Micronautics' software are

Corps of Engineers, the Navy, the

The company plans to launch

WORLD.tide software shortly, which will include tidal predictions for regions worldwide.

One product offered by MTI is the

MCS-9120 satellite communications system. With the MCS-9120, dial any number in the world from the telephone on-board your vessel and you are connected in a matter of seconds. The transmission is in- stantaneous, clear and distortion- free. In addition, any office equip- ment compatible with a telephone line can be used with the MCS-9120 (such as telex, facsimile or com- puter).

The AK-100 can be connected to most any marine SSB transceiver of receiver. It responds to digital type (FEC/DSC) traffic lists sent by most of the major coastal radio stations.

It can be used with stations such as

KFS, KM1, WOO, WLO, and KPH, along with many others around the world. It can also be used to copy weather and navigational adviseries via its RS-232 port.

Antenna now feeds a brand new "Head-End" amplifier system. The new 3000 series of cassette amplifi- ers splits the TV spectrum up into several bands. Each band has its own amplifier with a high dynamic range "AGC" automatic gain con- trol. This greatly improves system performance through lower noise and reduction of ghosting. A unique cascade filtering system incorpo- rated in the 3000 series further re- duces noise and the possibility of ghosting. For convenience, each amplifier "plugs in" to a cassette amplifier cabinet.